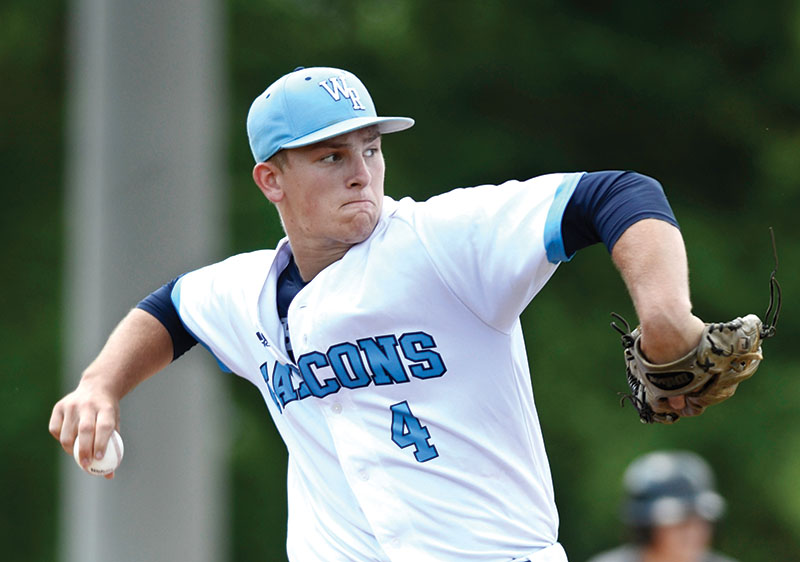 GRANITE QUARRY — Depending upon whom you talked to, West Rowan junior Mykal Berger’s drive down the left-field line in the second inning at Staton Field was foul by 8 inches — or by 8 miles.

The one thing everyone agreed on in both dugouts and in every section of the bleachers was that the ball was clearly foul.

Umpires are human, it’s a tough job, and mistakes occur occasionally. Berger’s foul ball was the biggest play of a Monday semifinal in the East Rowan Spring Break Classic because it was ruled as a fair ball and a bases-clearing double. Those three runs loomed large all afternoon in the Falcons’ 4-3 win against the Greater Cabarrus Stallions.

“We  got a break when we needed a break, but you never know what would’ve happened,” West coach Seth Graham said. “If that ball is ruled foul, both teams are playing the rest of the ballgame differently. Maybe Berger hits the next pitch out of the park. We’ll never know.”

West (16-4) advanced to the tourney championship game tonight against rival East Rowan at 7 p.m. The Stallions (19-7) will be in the third-place game against South Iredell at 4 p.m.

“That ball was foul by plenty,” he said. “So it was really unfortunate, but I’m not going to say umpiring cost us the ballgame. West played very well, and I’m not going to take anything away from them.”

The Stallions — that’s the program Catawba’s star freshman Hunter Shepherd played for in recent seasons — are regular participants in the homeschool World Series and they have an interesting cast of characters. They were taking on the Falcons with eighth-graders at third base and in right field, but they also have studs like senior shortstop Jeremy Whitehead, an East Carolina signee who can play for anyone.

“We knew we were going to have to buckle down and play,” Berger said.

West coach Seth Graham knew it was going to be a scrap and sent his best to the mound — UNC signee Austin Love, a 6-foot-3 mound of muscle who strikes out seven for every guy he walks. The Stallions weren’t intimidated. Whitehead singled to open the game. Rowan County American Legion starter Dalton Lankford singled. When A.J. Knight singled crisply through the right side, the Stallions led 1-0 against a talented right-hander who has an ERA of 0.75. When right fielder Logan Sproul couldn’t corral a routine-looking flyball to right, the Stallions led 2-0.

“I just didn’t see it right away and I hesitated,” Sproul said. “After that, I just wanted a chance to redeem myself.”

Nothing provides redemption opportunities like baseball, and Sproul ‘s chance would come. In the sixth, he would make a tremendous catch.

Love struck out two Stallions with runners at second and third to end the first and kept the Falcons’ deficit at a manageable 2-0.

“We missed a  great opportunity there,” Coach Lankford said.

Stallions starter Camron Wallace sailed through the first inning and took that 2-0 lead to the second against a lineup that includes five seniors who are college commits or signees. Catawba-bound Trevor Atwood whistled a double to left to start the inning. Olen Stamper walked, and after Wallace got a strikeout, Dillon Simpson’s walk filled the bases. Berger was next.

Berger, a right-handed hitter with good speed, made solid contact, but he was certain enough the ball was going foul that he didn’t break out of the batter’s box until people started screaming at him to run.

“I was trying to stay in my gap, but I got out in front of that pitch and pulled it,” Berger said. “I really couldn’t see if it was fair or not.”

Three Falcons whirled merrily around the bases, and the late-starting Berger wheeled into second base with a double. After a spirited argument by Coach Lankford, groans by Stallion fans, and a discussion by the umpires, the call stood, and West led, 3-2.

Love had the most accurate appraisal of the situation.

“The umpire said it was fair, so it’s fair,” he said sheepishly.

West would get another run in the second on a bases loaded walk to Brandon Walton and led 4-2.

Then both starting pitchers settled in.

“The first inning, I was throwing a lot of fastballs and they got some good hits,” Love said. “But we did a better job of mixing in the curveballs after that.”

Love’s curve can be devastating. At one point, 11 straight Stallions went down, all one strikeouts or groundouts.

In the fifth, however, Weston Cregger ended Love’s run of dominance with a leadoff single and scored on a two-out wild pitch. That run cut West’s lead to 4-3.

The rest of the drama happened in the top of the sixth. The Stallions had two men on with one out when a high drive was lifted down the right-field line. Sproul snagged it, sprinting across the foul line. He snow-coned it. A lot of white baseball was visible above the leather.

“That ball was right at the line, and if that falls for a hit, the Stallions probably get us today,” Graham said.

That catch kept Love, who was approaching his pitch-count limit, in the ballgame in the seventh. He was able to finish the Stallions off, and West owned a hard-earned win.

“We weren’t focused for a while, maybe because we don’t play a lot of games at 1 p.m., and we were missing some signs,” Graham said. “But Austin was good and we beat a good team. They battled us.”

NOTES: Besides Sproul’s catch, West second baseman Walton made a terrific play on a ball hit to his right. … Lefty reliever Trent Berry got the Falcons out in the fifth and sixth with no damage.