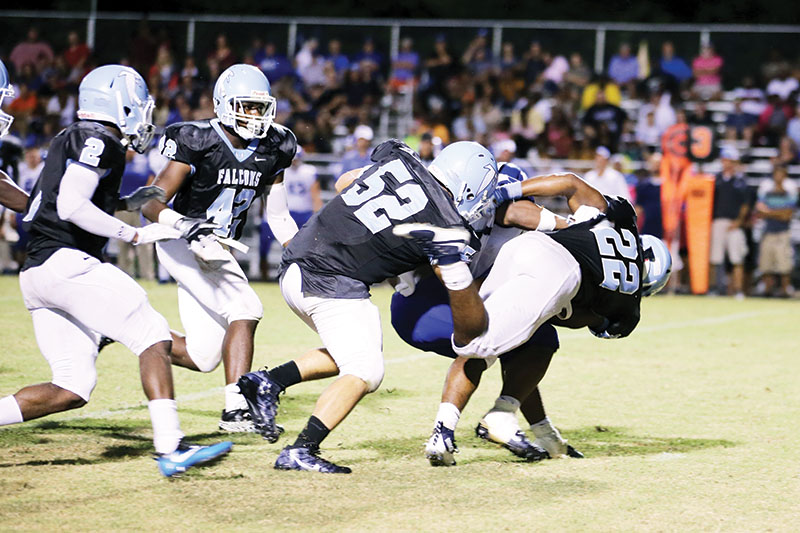 West was in serious trouble against Concord’s Jay M. Robinson on Sept. 9 when No. 22 was suddenly dashing to the end zone for a defensive score. Then Robinson produced a repeat runback on Oct. 10 against Central Cabarrus, when the Falcons were trailing — and reeling — late in the first half.

In a league with two dozen standouts, Robinson was the choice by the SPC coaches as the defensive player of the year. Think about that for a moment. Six of the 10 league members are in Cabarrus County and player of the year stuff can be political, but some Cabarrus coaches obviously voted for Robinson. Maybe all of them did.

“He made 16 tackles per game in a 14-game season,” said West coach Joe Nixon, shaking his head. “He was productive, he was consistent, and he was a great leader.”

Robinson was only co-defensive player of the year in Rowan County, but that’s because North Rowan’s Zion DeBose, a Virginia Tech signee, was busy being … well, Zion DeBose.

Robinson, who made things official last week with Division II Wingate, one of Catawba’s South Atlantic Conference rivals,  announced his college decision late for a player of the year caliber guy.

Character wasn’t an issue. No one has anything negative to say about Robinson.

Grades weren’t an issue. He’s a 3.6 GPA scholar who takes the demanding courses.

“I’ve taken the honors courses since my freshman year,” Robinson said. “Grades always came first in my family. If I didn’t keep my grades up, I wasn’t allowed to be on the field.”

The lone question mark regarding Robinson is size.  At 5-foot-11, 198 pounds, he’s smallish for an athlete who does his best work in the box.

The recruiting trail was bumpy and lumpy, grinding and winding. Robinson was getting handshakes and hugs from quite a few schools in December. Wingate was involved with Robinson right from the start, but so were D-I FCS schools such as North Carolina A&T and Charleston Southern. Robinson was on stand-by lists when National Signing Day arrived in February. If a certain linebacker hadn’t signed with Charleston Southern, Robinson would’ve gotten the next call, but Charleston Southern got the guys it prioritized, and Robinson remained high school’s version of a free agent.

Wingate never poked and prodded Robinson for a commitment, even as February turned into March, and March gave way to April.

Rashaan Jordan, Wingate’s defensive coordinator and defensive backs coach, handled the recruitment of Robinson. No high-pressure, but he made sure to let Robinson know the Bulldogs really wanted him.

“Wingate was one of the first schools that ever talked to me, and all through the recruiting process they stayed patient and allowed me to look at all my options,” Robinson said. “They wanted what was best for me.”

It might have worked out for the best for Robinson. Wingate head coach Joe Reich has built a stable, consistent program. The Bulldogs lost to Catawba in 2016, but they were only a few points shy of making the Division II playoffs. They fell to Newberry, 27-22, in a regular-season finale. If they had prevailed in that one, the Bulldogs would have been part of the postseason dance.

Initially, Robinson figures to provide depth at outside linebacker and strong safety, but he could get on the field early on special teams where his blend of speed and strength comes in handy.

“He gets to the football so well,” Nixon said. “He can run and he can tackle.”

Robinson scored touchdowns on offense, defense and special teams for West. He was a running back until the middle of his sophomore year. At that point, West needed another linebacker more than it needed a third-string tailback, and the rest is history. As a defender, Robinson became a game-changer and a program-lifter. He made the calls as well as the tackles, and he made everyone around him better.

“L.J.’s brother (West’s Julian Samolu) was a county player of the year and his cousin (North Rowan’s) Xavier Robinson was a player of the year,” Nixon said. “That family has produced great linebackers, and L.J. has carried on that tradition. He’s just a really intelligent kid. He’s got plans and goals that go beyond football.”

Robinson helped the Falcons win 28 times the last three seasons, including four playoff games. In West’s 35-7 pounding of Crest in the second round of the 2016 3A  playoffs — an emotional victory that shocked a lot of people — Robinson was at his finest.

“He’s a great player,” Nixon said. “I believe he can do the same things for Wingate that he did for us.”