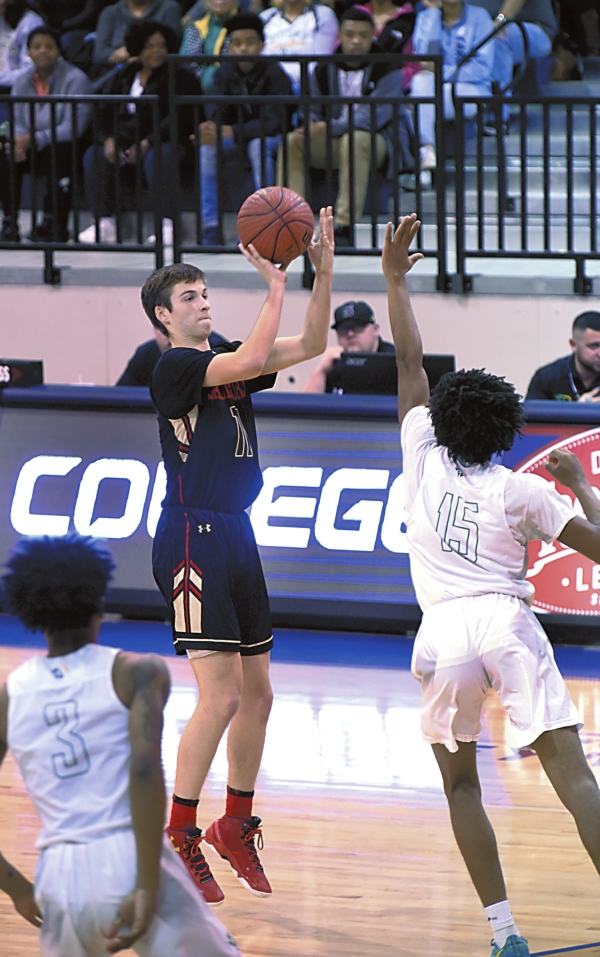 Wayne Hinshaw file /for the Salisbury Post ... Salisbury’s Will Leckonby, left, shoots over North Rowan’s Cortez Watkins (15) during a game on Feb. 10, at Goodman Gym. Leckonby has announced that he will continue his education and basketball career at Guilford College in Greensboro.

SALISBURY — On the night of Jan. 5, 2016, Salisbury High guard Will Leckonby made eight 3-pointers against East Davidson — in the first half.

The 6-foot-3 Leckonby has a fluid, accurate 3-point shot, and the ability to connect from long range is giving him a chance to play college basketball, while he pursues a degree in sports management. Leckonby made things official with Guilford College, a thriving Division III program, on Tuesday.

Leckonby, a strong student, was Salisbury’s No. 3 scorer as a senior, contributing 10 points a game. More than 80 percent of his points this season came from long distance.

Honorable mention All-Rowan County and a member of the All-Central Carolina Conference team, Leckonby made 59 3-pointers as a senior and bombed 123 long ones during his three-year varsity career.

“Will was a pleasure to coach,” Salisbury head coach Bryan Withers said. “He gives you everything he has and he can fill it up.  He can change games in a hurry. I know he changed a lot of them for us.”

The Leckonbys arrived in Salisbury prior to Will’s sophomore year when Larry Leckonby, his father, was hired as Catawba College’s athletic director. Leckonby had been the AD at The Citadel in Charleston, S.C.

“In Charleston, I hadn’t played a lot on the jayvee team as a ninth-grader,” Will said. “I remember going to Salisbury’s first open gym before my sophomore year. No one really knew who I was. I was just trying to fit in.”

Jason Causby was Salisbury’s coach then, and he recognized that Leckonby was potentially the best shooter in the school. So Leckonby was on the varsity as a sophomore. His first game action in a mop-up role of a blowout win against South Stokes didn’t go well. He was nervous. He went 0-for-4.

Causby gave him another chance four days later, and he changed a game for the first time for the Hornets. He made two 3-pointers as Salisbury pulled out a tight struggle against South Iredell.

“I think I played about 10 seconds total and one of those 3s bounced around and hit everything before it went in, but that’s where it started for me,” Leckonby said with a smile. “I started playing more. Then I became a starter.”

Leckonby scored 14 against East Davidson and 16 against Thomasville. He shot a solid 39 percent from the 3-point line as a sophomore and led the Hornets with 25 3-pointers.

As a junior, Leckonby made 39 3-pointers and helped the Hornets go 18-5 in Withers’ first season as head coach. He scored in double figures six times.

“The biggest thing for Will is just keeping his confidence after a miss or two,” Withers said. “Everyone misses. A shooter has to keep shooting.”

Leckonby’s senior year was his best. There were 10 double-figure games. He had outstanding outings against 4A schools Lake Norman (18 points) and Greensboro Smith (24).

Leckonby kept adding inches and pounds in high school, and he’s a lot stronger now than when he was a sophomore. So his game should keep expanding as well. He doesn’t mind the shooter label — it’s what he is — but his impact at Guilford probably will be determined by how much better he can become as a defender and rebounder.

“Guilford is a good defensive team and plays a lot of man-to-man,” Leckonby said. “I’m working on my defense.”

“I started looking into it, and I found out Guilford was a great school with a really good basketball program,” Leckonby said. “I sent them film and then they came to a few of my games.”

There also was an old connection with Guilford. Tom Palombo, the head coach and AD at Guilford, has known Larry Leckonby a long time. Back in 1991, they were both at Old Dominion University; Larry as assistant AD and Palombo as a graduate assistant.

Palombo has enjoyed major success in 14 seasons at Guilford. The Quakers won the 2017 Old Dominion Athletic Conference regular season and tournament championships and made it to the second round of the D-III playoffs.

Leckonby’s recruiting decision came down to Guilford and Hampden-Sydney, a Virginia school that competes against Guilford in the ODAC. Leckonby visited both schools more than once before deciding on Guilford, the only North Carolina school in the league.

“The school, the coaching staff, the players —it all seemed like the best possible fit,” Leckonby said.