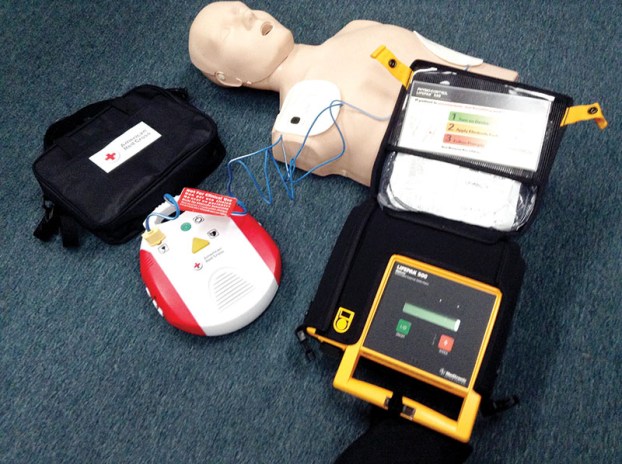 An AED defibrillator trainer is hooked to a dummy showing proper placement of the pads. The machine instructs proper steps in initial treatment following cardiac arrest. The trainer unit is on the left and the actual AED is on the right. CPR certification now includes AED training for use after cardiac arrest. Photo by David Freeze.

Well-known personal trainer Bob Harper is fortunate to be alive today after suffering a massive heart attack Feb. 12. Near the end of a workout session at a New York City gym, Harper stayed on the floor longer than he should have. After realizing that Harper was not just resting, the coach was able to find two doctors at a separate meeting in the gym who quickly grabbed the AED Defibrillator Unit and began to administer CPR.

Harper, 51 and a long-time trainer for “Biggest Loser” participants, survived the “widow maker” heart attack because several things were done right. Harper was in great shape physically, the doctors were close by and so was the AED unit. Normally with any heart attack, seconds and minutes matter and no time was wasted in Harper’s situation. Harper said, “Survival rate of this particular heart attack is only about 6 percent, so I was very lucky. I made some mistakes too. I didn’t pay attention to recent dizzy spells or that heart disease runs in my family.”

Per NBC, more than 326,000 people suffer some type of “out of hospital” cardiac arrest annually, with the overall survival rate at about 10 percent. However, that rate increases dramatically with use of the AED unit, rising to about 30 percent. An NBC follow-up story went to other local gyms and asked patrons and staff about the AEDs, where they were located and how they worked. The findings were not very positive. Harper said that he would never again work out in a facility without one.

With the national coverage of the Harper story, local gyms have been asked by patrons about preparedness for cardiac arrest situations. The three Rowan County YMCAs have trained CPR staff and defibrillators at each branch. YMCA CEO Jamie Morgan said, “The Y provides a comprehensive training program for the staff that equips them to assist in medical emergencies.” All full-time and part-time staff are trained in CPR and first aid. The defibrillators were first purchased about 13 years ago at a cost of $1,500 to $2,500 each. The Y has upgraded the units over the years as technology has improved.

An AED unit operates on its own after two pads are attached, usually one to the victim’s left chest above the nipple and another to the right side of the torso below the nipple. The responder stands back to wait on directions from the unit after the pads are attached. Voice commands from the unit can include “Analyzing rhythm, everyone stand clear and begin CPR.” The AED then reanalyzes and provides further instructions. South YMCA Membership Director Tommi Burgess said, “We just keep doing CPR and following instructions until emergency service personnel arrive.”

Quick action and the use of the AED helped a 19-year-old basketball player survive at the Hurley YMCA in 2009 while a walker was brought back to life by use of the AED several years earlier at the South YMCA.

The Forum has all staff trained in CPR and AED usage and has next-door EMS service. General Manager Rayna Gardner said, “We have been asked at least three times this week about the AED units. Bob Harper wants everyone to go to their workout facility and ask about the AED and where it is located. Our members thought it would be a great idea to have an AED unit on site for the quickest possible response. I agree and will make sure that we have one very soon.”

Nick Aceves, Salisbury Parks and Recreation Director, said, “AEDs are an important and costly piece of equipment that you hope to never have to use. Our plans are to order and mount AEDs at our recreation centers and have staff trained to operate them in upcoming weeks. Full-time staff are CPR certified and part-time staff will soon be.

Planet Fitness General Manager Emily Cruse said, “When our facility is open, even during the 24-hour days between Monday morning and Friday evening, we have all trained CPR staff and an AED on site.”

YMCA members on hand at South on Friday were glad that the AED units and trained staff are available. Brenda Richards was working out on a machine and was aware of the Harper story. She said, “I have had heart problems too and spent four days in the hospital in 2004 with a heart ablation. Minutes matter, seconds matter. Those AEDs are worth everything they cost. Not having one available could scare the daylights out of me.”

Preston Penninger and Chris Durant were working out together. Durant said, “We have AEDs at Duke Energy all over the place. I haven’t had training on them but know that I need it.” Penninger added, “I’m familiar with the widow maker heart attack. We definitely need CPR and the AED here in the gym, a place where the main purpose to be here is to get your heart rate up!”