Save this dance for Doris: She’s 100 years young and staying busy 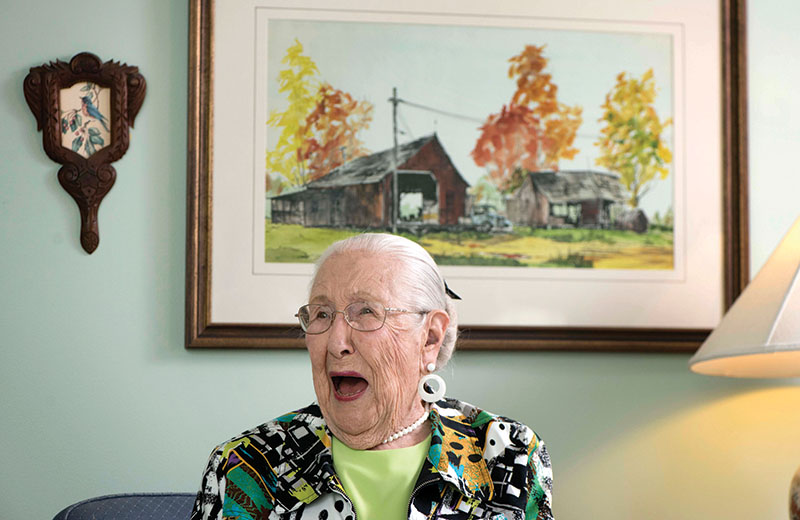 SALISBURY — When a fellow resident at Trinity Oaks heard Doris Miller was approaching her 100th birthday, she looked hard at Doris and delivered this line:

“Well, you don’t have much to look forward to.”

Miller sparkles in the retelling.

Even though Doris Mendenhall Miller was born April 6, 1917 — the same day the United States entered World War I — you quickly realize age, and the fact hers is now in the triple digits, doesn’t mean much to Doris.

It’s difficult to find a more positive or busier human being.

She likes to do three crossword puzzles every morning — those in the Salisbury Post, Charlotte Observer and USA Today. Between her own subscriptions and copies made by friends at Trinity Oaks, Miller gains access to each one, and she completes them by lunch time.

In the evening, she tunes to her favorite television shows — “Wheel of Fortune” and “Jeopardy!”

“It’s also a good time to take a nap,” she says with a laugh. “It’s right after dinner.”

Doris plays bridge on Monday afternoons, Wednesday evenings and alternative Tuesdays. Always a singer, she lends her soprano voice to the Trinity Oaks chorus on Thursdays. Saturday, there’s bingo at 1 p.m., and during the fall, home football games at Catawba College.

She watches the football games from the press box, thanks to her daughter Jean Wurster’s status as a former first lady of the college.

Miller enjoys the 4:15 p.m. wine-and-cheese reception held every Tuesday at Trinity Oaks, and on Sunday, Jean picks her up and they head off for the morning service at First Presbyterian Church.

She calls Fridays her “nothing day.” She reflects for a moment and  acknowledges, “I’ve always been a rather busy person.”

Her best friends at Trinity Oaks, where she has lived in the same apartment since 1995, are Helen Barber and Myretta Castellani. “They take the very best care of me,” Doris says.

And she likes to visit Jean’s house on occasion, where she catches up with longtime friend James Taylor and the couple’s dogs, who are always glad to see her. Otherwise, Jean calls Doris every morning, usually in the middle of crossword time.

In a video made by granddaughter Liz for her 98th birthday, Doris was asked to reflect on her life and what advice she would give others. The answer seemed easy for Miller.

Love your neighbor, she said. Love the world. Be thankful for all the blessings. Do all you can to be kind to people. In a separate interview recently, Doris also gives this suggestion for people who want to live longer:

“Everything in moderation,” she says.

Doris broke her own rule when it came to one thing: dancing. She and her late husband, Russ, danced more than any other couple she ever knew.

They danced the first time they met — a blind date in Lincoln, Neb. — and they danced together in their kitchen in Seven Lakes, N.C., not long before Russ died in 1994. They were married for 56 years.

“We had a good life,” Doris says. “We started out dancing, and we danced all through life.”

Her four grandchildren have always called her “Grimmy,” and she once told Liz she tries to do at least one thing to help someone each day.

Jean thinks that’s how her mother always will be remembered — as a woman who simply loved her fellow men.

But if you know Doris, she lives for the moment. One of those moments came Saturday afternoon when a large gathering of friends and family celebrated her 100th birthday in a big room at Trinity Oaks.

Taylor, an accomplished artist, surprised Miller with a portrait he had painted of her. It captured the essence of Doris, and made you realize why she won the “Better Babies” contest at the South Dakota State Fair in 1918.

Doris protests, noting that it wasn’t completely a beauty contest, rather one that measured both mental and physical attributes of the babies who were entered. She scored 98.5 points, according to the judges.

A century of living has these kinds of triumphs. Doris puts her marriage to Russ and their adoption and raising of twins Jean and Jack at the top of her list.

The tough losses have, of course, been the passing of Russ and the death of Jack in 2013.

Born in South Dakota, Doris was much younger than her sisters Lillian, 15, and Thelma, 13.

Thelma adored her baby sister, and it was her idea to enter Doris in the State Fair contest. When Doris was 6 years old, her father, Harry, traded farmland in South Dakota for land in Nebraska.

Harry Mendenhall was a teacher and farmer. The farming did not go well, thanks to the money Harry still owed on the land, the low prices for corn and a drought during which the family’s well went dry.

The Mendenhalls had to borrow water from neighbors for their cattle. “Being the only ‘boy,’ I had to help do things also,” Doris says.

“We were poor, we just didn’t know it. We were not poor in spirit, and I think that made a lot of difference.”

During the drought, she recalls her embarrassment at having to ride a mule to where the cows had been led to some natural grass. She hoped none of the neighbor boys had seen her.

“Needless to say,” she adds, “I did not want to marry a farmer.”

In the grammar school years, she walked a mile to class. In high school, she walked a good distance in the other direction to where some boys with a car would transport her to Gretna High.

On the bitterly cold days, her father would wrap Doris in a blanket and walk with her until they reached her pick-up spot. They drank coffee together to stay warm.

Doris did well in school and had a scholarship offer to attend Nebraska Wesleyan, but even with the scholarship, she couldn’t afford the meals, boarding and clothes she would need.

There was another reason she snubbed the scholarship.

Doris took courses at a business college instead, then worked in virtually every government office in the county seat, thanks to her typing skills.

She ended up being employed by the Resettlement Administration, progressively going up the ladder from the county and district offices until she reached Lincoln, where she was secretary to the head of the security division.

Her parents eventually rented out their farm and moved to Lincoln to be with her. Harry bought her a 1926 Model A coupe. She recalls driving her car and wearing a rabbit fur coat on that first date with Russ, who had one more year to go in dentistry school at the University of Nebraska.

He called her the day after their first night of dancing, and they married in 1938. It happened Russ was from Moral, Kan., the same hometown as Doris’ mother. His father’s family and her mother’s family actually had come to the Midwest years earlier from the same area of Pennsylvania.

“I went into the Miller family as the golden child,” Doris says.

What attracted her to Russ? Doris says it was his dancing, his looks, his kindness — “and he was almost a relative,” she laughs.

“We did seem to have an instant liking to each other.”

Russ, a reserve officer in the Army, set up a small dental practice in Kansas. When World War II came and he was called to active duty, the couple moved to Fort Leavenworth, 60 miles away.

Russ’ commanding officer was a former classmate friend from Nebraska, plus the general’s wife liked Russ as her dentist. Those things combined to keep Russ and Doris at Fort Leavenworth for the rest of the war.

The life of Doris and Russ changed forever April 23, 1945, when they brought adopted twin babies, Jack and Jean, home in their car.

They opened up a piece of Samsonite luggage on the back seat and placed a baby in each half.

Born prematurely, the babies were only two months old.

“And our wonderful life began,” Doris says. “Oh, if that wasn’t something to see, those little babies.”

They were able to adopt the twins from The Cradle, what Doris considered Kansas City’s finest adoption agency.

“We gave her a run for her money, too,” Jean says.

“I was the luckiest person,” Doris adds. “… Raising twins is an interesting thing.”

The family made Hiawatha, Kan., their home. Jean was into music; Jack, music and sports. In summer, the family would take fishing trips to Minnesota; in the winter, skiing trips to the Ozarks.

Doris served as president of the state dental society auxiliary in Kansas.

She also became a homemaker and a terrific seamstress. She made all of Jean’s coats, suits and dresses — even formal wear. “I’m kind of poofing out on that,” Doris says of sewing today.

But she can still thread a needle, and she still sews a lot of things by hand.

Russ retired in 1974. He loved to play golf, and the couple moved to a golf-oriented community in Bel Vista, Ark., where Doris served on the building committee for a new church and started a community concert series.

Russ also liked living by a lake, and the couple had a pontoon in Arkansas and a ski boat by the time they moved to Seven Lakes, N.C.

In addition, they bought a travel trailer and ended up driving it annually to Mexico, where they made lifetime friends with another couple.

By living in Seven Lakes, Russ and Doris were less than two hours away from Jean and her three children, Mark, Liz and Gregory. “It was wonderful,” Doris says.

After Russ’ death and her move to Trinity Oaks, Doris and Jean traveled a lot.

“We found out we were very compatible,” Doris says.

Once, they headed back to Kansas to visit their old stomping grounds. They also took trips to Spain, the British Isles and both sides of Canada. At times, Liz or Jean’s sister-in-law, Gwen, would travel with them.

Jean thinks if her mother hadn’t devoted herself to raising twins, she could have been an architect. Doris doesn’t dispute that observation. She says she always had a fondness for math, buildings and drawing things to scale.

Throughout her life, Doris has been a healthy, stylish person. When she goes to breakfast, she is dressed smartly for the day, and she eats a hearty breakfast of grapefruit, ham biscuits, V8 juice, strawberries and yogurt.

If she has a pet peeve, it’s with people who don’t pay attention to their posture. She sees it at church all the time — “people who go down the aisle like they’re plowing corn,” Doris says.

In the early 1980s, Doris had surgery for breast cancer. Otherwise, her main medical complaint — and she never complains much — is arthritic knees. At her yearly checkups, her longtime doctor, now retired, would ask what her secret was before quickly adding:

“Well, whatever it is, keep doing it.”