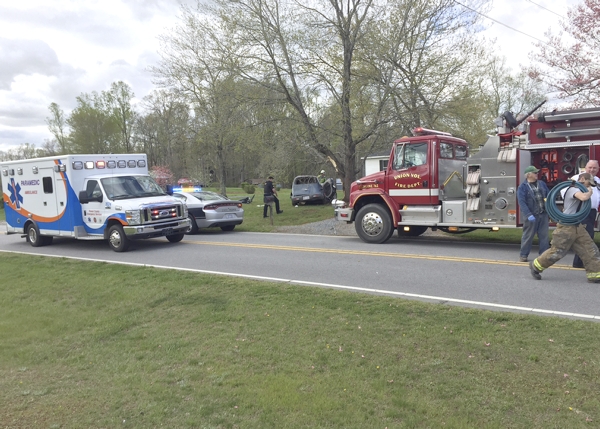 Emergency crews respond Thursday to a single-vehicle crash at 2220 Barger Road, near Stokes Ferry, where Felisha Ann Blackwelder, and her five-year-old daughter were trapped inside this PT Cruiser. The mother was seven months pregnant and ran off the road, overcorrected, struck both a culvert and a tree. Photo by David Whisenant

WINSTON-SALEM — A pregnant mother and her 5-year-old daughter who were involved in a single-vehicle crash Thursday on Barger Road remain hospitalized with serious injuries, according to social media posts by family members.

Felisha Ann Blackwelder, 24, who was 30 weeks pregnant, was traveling in her 2003 PT Cruiser on Barger Road before 11 a.m. when she ran off the road. She overcorrected, struck a culvert, overturned at least twice and struck a tree. The vehicle was pinned against a tree on the passenger’s side, where the child was sitting in her safety seat.

The 5-year-old, Aubrey, had seizures and was taken to Novant Health Rowan Medical Center and placed on a respirator and given paralytic medicine. She was later transferred to Wake Forest Baptist Medical Center in Winston-Salem and underwent surgery.

According to an online post, doctors had to relieve pressure on the young girl’s brain stem. She is stable but remains in critical condition.

Felisha Blackwelder underwent an immediate C-section. The baby boy, Kamden, weighed 3 pounds and underwent surgery for a broken pelvis. He is also stable but critical.

Blackwelder had a breathing tube removed and suffered a fractured collarbone but did not require further surgery.

Blackwelder and her husband, Johnny, have three older children, who will be staying with relatives. Johnny Blackwelder is on a waiting list for a room at the Ronald McDonald House. Relatives say the Blackwelders could use help with gas money and bills because Johnny Blackwelder will be out of work.

A Go Fund Me page was set up Friday by Nikki Leonard, who asked for prayers for the family. The page is at https://www.gofundme.com/helping-dad-stay-with-his-family.

Efforts to reach Leonard and other friends and family were unsuccessful.