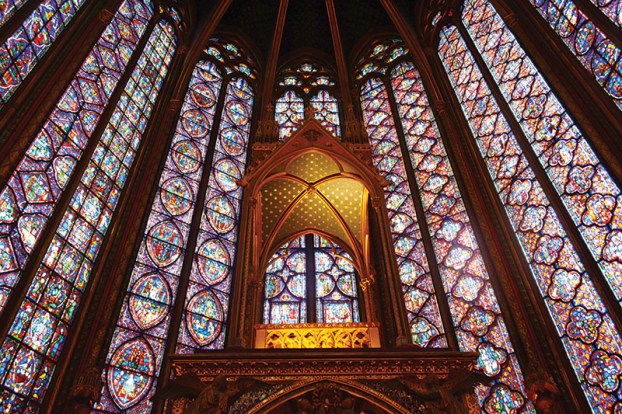 'There’s just no way to take it all in.' What could be more romantic than a honeymoon in Paris? Not much, I have to tell you.

When Jim and I decided to get married, we decided that the trip we’d planned to Paris would be our honeymoon. It would work out perfectly: my son, Andrew Poe, was flying home the morning of March 12 from London, where I’d spent nine days with him as a chaperone for a group of Catawba students. Jim would fly in. We’d meet at my hotel, and then walk across to our hotel on the other side of Russell Square — small, quiet boutique hotel, which was a definite upgrade for me!

That’s just how it happened, except when Jim arrived at the huge Royal National Hotel, he couldn’t figure out where my room was. I just happened to be looking out the window at the time — he’s 6 foot, 5 inches tall, hard to miss. I yelled down four floors but he couldn’t hear me — imagine that.

So I dashed down the stairs and across the courtyard, wet hair and barefoot, to meet him.

He said that was the best part of the trip.

As I said in the previous article, London is an extremely walkable city, so we put more miles on my Fitbit in those couple of days.

I will say that the maps feature on the iPhone is invaluable in cities in which you’re unfamiliar. You probably know you can choose your route by walking, driving or transit. That said, the maps work only if you have a signal — which, surprisingly, was a bit spottier than I’d anticipated. The next time I travel overseas, I’m definitely purchasing a data package. If you know me, you know how I like to stay in touch. But in an unfamiliar city, maps are indeed critical. (And you know my husband wasn’t gonna stop and ask…)

We finally made it to the war rooms, which was a fascinating place. The only problem was — I get claustrophobic, as I’ve said before. We got temporarily separated — I tend to buzz through exhibits, while my husband likes to take his time. This is an advantage because then he’ll give me a synopsis of what I’ve just seen. Works for me.

Thanks to the nice staff members who went and retrieved him as I was on the brink of panic — OK, fine, well past the brink — I emerged relatively unscathed. War is hell, after all.

After a couple days in London, we’d decided to take the Chunnel to Paris rather than fly. No matter where you go in a large city and no matter what transit method you use, it takes time to move around. Don’t forget to build plenty of transit time into your itinerary.

I would love to tell you about the Chunnel itself, but the idea of traveling in a tunnel under the ocean made me, you guessed it, claustrophobic. I take nice little pills when I fly, so I did the same in the Chunnel. Go to sleep in London, wake up in Paris. Vice versa. Works for me.

It had been years since I’d been to Paris, so Jim took the lead for this part of the trip. We stayed in a lovely, quiet hotel just minutes away from Notre Dame. We were served breakfast by a lovely Indian woman. After the first day, she knew our order from then on. I probably ate my weight in croissants in Paris, but thanks to all the walking, my Weight Watchers buddies will be glad to know I gained no weight.

The main thing on our itinerary — actually the only real item, to be honest — was to see the Louvre. We did that on Wednesday of our trip. It’s the world’s largest museum, so you just kinda have to see what you can and let it wash over you. Of course we saw the Big 3 — Mona Lisa, Venus de Milo and Winged Victory. I’d like to point out that they’re all ladies, and all beautiful, each in their own way. Of course, there were crowds at each of these locations, but the rest of the museum wasn’t bad, crowd-wise. You have to remember, after all, I’m a girl from a town with one stop light. Anything like that overwhelms me.

Afterward, we took a stroll through the gardens adjacent to the Louvre. As in London, more than a hint of spring was in the air, and the cool air was refreshing.

Visiting churches was also a priority for us. We visited Notre Dame late one afternoon, after we’d just missed admission to Saint Chapelle. We just missed a lot of things on this trip, but after 9 days on the go with 16 other folks, I was OK with the slower pace. Also, it gives us an excuse to go back.

My father wanted me to see Saint Chapelle. So we got up early our last morning in Paris, to walk the short distance to this church, located a couple of blocks away from Notre Dame.

The windows in Notre Dame are impressive, to be sure, but they pale in comparison to the much smaller Saint Chapelle, whose 15 windows are filled with stories from the Bible. There’s just no way to take it all in. Again, it’s a seemingly tiny space compared to Notre Dame, but the windows, recently restored, are simply breathtaking.

On the list for next time: Musee d’Orsay. To me, it looked so much smaller than the Louvre, but turns out to be ranked number 10 in the world in size. Who knew?

As in London, we walked all over Paris. We weren’t familiar with the Metro, so we just decided to walk wherever we went. Again, we lost some time doing this, but that was OK. Our farthest destination was to the Eiffel Tower, three miles away. The walk was fine, but it was our warmest day, and I thought I was going to die of dehydration until Jim finally found some water for me. Thankfully, I did not die. Jim has found that I tend toward the dramatic at times. OK, fine, most of the time.

(This would be a good place to tell you that the weather in London, and Paris, too, tends to change rapidly throughout the day. Wear layers, and pack an umbrella — or better yet, a waterproof, windproof coat. And a hat. When I was buying a scarf in Paris, my husband asked, “How many scarves do you need?” A lot. That’s the answer. A lot.)

As it turned out, we approached the Eiffel Tower from the back, where there happens to be a lovely little park, complete with benches, a small pond, and a weeping willow just under the enormous tower. A perfect spot to contemplate the future together.

As you might imagine, Paris has a plethora of places to eat. There are cafes, bakeries, sandwich shops and fancier places. While we didn’t eat anywhere particularly fancy, we did have wonderful meals at local spots nearby. If you don’t know where to go, ask the hotel concierge staff. They’re happy to help. Also, the wait staff is extremely helpful. We found most eager to translate and practice their English — which, as it turned out, was way better than our French. We said “merci” a lot.

And the bread. I mentioned the bread, right? Each morning, we were both given a small plate of bread — croissant, baguette, pain au chocolat (I saved that for “dessert). Our Indian hostess even gave Jim “special bread” one morning, a baguette fresh from the bakery.

Gardening season is in full swing and the phones, visits and programs have been non-stop. Last year, we had great... read more