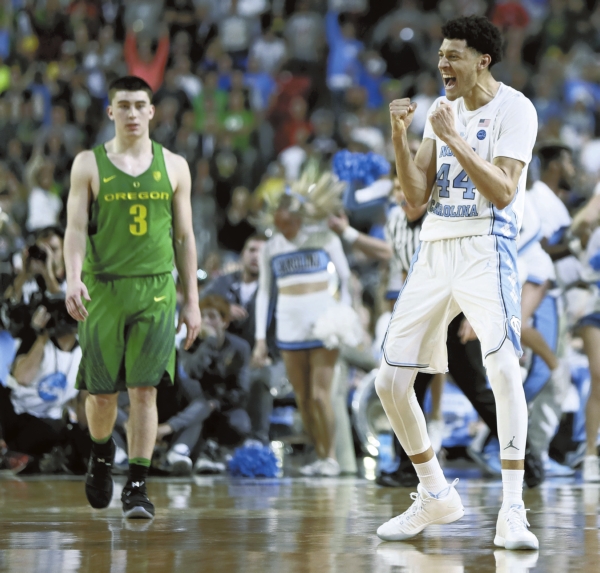 Tar Heels return to big game; Meeks saves the day as Carolina holds on against Oregon Kennedy Meeks saved the game. No surprise there, either.

Meeks, the only Tar Heel who could shoot straight Saturday night, grabbed the game-saving offensive rebound in a 77-76 victory over Oregon after ice-cold Carolina missed its fourth straight free throw down the stretch.

All part of a career night for the North Carolina senior, who was on the bench last year when Villanova devastatingly ended the Tar Heels’ chance at a title with a 3-pointer at the buzzer.

In this one, Meeks was front and center. He finished 11 for 13 to match his career high with 25 points. And he had 14 rebounds, eight of which came on the offensive glass and none that was more important than the last one. It secured a Monday-night date with Gonzaga in the title game, where the Tar Heels (32-7) will go for the program’s sixth title.

“If it wasn’t for Kennedy Meeks, we wouldn’t have been in the basketball game,” Carolina coach Roy Williams said.

Meeks had plenty to mop up for.

The rest of his team shot a brick-a-minute 14 for 55 from the floor (25 percent). Justin Jackson was one of the few to break through. He had 22 points on 6-for-13 shooting and made three 3-pointers and two free throws to help the Heels to a double-digit lead and put them on the verge of a runaway midway through the second half.

Given the late lead and Oregon’s own awful shooting (37 percent), losing this one might have felt every bit as bad as the Villanova loss last year for this, a team on a mission with only one acceptable destination.

“I just didn’t want to lose another game off a winning shot,” said Joel Berry II, whose second missed FT got scooped up by Meeks. “I wish we would have closed it out.”

North Carolina led the entire second half and appeared poised, time after time, for a knockout of the never-say-die Ducks (32-7).

Never happened. And after Keith Smith’s layup pulled Oregon within one with 7 seconds left (should Oregon have pulled it out for a game-tying 3? Maybe so.), it looked like it would come down to free throws.

It did, and it wasn’t pretty.

First, Meeks got fouled, stepped to the line and rimmed out two. But Theo Pinson got inside and batted the ball back out to Berry, who then got fouled with 4 seconds left and took his turn at the line.

Berry missed both, too. But Meeks outmuscled Jordan Bell for that final rebound, threw it outside, and this ugly affair was over.

“My main focus was, if Joel missed the second free throw, to hit the offensive glass hard,” Meeks said.

That it came down to Carolina winning on the boards was no big surprise. This was the best rebounding team in the country this season, grabbing an average of 13 more boards than their opponents over the course of the season.

Against the Ducks, the rebounding battle was even (43 each), though North Carolina got five more on the offensive glass, which resulted in 19 second-chance points, 10 more shots and, eventually, the win.

“We talk and work on little things all the time,” Williams said. “You’re trying to tip it out or get a rebound. We do work on those things we do talk about those things.”

Not that Oregon was lighting it up, either.

The Ducks went 3 for 18 from 3-point range in the second half and had a stretch of nearly six minutes late where they did not make a shot from the floor.

Tyler Dorsey, nicknamed Mr. March for his sensational shooting in the tournament, led Oregon with 21 points but scored more from the free-throw line (12) than from 3-point range (nine).

Pinson made his first 3 of the tournament and had helped Carolina keep the ball after Meeks’ pair of misses. Pinson finished with eight points and eight boards.

The Tar Heels were happy afterward. But boy did they make it interesting.

ANKLE TROUBLE: Berry played, as promised, but his shot looked troubled by the injured ankles that limited him in practice all week. He was 2 for 14 from the floor and 5 for 9 from the line and finished with 11 points.

MR. MARCH: Dorsey had been lighting it up through the tournament, shooting 65 percent from 3, but the Tar Heels got in his face early and he never got on track. His 21 points came on 11 shots from the field and he only went 3 for 7 from behind the arc.

BROOKS STRUGGLES: Dillon Brooks has been the leader for Oregon all season, but struggled, finishing with 10 points on 2-for-11 shooting before fouling out.

GOOD COMPANY: According to ESPN Stats and Info, Meeks joins Larry Bird, Ed O’Bannon, Carmelo Anthony and Danny Manning as the only players to reach 25 points and 14 rebounds in the Final Four over the last 40 years.

NEXT UP: Carolina vs. Gonzaga in the title game Monday. Ducks’ season over after falling a game short of returning to the title game for the first time since 1939, the first NCAA Tournament.

By David Shaw sports@salisburypost.com LANDIS — It appears the South Rowan girls soccer team has skipped all of the ugly... read more