‘So many people from so many places’: Pickleball craze continues to sweep Rowan with first competitive tournament 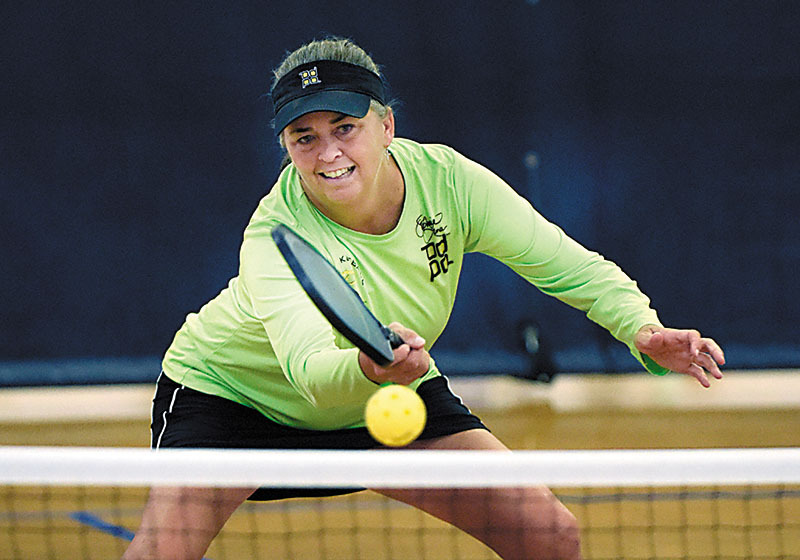 Stephanie Lane, one of the top women players in the US, came from Tennessee for the tournament. photo by Wayne Hinshaw, for the Salisbury Post

After three ACL surgeries while playing soccer at Pfeiffer, Sarah Yates decided that she needed to give up the game and compete in something a little easier on the body. Yates, originally from Fort Myers, Fla., became a nurse and moved to Winston-Salem. She began to “dink around,” a term that refers to learning the game of pickleball, with her fiancée’s family. Yates said, “I also got help from Marcus Luke, a top level national player. Soon I was hooked and I had a big pickleball family. My brother, Kyle, just beat the No. 1 player in the country yesterday.”

Now a quality player herself, Yates teams with Lloyd Ford, former No. 1 women’s tennis player at UNC in women’s doubles. Yates said, “I wouldn’t be as successful without Lloyd. I have a great partner.” After her fourth ACL surgery, this time after an injury on the pickleball court, Yates couldn’t wait to get back to the game. She added, “Watching was hard. I worked double time to return as quickly as possible.”

Luke, a Level 5 pro, travels the country playing in tournaments and as an assistant district ambassador for the sport. Luke helps with promotions and clinics in Florida, Alabama, Georgia and the Carolinas. He said, “My transition was from tennis to pickleball. I love the social aspect, have more friends than ever and 90 percent of them play pickleball. It is the sport of the masses.”

Pickleball combines certain aspects of table tennis, tennis and badminton and uses a ball similar to a wiffle ball. The game originated in Washington in 1965 and is recognized as the fastest growing sport in the world.

The Salisbury Rotary organized this first competitive local pickleball tournament. Jonny Post is the very busy tournament director and already had many of the contacts with out of town players. He said, “So many people from so many places. We have folks here from seven states.” Brad Bost, Salisbury Rotary President, said, “This tournament has 141 participants and the proceeds will go toward two Rotary projects. Happy Feet is a program designed to put new shoes on third graders and we did that for 90 kids. Next year, we want to do the same for 100 kids. The other project is Rotary Reads for kids, K-5th grade, who get prizes and awards for reading more. This is done through the school system and Rotary across the country.”

Felipe Goodman and his dad, Mark, drove in from Mooresville to compete in the round robin event on Saturday. They played men’s doubles and were guaranteed at least four matches while they hoped to play two more by competing in the medal round. Felipe, 17, said, “This is only our second tournament. I play a lot of tennis, which is different but some of the same. I like playing anything and being active and pickleball is fun.”

The top ranked player nationally who competed Saturday was 49-year-old Stephanie Lane from Nashville, Tenn. In 2016, Lane’s national placements were third in open women, third in open mixed doubles and third in 35 and up women. Her team was first in the nation in the 19 and older mixed doubles competition. A tennis star while at Lipscomb University in Nashville, Lane has been playing pickleball for five years. She said, “For me, that means traveling just about every weekend to clinics or tournaments.”

Also competing was Lane’s daughter, LeEllen, who will celebrate her 14th birthday a week from Monday. She said, “I have been playing competitively for two years and I got involved through my mom. All my closest friends play pickleball and many of them have either been an inspiration or partnered with me. Pickleball helps my tennis, too.”

Rotarian Greg Dunn from Salisbury is an avid player and says it is easy to get started, “It only takes 2-3 games to get the basic hang of it and know how to keep score. Nobody gives it up because other players want to help you get started. We are all in the game together, no “us versus them” and there is only constructive criticism. It’s a great game for all ages and is relatively inexpensive. Local clinics are available and women are as good as men. Recent recruits have come from racquetball, tennis and golf. Across the country, hockey rinks, tennis courts and even parking garages are being converted for use as pickleball courts.”

The JF Hurley YMCA is hosting the event with games on nine courts. Hurley YMCA Executive Director Richard Reinholz said, “Pickleball is certainly growing in demand. We now host games at the Y on five days a week and we are happy to be a part of this tournament. The YMCA is synonymous with community and certainly the Rotary projects will benefit those around us. The economic benefit to the area is significant with most of the players coming in from out of town.”

For most information on scheduled court times, contact the JF Hurley YMCA and Salisbury Parks and Recreation. Outdoor courts are being added at the Salisbury Civic Center in May.

Men’s and women’s doubles competition was completed on Saturday with Sunday set for mixed doubles. Play begins at 9 a.m. and will continue into the afternoon. Spectators are welcome and you just might find yourself wanting to pick up a paddle.