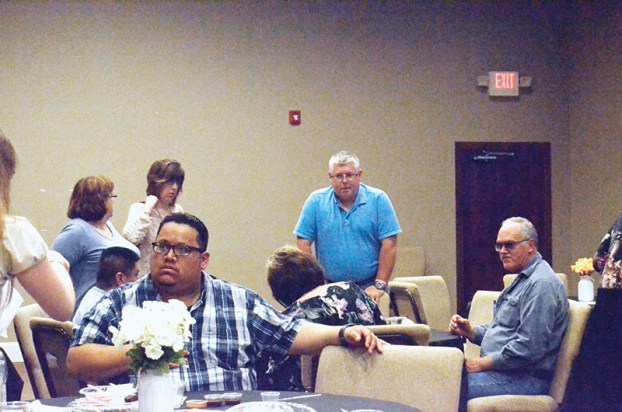 Behind the Shield banquet for law enforcement spouses, family

SALISBURY — Before Chris Schenk walks out of the house, he hears the same thing from his wife, Jennifer: “I love you. Be safe.”

Schenk is a veteran law enforcement officer with the Salisbury Police Department and the heartfelt words are something his wife never forgets to tell him. The couple had dinner Thursday night with other law enforcement officers, their spouses, families and the “village” of community supporters for the Behind the Shield banquet at Life Church.

The banquet was a way for the Salisbury church to thank not only law enforcement, but in particular their spouses and families for their support.

Life Church Pastor Chris Shelton said you can’t separate law enforcement from their families and the banquet was a way to appreciate the people who all too often are the most critical people in a law enforcement officers’ life.

He said they want the best for the community and its officers. Shelton said he feels as though sometimes people think if you are for the community then you can’t stand in support of law enforcement or vice versa.

Church Elder Michael Board has family members in law enforcement and said he understands what they go through, but they felt there was a big group missing and that was the spouses. Board came up with the idea to thank their families.

“It’s wonderful. It’s a really nice thing for them to do,” Jennifer Schenk said of the church.

Last year when five Dallas police officers were killed by a lone gunman, Jennifer said she was nervous and scared, but she still had to see her husband walk out the door.

She said it’s not as if her husband can just leave work, “the entire city depends on him.”

Schenk said as the spouse of a law enforcement officer, you have to learn to be independent and appreciate the time you do spend with them.

She said there are plenty of times when they celebrate holidays, birthdays or anniversaries on another day.

“We learn to appreciate when he is home,” Schenk said.

“You learn to appreciate the little things. You don’t get hung up on dates,” she said.

The couple’s friend of 15 years, Tracy Poblete and her husband, are also a support system for them. The couples have dinner together, attend barbecues and have gone on mini vacations together.

Poblete said she supports the Schenks by “loving them and being their friends.”

She said supporting them behind the badge is very much needed in today’s environment.

Poblete said law enforcement get very few thank yous and their families get even less.

“For me it’s important. A lot of people don’t understand what we go through,” she said.

McClanathan has advice for the families of law enforcement, which include staying away from social media sites that only seek to complain about a law enforcement spouse.

She said right now there is such a division in the nation, but that “we all bleed red and all are children of God.”

McClanathan spread the word about Frontline Families, a website that will be a network for law enforcement and their families to seek spiritual guidance and prayer from any list of chaplains, financial planning, health tips. The website would also be a place where children of officers who’ve died in the line of duty or whose parent maybe suffering from a debilitating disease can connect with other officers who can be a surrogate for that parent who is not able to be present.

Oftentimes spouses aren’t sure what’s going on and what their role is, she said.

“You may feel like you’re alone, but you are not. You provide a service that no one will ever see, but what you do is equally important. Don’t count yourself short,” Stillwell said.

Salisbury Mayor Karen Alexander briefly spoke of her appreciation for law enforcement and funds that have been earmarked by city council for public safety.

“You know you’re not alone,” she said.

Helms said those spouses and loved ones really are a big family.

Gardening season is in full swing and the phones, visits and programs have been non-stop. Last year, we had great... read more