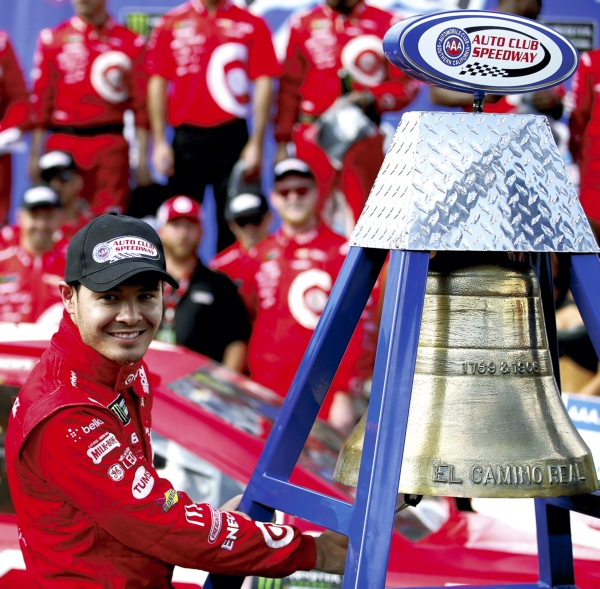 Second to none: Kyle Larson hangs on to win at Fontana

FONTANA, Calif. (AP) — A blistering first in qualifying. A surprising first in the Xfinity Series race.

And a steady, tenacious first when it really mattered on Sunday.

Kyle Larson was second to nobody in his home state.

“Lots of fun to be Kyle Larson right now,” Larson said with a grin. “Our race cars are really fast in Xfinity and Cup, so it’s a blast to show up to the race track every week.”

Larson finished second in each of the last three races, but the Sacramento-area native’s Chip Ganassi Racing Chevrolet was the class of the field at Auto Club Speedway all weekend long.

He claimed the second pole of his career Friday, and he also won the Xfinity race Saturday in a result that surprised him much more than his Cup triumph. The 24-year-old prodigy became just the fourth driver to sweep a race weekend at Fontana.

“Our cars are really good at every race track right now,” Larson said. “I feel like I have a shot to win every time I go to the race track. That’s always a lot of fun. That’s something I’ve always hoped for, to get to a point like that in my NASCAR career. In the past, I had race tracks where I knew I would be good, but right now, we’re going to some tracks that aren’t good for me and running up front. It’s a lot of fun to have that confidence.”

Fontana’s bumpy 2-mile track particularly suits Larson’s skills, and he was unshakable during the late drama and jockeying typical to the five-wide asphalt one hour east of Los Angeles.

After surging up from fourth to first with four new tires before the final caution, he made one last outstanding restart and cruised through two overtime laps to win.

“This is just amazing,” Larson said. “We have been so good all year long, three seconds in a row. I’ve been watching all the TV, like, ‘He doesn’t know how to win.’ But we knew how to win today, so that was good.”

Brad Keselowski was second, and Clint Bowyer came in third for his best finish since June 2015 and his first top-five finish in 52 races. Martin Truex Jr. was fourth after challenging Larson aggressively, and Joey Logano roared up to fifth.

Larson added to his other career victory, which came on NASCAR’s other 2-mile oval at Michigan.

After an early NASCAR season full of dominant cars getting stung at the finish, Larson wasted none of his advantage.

“He’s on a really nice roll, and it takes everything,” said Keselowski, who surged into second after two outstanding late restarts. “This is a sport of speed, execution and luck, and when you’re on a roll like that, you’ve got all three on your side.”

Ganassi credited the win to his young driver’s increasing maturity, along with his fast car, of course. Larson is a former Earnhardt Ganassi Racing development driver who landed with Chip Ganassi Racing in 2014, showing steady promise that built to this spectacular season to date.

Larson is only the second driver in Fontana history to win from the pole, joining six-time race champion Jimmie Johnson, who did it in 2008. Johnson finished 21st after starting near the back in his backup car.

Johnson, Keselowski and Phoenix winner Ryan Newman all sustained minor damage early on, but Larson was fast from the start.

Larson won the first stage of 60 laps, earning his first stage victory of the season, but lost his lead during a slow stop after getting too close to the wall on pit road. Truex won the second stage, but Larson slipped past him to reclaim the lead on the first lap of the final stage.

The leaders pitted under caution with 20 laps to go, but Truex had his first slow stop all day and slipped five spots down the field to seventh. Larson won the race off pit road and had a fine restart, but Matt Kenseth slid hard into the wall moments later after minor contact with Truex.

Kenseth failed to finish for the third time in five races this season.

After the restart with 12 laps to go, Larson flew past Kyle Busch and built a decent cushion — only to slow again when Cory LaJoie spun out. Larson pitted for tires along with most of the field, while only Hamlin, Truex and McMurray stayed out.

Larson barely got back into the lead before Ricky Stenhouse Jr. spun on contact from Roush Fenway Racing teammate Trevor Bayne to force the fourth caution, necessitating overtime. Larson had no problem hanging on.

Dale Earnhardt Jr. finished 16th in his landmark 600th NASCAR start, becoming just the 25th driver to hit the mark. He had to start from the back due to a tire change, and he never really threatened.

The three-race Western swing is over, and NASCAR heads home to Martinsville Speedway, moving from Fontana’s wide 2-mile oval to a half-mile bullring.