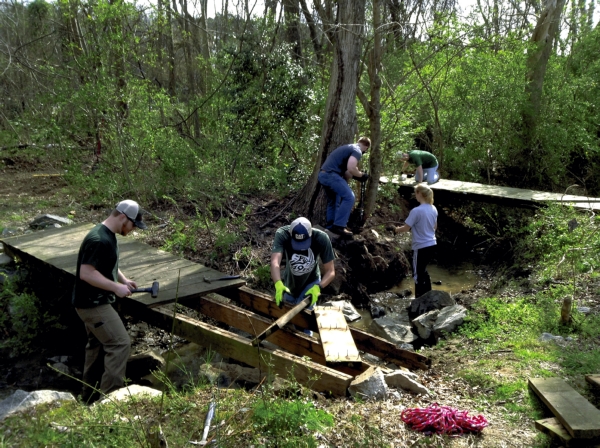 Engineering students from UNCC demolish an old bridge and construct a new one at Partners in Learning on the Catawba College campus Saturday. Photo by David Freeze

At the end of a beautiful spring Saturday, Partners in Learning on the Catawba College campus had a new pedestrian bridge, courtesy of a hard-working group of UNCC students. Four current College of Engineering students finalized a project they began planning in January that included the demolition of an old, existing bridge and brush removal along the adjoining section of the creek.

After acceptance into the Leadership Academy, future engineers are divided into groups that have similar interests for community projects. Christopher Ramsburg, a senior originally from Westminister, Md., said the five students had earlier completed a project for the Rowan-Salisbury School System when they demolished the former cosmetology center.

“Both projects were for non-profit agencies and at no cost to them,” Ramsburg said. “We donate the labor and partner with Lowe’s for the materials. Four other project teams are also out doing things too and the program has been in place for 14 years.”

The Leadership Academy students are together for two years that begin with various training and team building during retreats. The team chose the bridge project because the existing structure was in poor repair and twisted so that footing was unsure, particularly in wet weather. Ramsburg said, “We wanted to make a strong foundation for the new bridge and secure it well on both sides of the creek. By replicating the existing bridge, we knew we had a proven design. Our group will haul off the old material and also clear the nearby vegetation from the banks. Our goal is safety for all concerned once the bridge is complete.”

Ramsburg hopes to remain in North Carolina after graduation as he debates a job offer in Gastonia.

Others in the group included junior Jacob Peeler of Shelby, senior Jordan Parker of Wilmington, junior Darren Basso from Salisbury and graduate Ben Lackey of Hickory, who was just helping out for the day.

Basso used his Salisbury and Rowan County connections to get suggestions for projects from Captain Melonie Thompson from the Salisbury Police Department and Jackie Harris of the Rowan County United Way. Basso eventually talked to PIL Executive Director Norma Honeycutt, never at a shortage for projects. The needed bridge repair was the result of their discussion.

Parker, set to graduate in December and the only female in the group, said the students were developing their leadership and management skills but also offered reasons why the PIL project was a good fit.

“We wanted something physical and long lasting, and we all love being outside,” she said. “This type of work gives us a break from studying and lets us do something for others. We have pictures before and after and look forward to the kids here getting to play in the creek and the woods. People often shelter their kids too much and in this environment, they don’t need to.”

Impressed by his dad’s bridge-building skills, Darren Basso said, “I always wanted to become an engineer. At 5 to 6 years old, I fell in love with all the big equipment at one of dad’s projects. Our group started scheduling the two Salisbury projects in January and enjoy doing hands-on and outdoor projects although the cosmetology (center) work included taking out walls, pulling up carpet and taking apart shelving. We are passionate about our work and push ourselves to do the best job we can.”

Basso hopes to enter the US Navy in the civil engineer program and go on to officer candidate school. Once his time in service is complete, Basso plans to follow in his dad’s footsteps, adding, “The apple doesn’t fall far from the tree.”

Partners in Learning Director at Catawba Deborah Howell was ecstatic when she saw the finished bridge and surrounding area. She said, “It looks so much better than it did before. The new bridge also offers the perfect place for the kids to get in the creek. We had lots of rubber boots donated a couple of years back and they are going to get plenty of use now. I can’t wait to tell the teachers on Monday to start getting in the creek. And the parents might as well get ready too. If the kids don’t come home a little dirty, they didn’t have enough fun!”