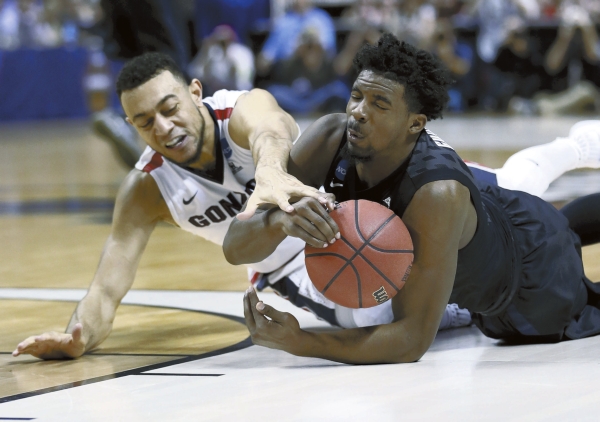 SAN JOSE, Calif. (AP) — The criticism dogged Gonzaga wherever it went, no matter how much it won.

The Zags run up their record by beating up on teams in a weak conference, then always seemed to come up short as the calendar went deep into March. Few outside of Spokane believed the program Mark Few helped build from scratch belonged in the national powerhouse conversation.

Overrated no more, Gonzaga is finally headed to the Final Four.

The Zags took the pressure of history head on with a performance worthy of their No. 1 seed, rolling to a dominating 83-59 win over Xavier in the West Region final on Saturday that should silence those critics.

“Just an incredible feeling of elation and satisfaction,” Few said. “It’s been a long, hard journey to get this program here.”

Few and the Zags have won the West Coast Conference Tournament 16 times, been regulars in the NCAA Tournament since 1999, reached the Sweet 16 eight times.

The Final Four was the only missing piece to their resume.

The Zags (36-1) claimed their spot in Arizona and history with a superb all-around game, showing off their usual offensive efficiency while flexing the smothering type of defense that had previously been the chink in their armor.

Gonzaga made 12 of 24 shots from 3-point range after struggling the first three NCAA Tournament games. The Zags were No. 1 in defensive efficiency during the regular season and shut down the underdog and 11th-seeded Musketeers (24-14) to become the first WCC team to reach the Final Four in 60 years.

Nigel Williams-Goss scored 23 points while orchestrating Gonzaga’s efficient offense after struggling against West Virginia. Johnathan Williams added 19 points and center Przemek Karnowski, who was still recovering from back surgery a year ago, created open perimeter looks with his deft passing out of the post.

Now the Zags are headed to the desert, where they’ll play the winner between South Carolina and Florida in next week’s Final Four.

“The Final Four doesn’t validate or discredit a season. It’s not an end-all, be-all,” Williams said. “Gonzaga has been a great program and we’re just happy to keep carrying the torch.”

The Musketeers brought their turn-the-page jar of ashes to the NCAA Tournament, where they burned through a string of upsets to reach their third Elite Eight and first since 2008.

Their bid for the program’s first Final Four ran into a buzz saw.

Xavier played well offensively early to hang with the Zags, giving super fan Bill Murray and the rest of their supporters a glimmer of hope. Once Gonzaga got rolling, the Musketeers had no answer.

The Zags struggled to find an offensive rhythm against West Virginia in the regional semifinals— who doesn’t? — but had it flowing against Xavier.

After hitting 29 percent of its 3-point shots its first three NCAA games, Gonzaga found the range against Xavier, hitting 8 of 13 from the arc in the first half, mostly against the Musketeers’ zone or on kick-outs from Karnowski .

Xavier had a good offensive start, only to hit a dry spell as Gonzaga stretched to lead to 49-39 by halftime.

Halftime did little to slow the Zags, who pushed the lead to 59-42 on 3-pointers by Williams-Goss and Jordan Mathews. Gonzaga kept the machine rolling in the second half, continuing to make shots while its defense prevented the Musketeers from making any kind of run.

“They were just locked in,” said Xavier’s Trevon Bluiett, who had 10 points. “They were a discipline type of team and we just didn’t execute well enough.”

Xavier should have a good foundation next season from its Elite Eight, losing only senior guard Malcolm Bernard from its starting lineup.

Gonzaga played like a No. 1 seed and can erase all those overrated calls now that it is finally in the Final Four.

Gonzaga is the first WCC team since San Francisco in 1957 to reach the Final Four and first from the West since UCLA did it three straight years from 2006-08.

The first half ended with a strange sequence that started with Gonzaga accidentally knocking the ball into its own basket while fighting for a rebound. RaShid Gaston was credited with the basket after the ball bounced off the floor and the backboard into the basket.

Williams-Goss then hit a floater in the lane and J.P. Macura followed with an 80-foot shot that banked in, but was ruled too late after an officials’ review.

Gonzaga faces the winner between South Carolina and Florida in the Final Four next Saturday.