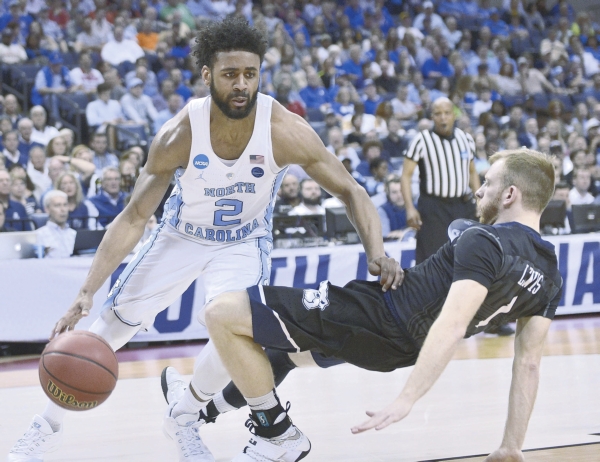 Jackson, Berry lead UNC past Butler and into Elite Eight Berry scored 26 points, Jackson had 24, but it was the first career double-double from Maye – 16 points and 12 rebounds – that helped set the tone early and send the top-seeded Tar Heels to a 92-80 victory over Butler in the NCAA Tournament on Friday night.

Carolina, which reached the Elite Eight for the 27th time, will face the winner of Friday’s second South Regional between UCLA and Kentucky.

Maye’s early jolt off the bench helped Carolina (30-7) build a first-half lead to as many as 20 as the Tar Heels benefitted from accuracy, connecting on 54.4 percent of their shots while Butler was at 43.5 percent.

Andrew Chrabascz led the fourth-seeded Bulldogs (25-9) with 21 points and seven rebounds, while Kelan Martin finished with 16 points for Butler, which struggled shooting early and did not recover.

“We let them get into a rhythm, especially in the beginning,” Chrabascz said. “When you let a team like that feel good about themselves, it’s tough to get them out of that with how many talented guys they have on their team. And also they answered every run that we had.”

The Tar Heels broke out of the gate early, building a double-digit lead and really weren’t threatened after halftime, although Butler did get within 10 at one point. Carolina, which let Arkansas claw back before defeating the Razorbacks 72-65 last weekend, weren’t going to let that happen again.

“We got by with very little room against Arkansas,” Jackson said. “We knew it was a game of runs. Butler is a good team, and they keep on coming at you. For us, we tried to stay focused and stay poised.”

North Carolina used early accurate shooting to build a 16-point lead as the Tar Heels connected on 13 of their first 18 shots, including missing only one of seven from outside the arc.

While Butler managed to whittle the deficit to single digits on a couple of occasions before halftime, North Carolina would simply answer with another rally, helping the Tar Heels carry a 52-36 lead into the break.

The Tar Heels lead would stretch the lead back to 20 near the 12-minute mark of the second half, but Butler didn’t exactly allow North Carolina to coast home.

A 13-4 Bulldog run made a dent in the advantage as Martin had seven in the stretch with Avery Woodson connecting on a 3-pointer. Martin closed out the run with another 3-pointer to pull Butler within 71-60.

But while the Bulldogs would cut the Carolina advantage to 10 points 2 minutes later, they would get no closer the rest of the way.

Butler: The Bulldogs had not trailed in the tournament until Carolina’s Isaiah Hicks scored the game’s opening basket. The two previous times Butler defeated a No. 1 seed, the Bulldogs went all the way to the national championship game.

North Carolina: The Tar Heels have reached the Elite Eight 27 times, including eight times since 2000. Maye’s 16 points were a career-high. “I got a couple of shots to fall in and felt pretty confident they kept going in,” Maye said.

JENKINS ATTENDS: Kris Jenkins, who made the 3-pointer to defeat the Tar Heels in last year’s national championship game, was seated near the Carolina bench. Jenkins was cheering on his brother, senior guard Nate Britt. “Me, him and Nate are in a group chat together. We always laugh and stuff. He’s pretty close to most of us. I mean, he’s here supporting his brother, and we’re kind of like his brothers, too,” forward Kennedy Meeks said.

PENCE CANCELS: Vice President Mike Pence, who once was expected to attend Friday’s game, cancelled Friday because of the action in Washington surrounding health care. Pence has ties to Butler, not only as the former governor of Indianapolis, but also because his wife, Karen, attended the school.

UP NEXT: North Carolina plays the winner of the region’s second game on Friday between No. 2 seed Kentucky and the third-seed UCLA.

By David Shaw sports@salisburypost.com MOUNT ULLA — All of a sudden, West Rowan is a baseball team with the wind... read more