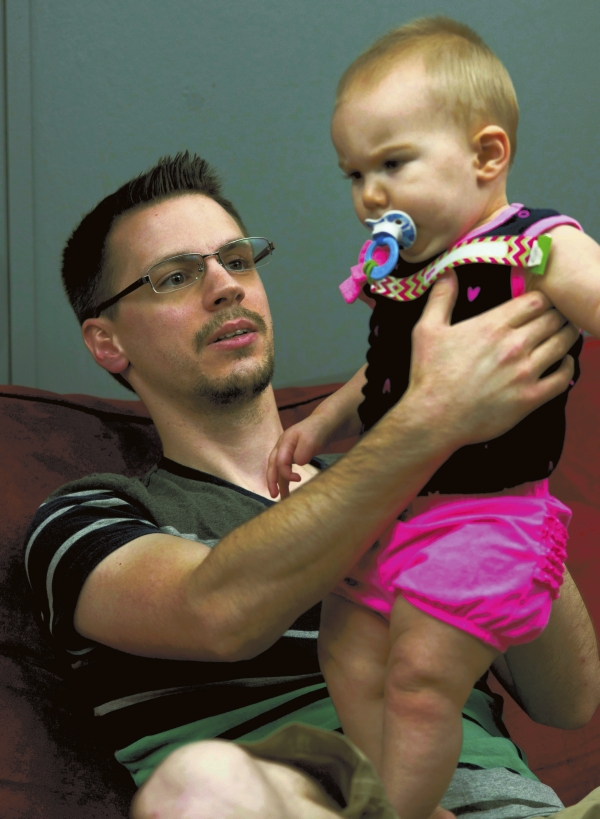 Kevin Blackburn picks up his 9-month-old daughter Aria. Kevin and Krista Blackburn have been making frequent trips to Philadelphia for cancer treatments for their 9-month-old daughter Aria. At 22-days-old, doctors found evidence of tumors on the back of Aria's eye. Retinoblastoma is a rare malignant tumor of the retina affecting young children. Jon C. Lakey/Salisbury Post

CONCORD — Proceeds from an April 1 “Walk for Childhood Cancer” will benefit Aria Blackburn, a 15-month-old girl from Kannapolis who has retinoblastoma, which causes tumors to grow in the retinas of her eyes.

Aria and her family were featured in a Salisbury Post article in August. Aria is a third-generation member of her family fighting the eye cancer.

Her parents are Krista and Kevin Blackburn. Kevin also dealt with retinoblastoma as a child, as did his late father, Chris. Kevin lost his left eye because of the disease when he was only weeks old.

Aria was diagnosed with retinoblastoma when she was 4 weeks old. She has had 11 tumors so far, but none has yet threatened the optic nerve, which could cost her her sight. Aria has undergone numerous rounds of chemotherapy, laser therapy and cyrotherapy, in which the tumors are frozen.

The treatments at Willis Eye Hospital in Philadelphia are aimed at calcifying the tumors. To date, Aria has been responding to the treatments.

Until Aria’s retinas are fully developed, which usually happens at 5 years old, she likely will continue to develop tumors that need to be treated. Since the Post story last summer, Aria has developed two additional tumors.

Aria and her mother, and sometimes her father and other family members, have to travel to Philadelphia every four weeks for an examination under anesthesia and for whatever treatment is necessary.

The Blackburns’ out-of-pocket medical and travel expenses have continued to grow. The fundraising goal of the April 1 walk is $25,000.

Otherwise, the family depends on health insurance that Kevin has through his IT job at Food Lion headquarters in Salisbury. Children’s Flight of Hope in Mooresville has provided two plane tickets for each Philadelphia trip, and Crossroads Church members have helped with babysitting, groceries, offerings, extra plane tickets and clothing.

In Philadelphia, the family stays at a Ronald McDonald House when possible but in hotels at other times. Krista had to give up her job at Cabarrus Women’s Center to help with her daughter’s care.

The couple also have a son, Isaiah.

The April 1 walk will be in the Laurel Park neighborhood of Concord. The check-in and postwalk activities will be at Crossroads Church, 220 George W. Liles Parkway. Check-in and same-day registration starts at 10 a.m.; the walk starts at 11 a.m.

Registration includes one T-shirt per person, as long as supplies last. Extra shirts are $15 each.

There also will be live music, a silent auction, a bounce house, face painting, food and other vendors.

The fundraiser is organized and conducted by Team Player Inc.

“Our mission at Team Player is to spread the power of teamwork by helping families and organizations in need,” part owner Scott Wauters said. “We organize events to help raise money for whatever they need it for.

“Our message to families, schools, churches, communities and corporations is ‘WeB4Me,’ because everyone wins when We comes B4 Me.”

To register for the walk or make a donation before April 1, go to www.teamplayerinc.org. For more information, contact Wauters at wauters@ctc.net.