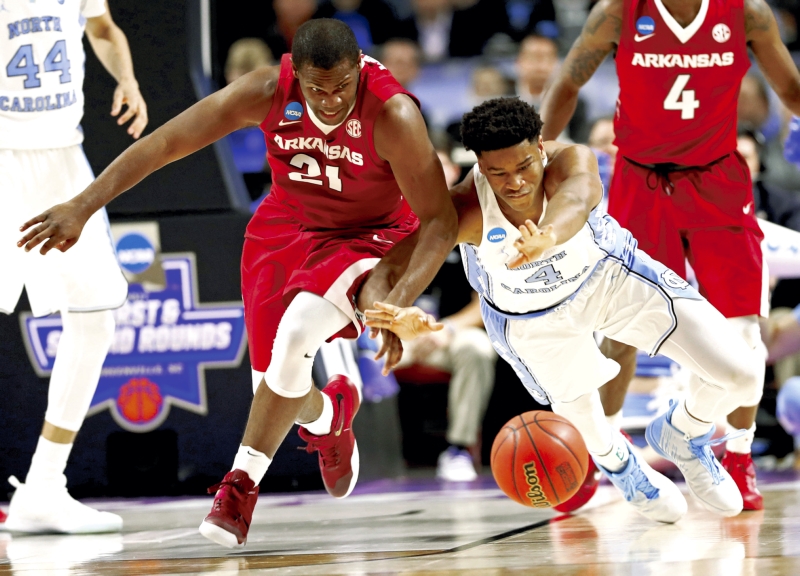 GREENVILLE, S.C. (AP) — North Carolina’s players talked all year about their run to last year’s NCAA championship game — that, as painful as the loss was, it prepared them for another Final Four push.

On Sunday, down to a handful of possessions with their season suddenly in peril, the Tar Heels’ experience saved them from a stunningly early exit.

Kennedy Meeks had 16 points and a huge tip-in with 44.2 seconds left, helping top-seeded UNC barely avoid a huge upset by rallying late to beat Arkansas 72-65 in the second round of the NCAA Tournament’s South Region.

“I don’t mind saying I feel a little lucky,” UNC coach Roy Williams said. “Every now and then, I knock in a long putt, too.”

The team with three returnees who were on the court for Villanova’s title-winning 3-pointer at the buzzer last year had enough composure to shake off everything on a day rapidly going wrong.

Even a 65-60 deficit in the final 3 minutes, which threatened to turn the game into the kind of March Madness moment that had befallen the fellow 1-seed Wildcats only a day earlier.

Instead UNC closed on a 12-0 run to give Williams his 18th trip to the Sweet 16 dating to his time at Kansas.

“We could’ve easily laid down those 3 or 4 minutes and gave in,” junior point guard Joel Berry II said, “but like I said, we’ve got dreams and goals we want to reach. And we just didn’t want to go home.”

Justin Jackson added 15 points for the Tar Heels (29-7), including the win-capping dunk off a turnover with 3.5 seconds left. Senior Isaiah Hicks came up big late, too, with a dunk and four free throws in the final 2 minutes after being a no-show much of the way.

Daryl Macon scored 19 points before battling leg cramps for the eighth-seeded Razorbacks (26-10), who did just about everything right in the second half — except close out the Tar Heels.

“We came to dance and we didn’t come to do the one-step,” Arkansas coach Mike Anderson said. “We wanted to bust up some brackets here today.”

The Razorbacks had UNC wobbling with their aggressive, mistake-forcing defense harassing the Tar Heels all over the court. And when Jaylen Barford scored in transition off a turnover, Arkansas led 65-60 with 3:28 left.

But the Tar Heels responded in a huge way.

Arkansas: Anderson said the Razorbacks wouldn’t change what they do against the go-go-go Tar Heels. His team rallied from 30-13 down to take its first lead midway through the second half behind a “40 Minutes of Hell” familiar edge from the Nolan Richardson era. In the end, though, Arkansas fell to 0-9 against No. 1 seeds in the NCAAs and couldn’t reach the Sweet 16 for the first time since 1996.

“They’re a great team,” guard Manuale Watkins said. “And their backs were against the wall. They made the plays to win the game. They’re a 1-seed. They showed it.”

UNC: How did experience help? After Barford’s layup, the Tar Heels scored on six of their final seven possessions while the Razorbacks came up empty on their last seven.

“We know not to panic,” Berry said. “Coach always tells us, ‘Keep playing, keep playing, play better.’ That experience came into play. There were plays that we called, we executed them and that’s what you’ve got to do.”

With the shot clock winding down, Berry drove and collided with Adrio Bailey. There was no whistle — no charge, no blocking foul, no travel — so Berry just flung the ball onto the backboard.

That’s when Meeks came through with his big tip-in. Meeks got inside position on Moses Kingsley to tap the ball with his left hand, sending it off the backboard and in for the 68-65 lead.

“I did what Coach always said: that’s get in front of the defender when the shot goes up, and it fell on my hands,” Meeks said. “We do tip drills all the time in practice, so it was something I was used to.”

While the Tar Heels took over late, Arkansas squandered its chances to reclaim momentum. Most notably, Kingsley missed two free throws with 25.2 seconds left while Anton Beard followed with a missed 3-pointer for the tie.

Hicks hit two free throws with 10 seconds left to all but seal it.

“They made some big plays, and a couple of shots went their way,” Beard said. “That’s just how it goes in March Madness.”

North Carolina advanced to the Sweet 16 to play fourth-seeded Butler on Friday in Memphis, Tennessee.