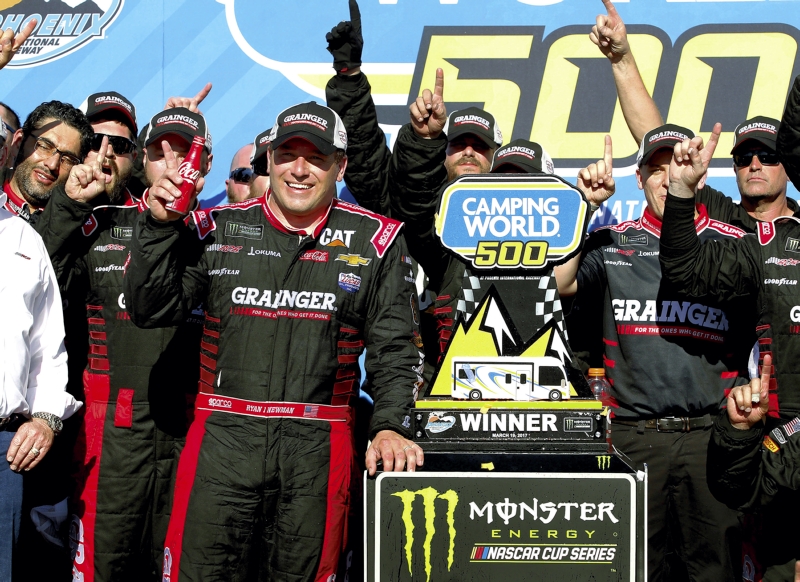 AVONDALE, Ariz. (AP) — Ryan Newman gambled and skipped a tire-changing pit stop to move from seventh place to the lead and held on for the final two laps for a surprise victory in Sunday’s Monster Energy NASCAR Cup series race.

The 39-year-old Newman, who broke a 127-race winless streak, held off Kyle Larson, the second-place finisher for the third straight race.

Kyle Busch, the leader for nearly all of the final stage of the race, was third on a day when the temperature soared to 97 degrees at Phoenix International Raceway.

Like nearly all the rest of the field, Larson and Busch went to the pits on the late caution caused when Joey Logano’s car blew a right tire and slammed into the wall six laps from the finish.

Newman, in his first win since the 2013 Brickyard 400, gave Chevrolet its first victory of the season and ended a 112-race losing streak for Richard Childress Racing.

Once again, Logano’s misfortune foiled Busch. Last week Logano’s car knocked Busch’s into the wall on the final stretch in Las Vegas. That led Busch to storm down pit row and throw a punch at Logano, creating a scuffle with the crews and a meeting for the drivers with NASCAR officials on Friday.

Busch took the lead with a quick pit stop during a caution flag and led for 113 laps before heading to the pits after Logano’s crash.

The series of runner-up finishes gave Larson the Cup points lead, the first time Chip Ganassi Racing has led the points race this late in the season since 2002.

Elliott dominated the second stage but lost the lead after Matt Kenseth, like Logano, blew a right front tire and slammed into the wall on the 193rd lap of the 314-lap race. In the ensuing pit stop, Busch got out quicker than Elliott to take the lead.

Blown tires were a common site on the hot pavement.

Logano started on the pole and won on the same track in the next-to-last race of last season. He was in third place coming out of the pits during a caution flag between the second and third series but was penalized for speeding on pit row.

The held him back a lap and he had climbed his way through about half of the field before the tire blew.

A week ago, Busch was penalized for pit row speeding.

The Cup’s “NASCAR Goes West” tour heads to Fontana, Calif., next Sunday for the finale of its three-race spring trip to the West.