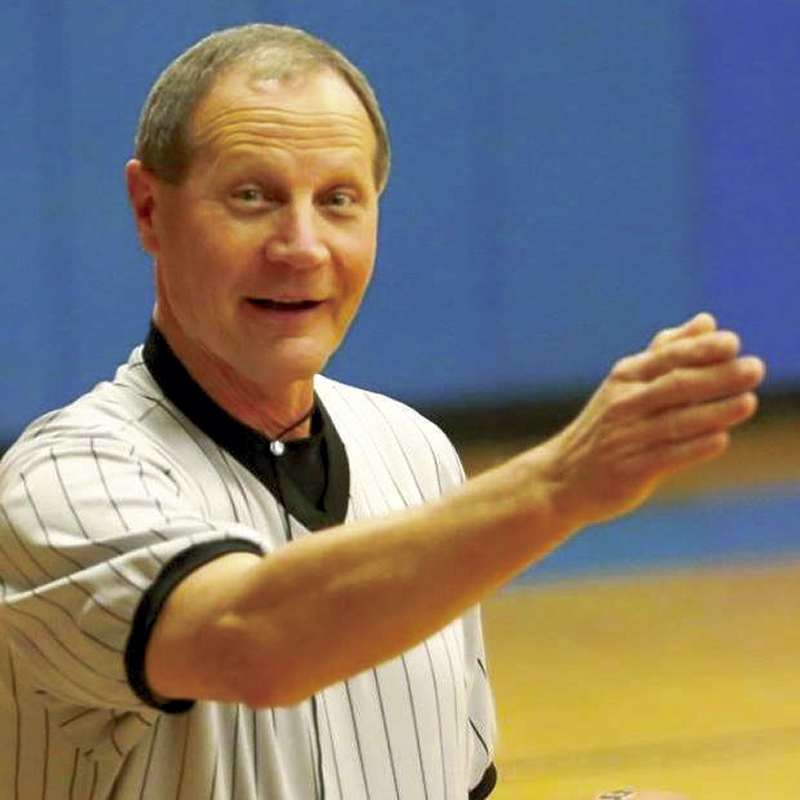 Facebook photo Gary Cress, a former great student athlete at South Rowan High School and Morehead State University, has been a sports official for many years.

They may not know his name, but they know him. He’s a familiar face, a familiar voice. He’s usually smiling, like there’s no place on earth he’d rather be than in your gym. Some officials look like they dread the screaming and ill will that’s about to come their way, but Cress stopped being concerned about the yelling decades ago. Part of the game. No big deal.

Cress is quite tall, 6-foot-3, hinting that he may have played some ball himself back in the day. He did. There were nights he scored 30 points in college basketball games. There were nights when it looked like he might have the bat to make the major leagues.

Cress is older than people think. He graduated from South Rowan High way back in 1967, 50 years ago. That means he’s well into his 60s now, although he’s trim enough and still runs the court well enough that he could pass for a guy in his 50s. He competed in the sprints — 100, 220 and the 440 relay in his college days. Those wheels are still with him.

“I have been around for a while, 45 or 46 years as a basketball official, so when I walk into a gym someone always yells, ‘Oh gosh, I thought that guy had retired,'” Cress said. “I kind of enjoy that.”

Actually, most fans don’t mind seeing Cress stride in, especially if his partners are youngsters. Cress is old-school. He’s not looking to throw around technicals, not looking to put on a show, but he is there to control the game and to make sure both teams get a fair shake. He reintroduces himself to the coaches.  They all know him. He says hello to the folks handling the P.A., the clock and the scorebooks. For about three hours, they’re going to be his partners, too.

In his days at South Rowan High, Cress stood out as a baseball pitcher and outfielder as well as a scrappy forward on the basketball team. He had 10 straight double-figure games to open the 1966-67 basketball season. On a good team that finished fourth in the South Piedmont Conference, he was the No. 2 scorer behind Franklin Rhyne, averaging 11.9 points per game. In a loss to a strong Statesville team, Cress accounted for 20 of South’s 36 points.

In the summer of 1967, Cress was the starting catcher for the Rowan County American Legion team. Coach Joe Ferebee needed a catcher more than another hurler, so he taught Cress how to handle  a pitching staff. He was a .250 hitter, but he hit in the clutch and helped a pitching staff that included arms such as Fred Cooke, Melvin Brinkley and young lefty Randy Benson.

That was a good Rowan team. It knocked Charlotte Post 9 out of the playoffs before losing to Paw Creek.

Cress wasn’t sure abut his future, but he got a chance to play college basketball through recommendation of a former teammate, Ben Basinger, and he took it. Basinger had graduated from South Rowan a year ahead of Cress. Basinger was doing well on the court, grabbing a lot of rebounds for a new program — UNC Charlotte.

“Coach Harvey Murphy had asked Ben if he knew of anyone else who could play and he told him about me,” Cress said. “I played a year for the 49ers in the Mine Shaft.”

UNC Charlotte played at the NAIA level in those days as a member of the Dixie Intercollegiate Conference. Cress averaged 12.9 points and 5.1 rebounds as a freshman in 1967-68. He poured in 32 points against Belmont Abbey. He had 26 in an 87-84 victory against UNC Greensboro.

Despite his basketball success, Cress had come to the realization that if he had a chance to play past college it was going to be in baseball.

“I was 6-3, playing against guys 6-5 and 6-6,” Cress said. “I did OK in basketball because I hustled and I got garbage buckets, but baseball is where I had a real chance.”

His next career move was an unusual one. He left Charlotte to enroll at a junior college. The reason was baseball. Charlotte didn’t have a baseball team yet, but at Gaston College, he could continue his education and play both sports.

His most memorable game and his best game at Gaston came when the Gaston Rebels took on a national power, the Gardner-Webb Runnin’ Bulldogs. G-W was led by the 7-foot-2 Gilmore, who would take Jacksonville to the national championship game against UCLA a few years later. Gaston lost despite scoring over 100 points. Cress scored 30 that night.

“I think four or five of my buckets were goal-tended by Gilmore,” Cress said with a laugh. “You could sort of see he was going to make a lot of money.”

Cress also had baseball success at Gaston. Ferebee, who had kept track of him, was eager for Cress to join his program at Pfeiffer.

But a baseball tryout camp changed the course of Cress’ life. A Pittsburgh Pirates scout saw Cress there and recommended him to a friend, Sonny Allen, who was the baseball coach at Morehead State.

Allen had never seen Cress in person, but on that trusted scout’s endorsement, he offered Cress a full scholarship.

Morehead State is in rural Kentucky, the foothills of the Daniel Boone National Forest. Oddly enough, it’s in Rowan County, although they pronounce Rowan differently there— like Ro-un.

“I’m driving to Morehead, and the first thing I see there is a sign that says ‘Entering Rowan County,’ ” Cress said. “Maybe it was an omen that things were going to work out. It was a beautiful place.”

To his delight, Cress found Allen was like a clone of Ferebee.

“They were like two peas in a pod, and I was lucky to be coached by men like that,” Cress said. “They made sure you did things the right way. If you didn’t, you sat.”

Cress didn’t do much sitting. He had a tremendous season for Morehead State baseball in the spring of 1970. Playing third base, he batted .438 and made the All-Ohio Valley Conference team. That .438 mark is still one of the top five batting averages in school history.

Cress’ most vivid memory is a game against Ohio University and the Bobcats’ hard-hitting shortstop, Mike Schmidt. This was Schmidt before the mustache and all the muscles and before he moved to third base for the Philadelphia Phillies, but he could hit.

“I’m playing third base, three feet off the line, and Schmidt hit a rocket between me and the bag,” Cress said. “I never saw the ball until it was in left field. If he’d hit it at right me it might’ve killed me. You could tell he was going places.”

Cress graduated from Morehead State in 1972. His last fling with pro baseball was a Cincinnati Reds tryout camp.

“I was invited to a tryout camp at Riverfront Stadium,” Cress said. “I ran a fast 60-yard dash time, but my shoulder was shot by then. Still, it was an opportunity that not everyone gets, and I’ve always been grateful for it. I was just a blue-collar athlete, but I felt like I held my own against some great players.”

Cress got a master’s degree and returned to the Rowan County in North Carolina. He taught and coached for six years before moving into the insurance business.

Cress is divorced. He had three children, but he lost a son, Matt, a UNC graduate, to cancer in 2006.

His son, Adam, and daughter, Abby, have moved to different states, but they’re doing fine.

Abby got some of her father’s basketball genes. She was a 1,000-point scorer for the South Rowan girls in the late 1990s.

Reid Bradshaw, the former South Rowan coach and athletic director, is the one who gave Cress his first officiating assignment at a middle school game. Blowing whistles has been a big part of his life since the 1970s.

Cress likes to work at least three games a week. When the local basketball season ended — he handled the boys seventh-grade championship game last week — he simply moves on to softball. Then, every fall, he refs volleyball matches, as he awaits another hoops season.

You get yelled at a lot less in volleyball.

“I’ve been working with the same booking folks — the Triad Basketball Officials Association — for 31 years,” Cress said with a smile. “So I guess I’ve been getting some calls right.”

Fifty years ago it was March Madness for ASU,…