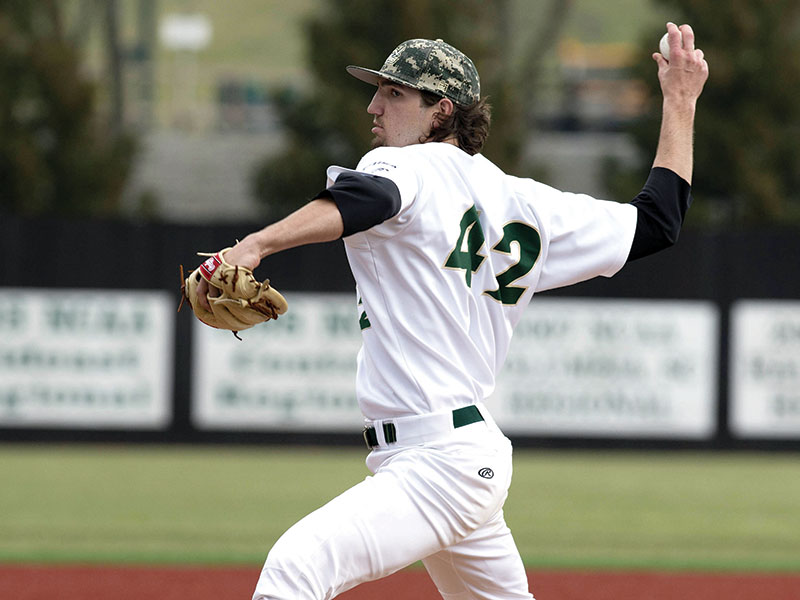 CHARLOTTE — Colton Laws hasn’t given up a run — earned or unearned — in his last two starts for the Charlotte 49ers, and he didn’t allow a run in his last six innings in the outing before that.

So that’s a string of 20 1/3 scoreless innings that the 6-foot-8, 223-pound Laws will take with him to the mound in Miami this Friday when Charlotte takes on Florida International University (9-7).

Laws, who graduated from Carson High in 2014, knows he’ll pitch Friday unless he sprains an ankle or comes down with the flu. He’s established himself as the Friday guy for Charlotte (10-6). His four outings in 2017 have been Friday starts against West Virginia, Rider, Xavier and East Carolina. Fridays are special. That’s when the aces, tall young men firing gas, take the hill.

“It was a great feeling to pitch the opener against West Virginia and it’s a great feeling to realize I’m looked at as an ace and the coaches have confidence in me,” Laws said. “But the toughest thing about pitching on Friday is you’re always up against someone else’s ace.”

That’s why Laws is only 1-0 despite four straight sharp starts. It’s been hard for the 49ers to provide run support. Laws got a no-decision last Friday despite manhandling eighth-ranked East Carolina’s potent lineup for nine strikeouts in seven innings. Charlotte finally pulled it out with two runs in the ninth.

In his last three starts, Laws, who graduated from Carson High in 2014, has struck out 23 and walked two. He figures he’s made two bad pitches. Pitchers remember their mistakes in Division I baseball because just about every serious lapse in execution gets hit a long way.

“I’m a little bigger, I’m throwing harder, and my changeup and breaking pitch have improved, but the biggest difference between me now and the pitcher I was in high school is focus,” Laws said. “You have to concentrate on every pitch. You can’t relax against college hitters. If you do, you’ll get hurt.”

Laws would like to take back two “mis-located” fastballs if he could. All four runs scored against him this season came on two swings.

In the game with West Virginia, Laws allowed a two-out bunt single in the fifth. That frustration caused a temporary lapse in focus. His first pitch to the next guy left the ballpark. That’s when a 2-0 lead and a probable victory turned into a 2-2 tie and an eventual no-decision. Charlotte won 6-3.

Against Rider, Laws hadn’t settled in yet when he gave up a two-out, two-run double to the left-center gap on a first-inning fastball that wandered toward the heart of the plate. He was lights-out after that, and the 49ers came back to win, 4-2.

Then Laws fired seven shutout innings to beat Xavier before he held East Carolina to just two hits in seven innings. His ERA entering Friday’s start will be 1.32.

The rangy right-hander said he usually throws his fastball in the 90-92 mph range, although an occasional pitch might be clocked at 93 or even 94.  What makes him so difficult to hit is the movement he has on the ball and the downward angle created by his height. When a 6-foot-8 man strides downhill off the mound, it tends to make hitters very uncomfortable.

Laws complements his fastball with a slider and a changeup. The changeup has become a vital pitch. It looks the same as his fastball coming out of his hand, but there’s about a 10 mph difference.

“The best game I pitched all last season was at Rice,” Laws said. “I threw seven shutout innings and only threw two breaking balls. I located the fastball and mixed in enough changeups to keep them off-balance.”

Laws is a sophomore as far as college eligibility. Ordinarily, college sophomores at four-year schools aren’t eligible for the June draft, but Laws turned 21 in November. His age makes him fair game to be selected by a MLB team. It definitely could happen.

“I’ve talked to quite a few scouts and there have been eight or 10 of them there for most of my starts,” Laws said. “I’ve also filled out questionnaires from a lot of teams.”

Laws was a fine player at Carson, a two-way guy who also did a nice job at first base. In three varsity seasons from 2012-14, he went 13-4 on the mound while driving in 35 runs.

The most imposing numbers he put up at Carson actually were on the basketball court, where he scored 1,261 points. He still ranks third in Carson history.

Laws pitched outstanding games for the South Charlotte Panthers in showcase baseball and had a number of college offers. He signed in the fall of his senior year with East Carolina.

His stay at ECU, when school began in the fall of 2014, was brief. Homesickness was part of it, but not all of it.

“It just wasn’t what I expected,” Laws said. “There had been some changes with the coaching staff. Things just didn’t click for me, but no regrets. It’s all worked out for the best.”

He was working out on his own for a few months after things didn’t go well at East Carolina.

Then he enrolled at Charlotte, a lot closer to his hometown of Faith.

His comeback officially began in the summer of 2015 when he took the mound for the Concord Weavers, a wood bat team in the Southern Collegiate Baseball League. Charlotte coaches saw enough of him there to know he could be an important part of their team moving forward.

A sprained left wrist put Laws behind when Charlotte’s 2016 season started. He worked out of the bullpen for a while for head coach Loren Hibbs, but by mid-March he had become part of the three-man weekend rotation. He wasn’t the Friday guy, but he was a Saturday guy.

Laws’ 4-3 record included two brilliant starts. There were seven shutout innings against Fairfield in March. There also was that breakout game at Rice when he mowed down the 12th-ranked Owls in late April. Topping off Laws’ comeback, he was solid in the classroom. He was named to the Conference USA’s Commissioner’s Honor Roll.

Doty has a lot of credibility. He worked with Detroit Tigers all-star Justin Verlander at Old Dominion University.

“Every coach has a different philosophy, his own way of doing things,” Laws said. “But everyone has bought in.”

By the time this season began, Laws had earned his spurs as the ace.

“I just try to bring energy to every start,” Laws said. “I like to compete and this is a great environment to compete in. It’s fun. We’ve got a solid team.”

While he didn’t get the win personally, Laws had a satisfying performance at East Carolina last Friday, and his future is bright. He’s either going to be drafted and get paid to play baseball or he’s going to develop into a college star. If he has to make a choice in June, it’s going to be a win-win situation.

The only time Laws hasn’t been on top of the world lately came when he visited Halton Arena to watch the 49ers play basketball.

“I miss basketball so much that it’s hard for me to watch it,” Laws said. “I had to keep turning my head away.”