Dulkoski leads The Revival at the Crescent 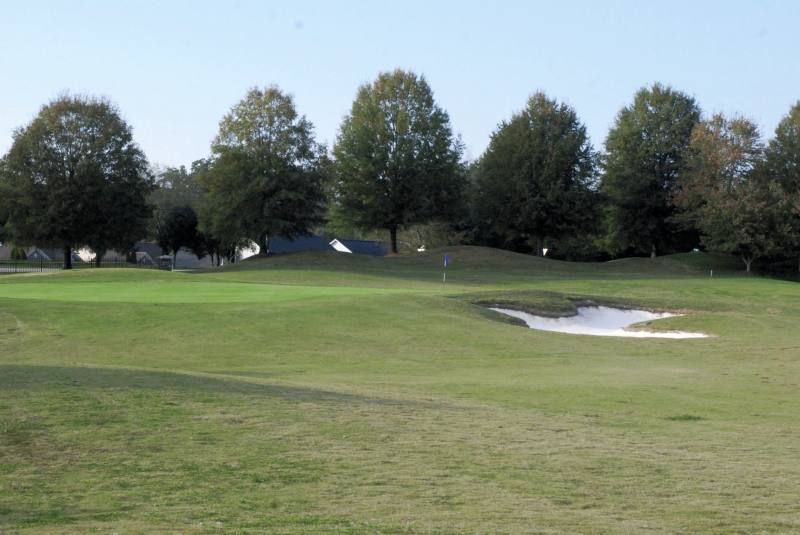 Dennis Davidson/Salisbury Post The 10th green at The Revival at the Crescent Golf Club. All 32 sand traps on the course have gotten needed attention from the new ownership.

SALISBURY — Not many people have enjoyed the unseasonably warm winter as much as Derron Dulkoski.

The new owner of The Revival at the Crescent Golf Club, Dulkoski was able to continue the improvements that the course started in the fall, as well as welcoming increased play.

“We couldn’t have hoped for better weather — it’s been fantastic,” said Dulkoski. “Play has definitely increased and memberships have more than doubled.”

Dulkoski, who has had a successful industrial supply business for 21 years, acquired the golf course last September, “strictly for the challenge.”

When he made time to play golf, Dulkoski played at The Crescent and had noticed that things could be better.

“I wanted to do something else, one more time in my work life, something different from what I’ve done for most of my life,” explained Dulkoski. “So far, I’m happy with the decision that I’ve made.”

Dulkoski and his wife, Tricia, are Ohio natives who met while playing college basketball at Muskingum University. After living in Florida for five years, the Dulkoskis moved to the Rowan County area in 1997.

Since the sale, Dulkoski has overseen the renovation of all 32 sand traps, the main complaint that members had about the course during the recent past. The work included proper drainage for the bunkers, too.

Several of the tee boxes are getting new sod, a lot of trees have been trimmed and some were removed. Soil erosion issues have been addressed as well. There is new signage and landscaping around the club house, located at 220 Laurel Valley Way.

And, of course, the new name, which speaks of a rebirth of the John LaFoy-designed course.

“The bunkers were unsightly … not very good at all,” said Dulkoski. “Trying to create a separation of the rates for members and the general public, because the course needed to be cared for better, you couldn’t change but so much.

“You really need that separation in rates, so that the members feel that they’re getting a value,” continued Dulkoski, who added that the club now has newer carts for members that feature more cushion and USB ports. “We’re just trying to do some things for the members because they’ve stuck it out through thick and thin.”

Dulkoski is appreciative of LaFoy’s work and has no plans to change the integrity of the course or any of the holes.

“The architect did an outstanding job and people say all of the time that it’s one of the best layouts around … and has the best greens,” Dulkoski said. “It had just been neglected. We’ve improved the rough and aerated the greens in September — the first time that’s been done in a long time.

“It’s a challenging golf course, without very many short holes,” continued the new owner. “The greens are big and depending upon which tees you play from, it can be played very differently.”

“My goal is to improve the course,” Dulkoski said, matter-of-factly. “It’s not strictly about making money but about making this place place as good as it can be. Is it going to be Augusta National? … of course not, but we’re going to work towards that. The Crescent community certainly deserves something better than what they’ve had over the past several years.”

Sean Whitelavich has continued as the head golf professional at The Revival. He was joined recently by Dulkoski’s new course superintendent, Bryan Graham, a West Rowan and N.C. State graduate.

There is a current membership drive underway and Whitelavich oversees the weekly events like the Thursday night “shootouts” and Saturday morning “dogfights,” which includes food provided by the course.

The Revival at the Crescent has two entrances. The main one is off of Jake Alexander Boulevard North, near Isenberg Elementary School. The other is off of West Innes Street, just north of Catawba College.

In the early 1990s, local resident Tom Kern owned the property and put in a golf driving range. A few years later, on Dec. 27, 1996, the 260 acres were purchased by Salisbury natives Tim Smith and Jim Riddle and Nebraskan Bill Kubly, with the intent to build an 18-hold course.

Kubly had built Old North State Club at Uwharrie Pointe and Pinehurst No. 8, although Tom Fazio designed those courses.

The Crescent was constructed throughout 1997-98 and the opening date to the public for the 6,800-yard (blue tees), 18-hole, championship par-72 course was Aug. 17, 1998, under the ownership of Salisbury Golf Partners, Limited Liability Co.

One highlight of the early years came in March 2000, when The Crescent hosted a Carolina Blond Amateur Golf Tour event.

In 2001, GolfCarolina.com, a TravelGolf.com publication, rated The Crescent Golf Club No. 4 on their Top 10 Best Values of Charlotte, saying: “John LaFoy designed the course, which winds its way through an old dairy farm and is as interesting and in as good of shape as anything you’ll find in Charlotte for the money.”

After the course opened, an upscale residential development has been built throughout it. Before last year’s sale, the golf course, in the opinion of some, was not living up to the quality of the homes.

Again, Dulkoski wants nothing more than to change that thinking and live up to the old review the golf publication.

“There’s been strides made since we’ve been here and people have recognized it,” said Dulkoski. “It’s eventually going to be an upscale course. We’ve had members and people in the community, who have come by and said, ‘if there’s anything we can do to help’ … the outpouring, I couldn’t ask for anything more. If we had a suggestion box, it’d be running over.

“People want to come out here and play golf, have a good time and socialize a little bit,” continued Dulkoski. “Is it ever going to be a country club? .. no, it’s a golf club. That’s what it is and that’s what we want it to be. A country club is more than golf. Not everyone who belongs to a country club plays golf, but everyone that walks through our doors, you would think that they love the game of golf. So, we want to provide a good product for them because they come here for the love of golf.”

At least one local golfer, Chris Sifford, is happy with the new ownership. “The course looks better already, like night and day,” said Sifford, a former star athlete at both North Rowan High School and Lenoir-Rhyne University. “I’ve been impressed. The greens are coming back and it’s just better around here.”

Of course, the Dulkoski family is “all in,” especially young Kaiden, a baseball and basketball player who is quickly developing a love for golf.

“My wife has always been very supportive of everything that I’ve done and one thing that I don’t want to let happen is to spend less time with Kaiden,” noted Dulkoski. “I certainly spent a lot of time with Kelly growing up in athletics or whatever she did, whether it was piano or tennis or basketball. I don’t want to cheat Kaiden out of that. He enjoys being out here and I’m happy about that. I’m hoping that he’ll turn into a good golfer because of this opportunity. That’s certainly not why I bought it, but spending time with him on a daily basis is important. And yes, he does think it’s pretty cool that Dad has a golf course.”