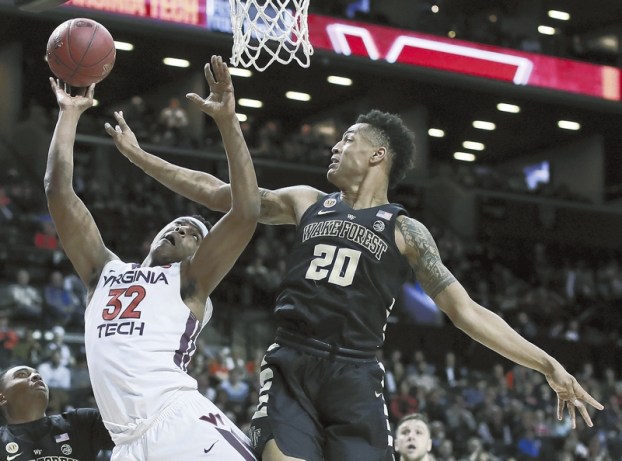 Virginia Tech forward Zach LeDay (32) puts up a shot against Wake Forest forward John Collins (20) during the second half of an NCAA college basketball game in the second round of the ACC tournament, Wednesday, March 8, 2017, in New York. Virginia Tech won 99-90. (AP Photo/Julie Jacobson)

NEW YORK (AP) — Virginia Tech coach Buzz Williams brings his top two scorers off the bench. Maybe that’s part of the reason it took the Hokies a while to get going Wednesday night.

Once they did, they sailed right into the quarterfinals of the Atlantic Coast Conference Tournament.

Zach LeDay had a career-high 31 points to go with 15 rebounds as Virginia Tech stopped Wake Forest’s late-season charge with a 99-90 victory, overcoming an 80-foot shot by the Demon Deacons in their second-round matchup.

Seth Allen scored 18 points and Justin Bibbs had 15 for the seventh-seeded Hokies (22-9), who took over in the second half after a slow start. They’ll play second-seeded and 16th-ranked Florida State in the quarterfinals Thursday night.

“I just didn’t want to go home,” LeDay said. “We weren’t playing as hard as we needed to.”

Allen and LeDay each won an ACC Sixth Man of the Year award this season.

Williams, perpetually hoarse, was asked to explain why they don’t start.

“I think it’s an unspoken symbolism of what we want the culture of our program to be about,” he said.

Bryant Crawford had 21 points for No. 10 seed Wake Forest (19-13), which had won four straight in a desperate drive for its first NCAA Tournament trip since 2010. Now, the hopes of the Demon Deacons rest in the hands of the selection committee on Sunday.

“I’ve been around this game a long time. Sometimes it’s not very logical. We’re going to sit back and wait. That’s our reality,” coach Danny Manning said.

John Collins, runner-up for ACC player of the year, added 15 points and 10 rebounds for Wake Forest before fouling out with 1:06 to play.

Wake Forest won 89-84 at Virginia Tech in the regular-season finale for both teams last Saturday, a huge victory for the Demon Deacons in their postseason push. They rallied from 13 down in that game, but this time it was the Hokies who came back after a stunning shot at the end of the first half.

Reserve forward Greg McClinton electrified his teammates — and left the Brooklyn crowd buzzing — when he connected on an improbable heave from behind the elbow of his own foul line to give Wake Forest a 44-37 lead.

Ecstatic teammates mobbed McClinton on the baseline as he raised his arms and fans roared. Officials reviewed the replay, and the basket counted.

It was the first career 3-pointer and the only points of the night for McClinton, who played all of two minutes.

Virginia Tech shot 61.5 percent in the second half, including 7 for 13 on 3-pointers, and outscored Wake Forest 62-46. Trailing by 12 with 1:06 remaining, the Demon Deacons cut the margin to four just 37 seconds later before LeDay helped the Hokies seal it at the free throw line.

“We just really played together,” Allen said. “Every time we got into the paint, we found the open man, and he just drove it again. I thought we did a good job of getting the rebound on defense and just running in transition and kind of tired them out.”

Virginia Tech: With home wins over Duke, Virginia and Miami, the Hokies appear headed to their first NCAA Tournament since 2007 under coach Seth Greenberg. They have won six of eight overall. … The 15 rebounds matched a career high for LeDay.

Wake Forest: The Demon Deacons have already taken a large leap this season during an encouraging turnaround in Manning’s third year as coach. They began the day with an RPI of 34 and are thought to be on the right side of the NCAA Tournament bubble. But they haven’t won consecutive ACC Tournament games since 2006 and are still looking for their first quarterfinals appearance since 2009. They need one win for their first 20-win season since 2009-10. … The Demon Deacons beat Boston College 92-78 in the opening round Tuesday.

Virginia Tech: Lost 93-78 at Florida State on Jan. 7. Allen missed that game with an injury. “We tried some different things for the first time in Tallahassee. I thought we played incredibly hard. Didn’t have enough ammo to beat them,” Williams said.

Wake Forest: Hoping for an at-large bid Sunday to their first NCAA Tournament in seven years.