The end: Gottfried, Wolfpack go out with thud 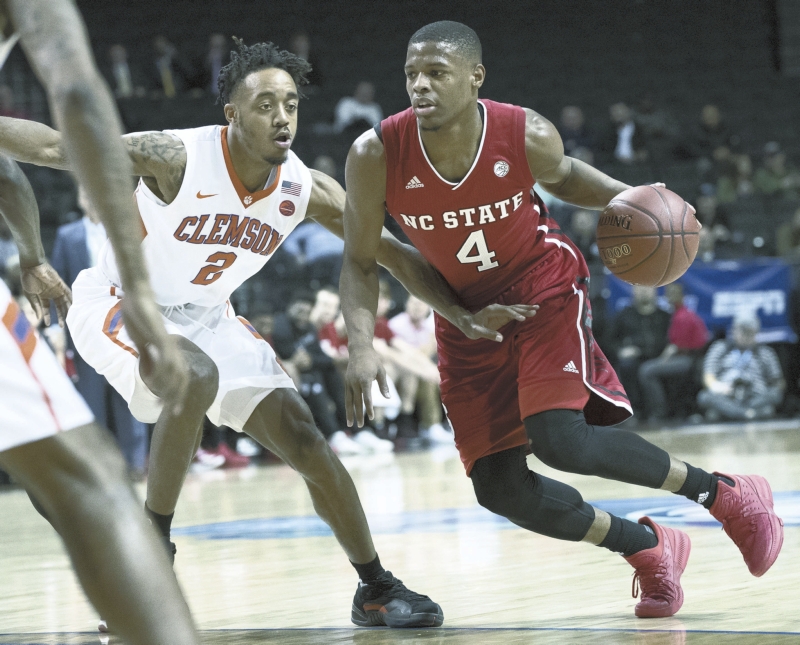 NEW YORK (AP) — North Carolina State’s Mark Gottfried and star guard Dennis Smith Jr. walked off the floor together at Barclays Center, the coach with his arm around the waist of the potential lottery pick.

Their season did not go as planned. The fired coach definitely won’t be back and player is probably gone, too. The finale of a brief and disappointing era in for N.C. State was, fittingly, another dud.

Smith was held to a season-low seven points and the Wolfpack were eliminated from the Atlantic Coast Conference Tournament 75-61 by Clemson on Tuesday.

Jaron Blossomgame and Shelton Mitchell each scored 22 points for the Tigers in the first ACC Tournament game ever played at the Barclays Center in Brooklyn. No. 12 seed Clemson (17-14) moves on to play fifth-seeded Duke on Wednesday.

It has been a lost season for N.C. State (15-17), seeded 13th. Gottfried was notified three weeks ago that he would not be back next season. In six seasons with the Wolfpack, he finishes with a record of 123-86 at N.C. State.

“It’s sad for me,” Gottfried said. “I came to N.C. State hoping to be here for the rest of my career.”

He added: “I got all kind of thoughts. I got everything running through my mind. Deep down, just disappointed.”

Gottfried took the Wolfpack to the NCAA tournament each of his first four seasons and they reached the Sweet 16 twice. But after missing the postseason last year, N.C. State hoped to bounce this year with Smith. The Wolfpack never clicked and lost 11 of 12 down the stretch.

“Unfortunately, for Dennis, just kind of the way it fell this year, there’s a lot of inexperience around him. That’s hard. He’s inexperienced,” Gottfried said. “You’ve got inexperience everywhere. That made it really hard on him as the quarterback of a team to play with so many young faces.”

Smith didn’t score until he hit a jumper with 43 seconds left in the first half against Clemson. He finished with a season-low seven points on 3-for-12 shooting, with four turnovers.

“I think he’s handled a tough situation as well as you can handle,” Gottfried said. “I think they all have, no question about it. Tons of expectations put on Dennis to be savior of the program. He’s got great things that are going to happen for him in his life.”

Smith called his season “unfortunate,” but said he was not ready to announce whether he would be one-and-done as so many expect.

Midway through the second half, he got trapped near the sideline by the Tigers and it led to a shot clock violation for the Wolfpack. Marcquise Reed then delivered a 3-pointer at the other end to make it 59-43, giving Clemson its largest lead to that point.

Smith said Gottfried told him as they walked off to “stay positive and never be defeated.”

N.C State: The Wolfpack looked like loose and energetic team at practice on Monday, coming into the tournament with nothing lose. They played like a team looking forward to wrapping things up. They committed 15 turnovers, allowing 21 points off the giveaways, and never made a charge in the second half.

Clemson: The Tigers have won three straight. Blossomgame and Mitchell carried them against North Carolina State, shooting a combined 17 for 30 while the rest of the team was 12 for 38. Clemson will need contributions from more than just their stars against Duke.

“I think just at Duke, we missed a couple of opportunities to get the lead, winning the game,” Mitchell said. “They’re a great team. They space the floor. They have a lot of weapons.”

N.C. State: The focus now becomes finding the next coach.

“N.C. State is a wonderful place,” Gottfried said. “Different than every other job in this league. You look around all these banners, all these other schools, nobody else is compared daily the way our guys and our program is to North Carolina and Duke. They’re just not.”

Clemson: The Tigers lost at Duke by two in their only meeting this season. The Tigers have lost 10 games by six points or less.

“It’s not easy to come back to practice every week when you’re losing one-point games, two-point games, one-point games in a variety of ways,” Clemson coach Brad Brownell said. “Some of the reason for that is the character of the guys I coach.”