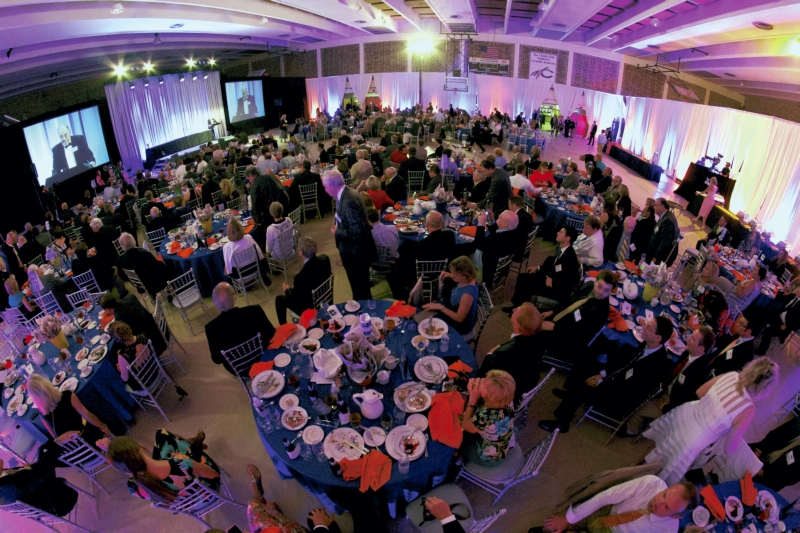 The awards banquet in the Catawba College gymnasium during the 2015 National Sportscasters and Sportswriters Association event. Photo by Andy Mooney, Salisbury Post.

SALISBURY — When the National Sports Media Association said the other day it is leaving Salisbury after 57 years, it wasn’t quite like the Baltimore Colts packing up the moving vans and exiting the city in the dead of the night for Indianapolis.

But it was close.

We were fans, and we had lost a team born here and one we had nurtured through the toughest of seasons and the greatest of triumphs — what else would entice Bob Hope or Flip Wilson to come here and entertain us?

For much of its existence, everything about the NSSA screamed small-town. That was the beauty and uniqueness of it, and also surely the reason for its eventual Salisbury demise.

An old boxing promoter and restaurateur, Pete DiMizio, had the idea for the NSSA as early as 1957.

Every fall, DiMizio served as host for a Salisbury banquet in appreciation of area sports reporters. It became so popular, he and a few others — among them late Post sports editor Horace Billings — decided it should go national.

It was an odd, highly ambitious concept: Ask sportscasters and sportswriters to vote for the best in their business, by state and nationally, and invite them all to meet in a small Southern town for an awards banquet.

DiMizio and his wife, Becky, and Billings put together a mailing list leading to 6,000 ballots being mailed out nationwide. When DiMizio died of cancer in 1958 while the votes were still being collected, his dream seemed to die with him.

That’s when a relentless Dr. Ed McKenzie, a young Salisbury surgeon, stepped in. At much personal expense and seeing his practice suffer, McKenzie made countless telephone calls and even a trip to New York to badger national winners Lindsey Nelson and Red Smith to attend the first NSSA banquet in 1960.

Along with them, winners from 41 states also showed up in Salisbury, and more than 100 local residents volunteered as hosts.

In the years to come, the NSSA became a homespun weekend every spring for the state and national winners. There was a time in the 1960s and 1970s when it stood out as the social and civic highlight of the year.

A local committee of volunteers transported the sports reporters and other guests to and from the airports. The sportscasters and sportswriters were paired with Salisbury hosts, and often they even stayed in the homes of Salisburians and became good friends.

Wives of the winners attended local lunches and fashion shows. There were golf and tennis tournaments for the visitors. The NSSA scheduled breakfasts, lunches and dinners. Nights were filled with receptions at Salisbury homes.

How did John Mellencamp say it?

That was Salisbury and the NSSA.

Over time there were seminars, workshops, book signings and clinics built into the weekends. The hosts usually sat with the winners at the awards ceremony, where sometimes entertainers such as Hope and Wilson would be the headliners.

Hope came, for example, only because McKenzie again refused to give up.

An NSSA Hall of Fame developed, and there were dreams of thousands of people coming to Salisbury yearly to see it. The NSSA, which became a membership organization, even bought a building on East Innes Street to house a Hall of Fame.

Broadcast and sportswriting legends were added to the Hall of Fame yearly. In 1990, then-NSSA President Claude Hampton and Dr. Bill Mason of Salisbury traveled to Los Angeles to present President Ronald Reagan with the plaque signifying Reagan’s induction into the NSSA hall.

But there were inherent problems in the way the NSSA was organized. For a long time, the same people seemed to win every year because the same limited NSSA membership was casting the ballots.

Dues alone weren’t enough to support all the expenses — such as flying in and housing the winners — and in a small town such as Salisbury, the large corporate sponsors didn’t exist.

The ability to operate the NSSA on a shoestring budget disappeared as times changed, and the enthusiastic community involvement waned with the years. We took the NSSA for granted and never bought into the potential of an actual Hall of Fame building, though it was tried.

There’s something the folks in Winston-Salem, which will be the new home for the National Sports Media Association, will have to understand. Sportscasters and sportswriters appreciate recognition for their work, but they know they aren’t the stars.

They gladly come once a year, accept their awards and go back home, pretty much forgetting about the NSMA because they have work to do.

DeFord, who was National Sportswriter of the Year many times, once compared the honor to being the world’s tallest midget — his way of saying people who follow sports are more interested in who’s playing, not who’s writing.

Is there a mass audience interested in the sports media themselves? That was always the question, and the albatross is this: Beyond the annual awards gathering for two or three days, what sustains the organization and makes it relevant the rest of year?

But back to Salisbury and the NSSA. A natural feeling of betrayal exists, given all the sweet memories NSSA provided. No one with the present NSSA should take it personally.

For more than half a century, it was part of who we were.

You have to follow the money. Hampton, a retired Nabisco executive who lived and died with the NSSA for countless years, acknowledged from his home Thursday he is sad to see the organization leave.

“But I can understand it, too,” Hampton said. “… It’s done. It’s going to be missed in Salisbury. It was just a great thing.”