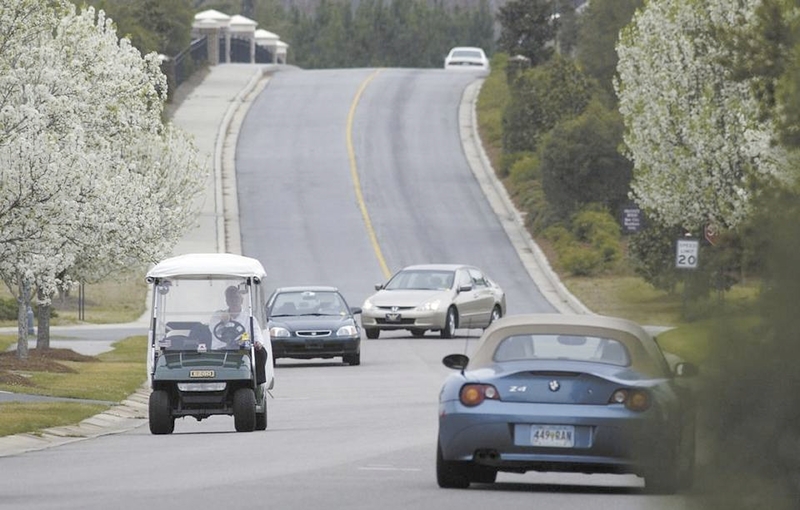 A golf cart travels down the road in Spencer. Charlotte Observer photo

KANNAPOLIS — It’ll take a bit more time before the City Council decides whether it wants to allow golf carts on public streets.

After a mostly negative reception to the idea on Monday, the Kannapolis City Council delayed discussion about allowing golf carts on city streets for another three months. Councilman Ryan Dayvault brought a resolution to the council that was similar to one’s passed in China Grove, Landis, and Granite Quarry. From the start of the council’s discussion, it appeared other members weren’t ready to approve the idea as presented.

“In your liability disclaimer, it even says golf carts are not designed or manufactured to be used on the streets and that’s even what the golf manufacturers, themselves, say,” said Councilman Roger Haas. “Why would we be putting forth an ordinance to drive them on the streets when the manufacturer says it’s not a good idea to do it?”

Haas discussed golf cart ordinances in other cities and towns during his comments at the start of discussion. In Cary, for instance, Haas said golf carts could only be operated in subdivisions with 1,000 dwelling units. Haas said he always visualized golf carts in beach and retirement communities instead of a city such as Kannapolis.

He noted that Surf City, located on the coast, recently reversed a decision to allow golf carts on its streets.

The specific item up for consideration on Thursday would have limited the speed of golf carts to 20 mph, required drivers to be over 16 with a driver’s license, required insurance on the golf carts, and permitted the vehicles only on streets with a 35 mph speed limit. The golf carts would need to be registered with the Kannapolis Police Department.

Councilman Darrell Jackson said he understood concerns expressed by Police Chief J.W. Chavis — that golf carts could be a safety corn on well-traveled roads. Jackson said he thought a golf cart ordinance might work if confirmed to downtown.

Councilman Tom Kincaid said the ordinance needed refinement. Kincaid questioned whether it would be better to wait until a future date.

Dayvault addressed concerns expressed by council members. He said several citizens asked if it would be possible to allow golf carts on city streets.

Near the end of discussion, Mayor Darrell Hinnant called the golf cart proposal “a fairly low-priority item” compared to other things the city council hopes to accomplish. Hinnant was the most critical of the proposal.

“I have genuine concerns that this is a risky, risky, risky business,” Hinnant said. “While I appreciate the fact that we have a few citizens who want to do that. I don’t know that we want to pass an ordinance for a few citizens that is going to probably cause accidents for several citizens along the way.”

Hinnant said he was against allowing golf carts on city streets unless there are “massive changes.”

He noted that China Grove and Landis have town laws that allow for golf carts on city streets, but “they don’t have the main thoroughfares that will complicate driving golf carts.” Comparing China Grove to Kannapolis is like comparing apples and oranges, Hinnant said.

Initially, the council had considered delaying the idea for just two months. After council members questioned whether that might not be enough time, Dayvault offered three months as an appropriate amount of time to delay consideration. It passed unanimously.