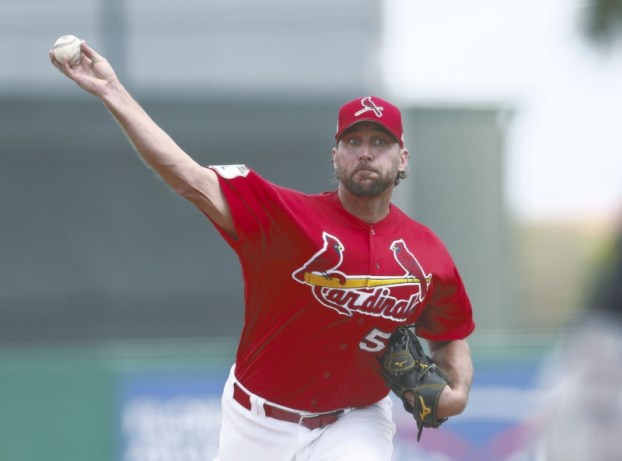 JUPITER, Fla. (AP) — St. Louis Cardinals pitcher Ryan Sherriff thought clubhouse prankster Adam Wainwright was taking him for a ride. Turns out, Sherriff was about to be given one.

When the Cardinals’ traveling secretary asked Sherriff for his driver’s license, the 26-year-old left-hander thought someone was trying to mock his photo, which still featured a picture from his high school days.

Sherriff spent last season at Triple-A Memphis and has an outside chance at making the big league roster. He couldn’t afford to ship his car from California to Florida for spring training, so he rented a house about 10 minutes away. He’s been walking to camp, to the store and pretty much everywhere else this spring. There was no need for a license.

Three times Wainwright drove past Sherriff on his way to the ballpark. After offering Sherriff a bicycle, which the reliever appreciatively declined, Wainwright asked traveling secretary C.J. Cherre to get Sheriff a rented car. Wainwright took care of the bill.

“That’s the kind of thing that happened to me when I was younger,” Wainwright said. “I remember I wore a couple of tired collared shirts in a row to the field and Mark Mulder bought me a whole box of collared shirts.”

To rent the car, Cherre needed Sherriff’s license. The young pitcher began to suspect something was up.

“So I run into Waino in the dugout I’m like, ‘Hey, man, are you pulling a prank on me with my ID?’” Sherriff said. “He grabs me by the shoulder. He’s just like, ‘Yeah, you better watch out.’”

A few hours later, while cooking Wednesday night’s dinner, Sherriff received a call from Cardinals clubhouse man Ernie Moore. The keys to a Nissan Altima were waiting for Sherriff in his locker.

“I got out of my house, I started walking,” he said. “I called my mom. I started crying because it’s the nicest thing anyone’s ever done for me.”

Knowing that Wainwright favored Chick-fil-A, sweet iced tea and barbeque sauce, Sherriff immediately drove to the fast-food restaurant to purchase a gift card and to a supermarket to pick up some tea and sauce. He left it in Wainwright’s locker along with a thank-you card.

“I walked right up to him and gave him a hug,” Sherriff said. “He hugged me back. It was pretty cool.”

A few hours after Wainwright tossed Sherriff a curveball with the new wheels, the longtime ace rediscovered his own.

Last season was Wainwright’s first full year since tearing his Achilles tendon in 2015. He struggled with the feel of what was once a devastating curveball. He went 13-9 after posting 39 wins over the previous two seasons.

This week, after watching his own instructional internet video on how to throw a curve, Wainwright realized his grip had shifted slightly. The old grip brought back the old hook.

“I’ve got my curveball back,” the three-time All-Star said after Thursday’s outing, his first of the spring. “It is so great to have it back.”

Wainwright allowed a leadoff homer to Dansby Swanson and a two-run shot to Adam Walker in the first inning of the Cardinals’ 9-4 victory over Atlanta. But Wainwright also fanned three of the 16 Atlanta batters who struck out Thursday — two on curveballs.

“I don’t love giving up homers but I’m actually really, really, really fired up about my stuff right now,” Wainwright said. “I’ve got to work on my cutter. Both of the homers were on sloppy cutters, but the other stuff is really good.”

By Luke Meredith AP Sports Writer Unheralded NASCAR driver Landon Cassill has set himself apart as something of a social... read more