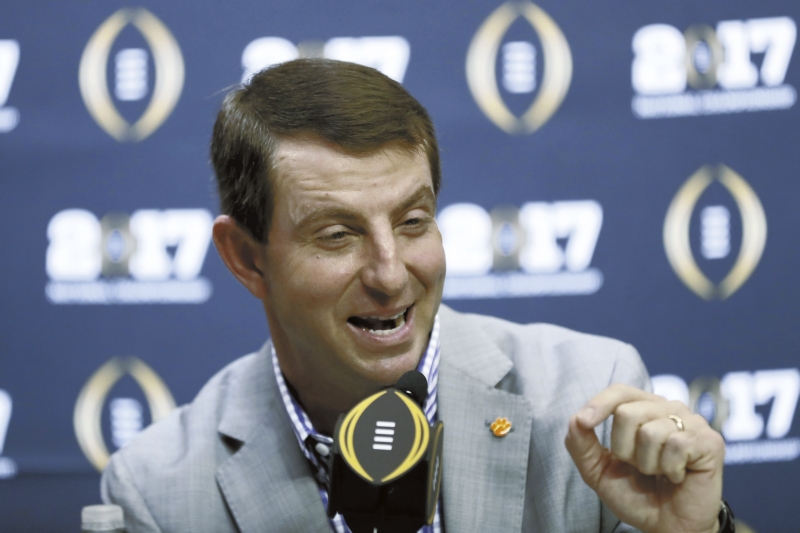 FILE - In this Jan. 7, 2017, file photo, Clemson head coach Dabo Swinney answers questions during media day for the NCAA college football playoff championship game against Alabama, in Tampa, Fla. Swinney walked into offseason drills last month and spun his head around. “I was looking for Deshaun (Watson) and I couldn’t find him,” Swinney quipped Wednesday, March 1, 2017. It will be a year of adjustments and change for the Tigers, who began spring drills less than two months after Watson led them to the program’s second national championship.(AP Photo/David J. Phillip, File)

“I was looking for Deshaun (Watson) and I couldn’t find him,” Swinney quipped Wednesday.

It will be a year of adjustments and change for the Tigers, who began spring drills less than two months after Watson led them to the program’s second national championship.

On defense, the Tigers are without leading tackler linebacker Ben Boulware, sacks leader defensive tackle Carlos Watkins and top cornerback in Cordrea Tankersley. Their absences leave plenty of areas of concern for fans and analysts to mull over.

Swinney won’t be part of the hand-wringing.

The coach believes his program has built its depth to withstand seeing some of the game’s best walk out the door.

“But like I tell these guys all the time, there’s no lifetime contracts,” Swinney said.

The coach would be comfortable with Bryant leading the way in September, but will let the competition beginning this spring decide who’ll start.

“Maybe it gets resolved in the spring, maybe it doesn’t,” Swinney said of the quarterback situation.

Clemson hasn’t gone through much uncertainty at quarterback since Watson took control of the position three games into his freshman season in 2014.

That spring, Watson was promising youngster attempting to gain a foothold in the race to succeed ACC player of the year Tajh Boyd over returnees Cole Stoudt and Chad Kelly. Watson might’ve won the spot, too, had it not been for a fractured clavicle late that spring.

Kelly took himself out of the race, getting dismissed from the team shortly after a heated exchange with coaches on the sidelines of the spring game. Kelly followed that with a contentious meeting with Swinney that sealed the player’s fate.

That left Stoudt, the reliable senior, as the starter entering the season — a position that Watson quickly took over with his steadier performance the first three games.

“These things work themselves out,” Swinney said.

Bryant, a 6-foot-3 sophomore in his third spring, knows he’ll be measured by Watson’s amazing output. Watson was the first in the Football Bowl Subdivision to throw for more than 4,000 yards while rushing for over 1,000 yards in 2015. He was 32-3 as Clemson’s starting quarterback and threw the winning TD to Hunter Renfrow with a second left for a 35-31 victory in the national title game against Alabama.

“I’m just trying to be myself. I’m not trying to be Deshaun,” said Bryant, whose cousin Martavis Bryant played at Clemson before joining the Pittsburgh Steelers. “I’m just going to play my game.”

Christian Wilkins sees the same thing happening on defense, where those tasked to fill in for past performers will shine. Wilkins, a junior next season, is moving from defensive end to tackle, his position as a freshman before an injury to Austin Bryant last year pushed Wilkins outside.