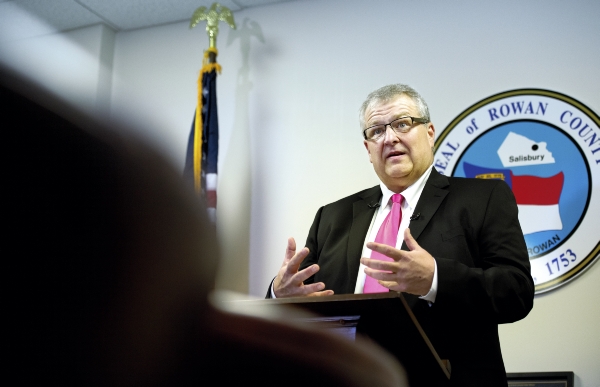 SALISBURY — A new idea has emerged on how to stem the tide of gun violence in the city.

That idea would be for Rowan County Sheriff Kevin Auten to take over “operational responsibility” of the Salisbury Police Department, said County Commissioner Craig Pierce and City Councilman Kenny Hardin.

The arrangement wouldn’t be permanent, but county government should do more to help with crime in the city limits, Pierce said. Already, sheriff’s deputies can work overtime as police officers.

“Salisbury needs some help, and we’re more than willing to put up the resources,” Pierce said. “I’m not after pointing fingers and saying, ‘Y’all can’t handle it. Let us come handle it.’ But we’ve got to do something other than what we’re doing.”

In recent months, gun violence has rattled Salisbury. Local leaders in December called for an end to gun violence when 7-year-old A’yanna Allen was shot and killed. County and city governments offered $10,000 each for information leading to the arrest and conviction of people responsible for her death. They also approved the agreement allowing sheriff’s deputies to work overtime as police officers.

Still, the shootings have continued.

To discuss ideas related to crime and policing, Pierce and Hardin said they recently had a meeting that included County Manager Aaron Church, Sheriff Auten and County Commissioner Mike Caskey. Pierce called it a “bounce it off of you” meeting where ideas on stemming the tide of gun violence were tossed out.

Hardin said it’s time to take “extreme measures.” Auten has the connections and professional experience to take over on an interim basis, Hardin said.

Pierce said he is opposed to the sheriff becoming permanently responsible for policing in the city. Instead, the Sheriff’s Office would “take it over until things get stabilized.”

On Wednesday, Auten said he is willing to do whatever helps create a safe community.

“I stand more than ready to assist them in any way,” Auten said.

Hardin did not say whether he had talked with Police Chief Jerry Stokes about the idea. When asked if Stokes said he needed additional help from the county, Hardin said: “Well, if he doesn’t, that falls into that pride and ego part I mentioned.”

Mayor Karen Alexander said Wednesday that she had not known of Hardin’s plans to explore further county help.
“That’s one council member’s opinion, and nothing has been discussed with the council,” Alexander said. “We were as blindsided as anyone.”

Commissioner Caskey, a police officer himself, said Pierce and Hardin seemed to be the only participants in the recent meeting who are interested in the proposal. And it’s unclear how the plan would work, he said.

“I just see too many problems in it,” Caskey said. “It’s not something I support. I don’t know how, legally, you could do that. … You would have to disband the Police Department.”

City spokeswoman Linda McElroy responded to questions from the Salisbury Post by saying she does not anticipate that Auten will take over operational responsibilities of the Police Department in the near future.

During a City Council meeting on Feb. 21, the police chief spoke to council members about a litany of action he is taking to combat local gun violence. Stokes cited talking to federal agencies about bringing an organized crime task force to Salisbury and asking for two more State Bureau of Investigation agents to be assigned to Rowan County.

Stokes said the Federal Bureau of Investigation recently received a “load of data” from the Police Department that it plans to analyze.

The Police Department also faces a significant shortage of officers. Stokes said there are roughly enough new police officers per year to fill only one vacancy in every department in the state. One officer wouldn’t be enough to for Salisbury.

Commissioners Chairman Greg Edds said the county has been working to offer increased support for the city and its police force. He noted a new detective position approved for the Sheriff’s Office as an example. The detective will work on violent crime and drug trafficking.

Edds said Monday’s commissioners meeting will include a discussion about adding six new deputies to the Sheriff’s Office. The new deputies would form a Crime Reduction Unit, Edds said.

“We will continue to work with Sheriff Auten, the Salisbury police, and leadership from around the county to create a response that will bring safety back to the streets for all Rowan County’s residents,” Edds said.

On Feb. 21, Stokes told the City Council about steps the city has taken to recruit new officers. Experienced officers who join the force can receive a $5,000 sign-on bonus. Stokes said he is also working to see if reserve and retired officers would be willing to work on a part-time basis.

Asked about the steps Stokes has taken, Hardin said he would rather see Salisbury take advantage of any help the county is willing to provide than bringing in outside agencies.

Caskey said Pierce and Hardin are frustrated about recent gun violence in the city limits.

“Like everybody else, they keep trying to find answers, and I don’t think we have found them yet,” Caskey said.

He said the county may be able to help more than it already has, but that additional assistance would not solve the problems permanently.

“I think they have some issues they are going to have to work through over there,” Caskey said about the Police Department. “Anything we can do isn’t going to fix the problems.”

Regardless of the solution, Pierce says crime in Salisbury is now a concern of county commissioners.

“I feel like, being an elected official, it’s my responsibility to do what it takes to come up with ideas to solve the problem,” he said.

Another idea Hardin said he and Pierce have discussed would include fixing up abandoned or dilapidated houses. A police officer or teacher would then move into the house. Hardin said it would be a “preventative measure.”

A man wanted in Rowan County and Virginia led Iredell County deputies on a chase along Interstate 77 on Wednesday.... read more