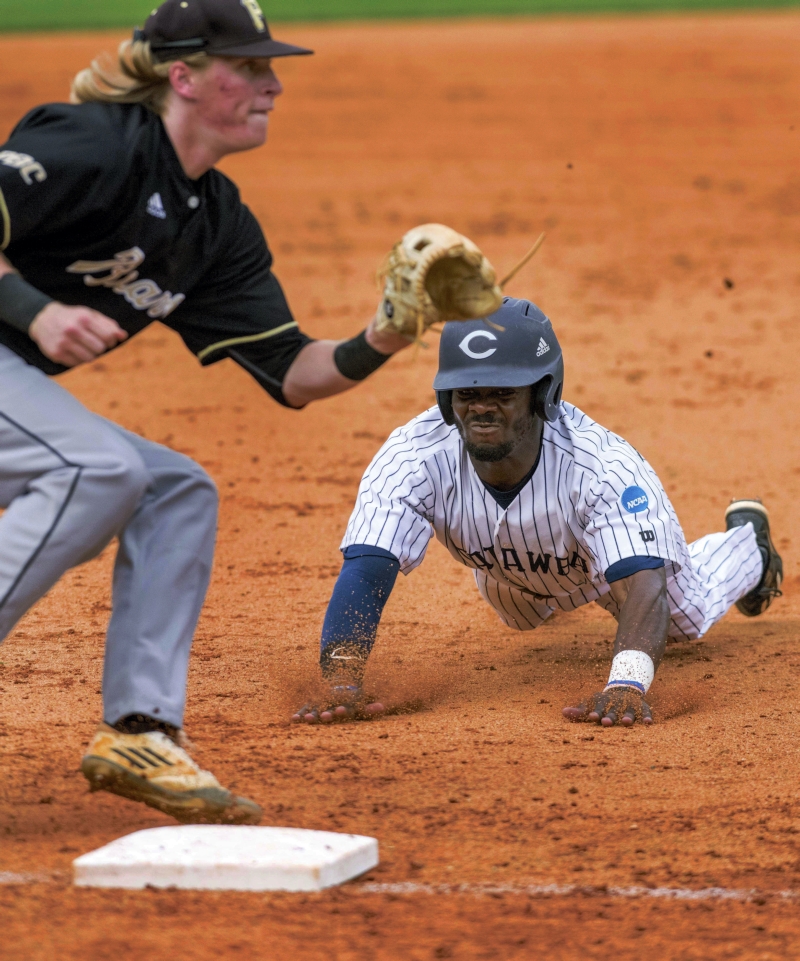 SALISBURY — Luke Setzer sent an opposite-field homer screaming over the right-field wall to lead off the bottom of the first inning, and the merry-go-round continued at Newman Park.

Before the lightning and rain arrived in the bottom of the seventh, Chance Bowden and Nick Coble had also knocked balls out of the yard in a 15-11 Catawba victory against a strong UNC Pembroke club.

“The scores so far have been kind of ridiculous,” Catawba coach Jim Gantt said. “But a lot of it is the weather. I don’t remember this many warm games so early in a season. And today the wind was blowing out on top of it.”

“It’s definitely my first four-hit game in college,” Simpson said. “It’s just kind of crazy right now how we’re hitting the ball. Everyone in the lineup is hitting.”

Catawba (11-3) won its ninth game in a row. Malachi Hanes had three hits.

Catawba is batting 375 as a team and is averaging 11 runs per game. Six regulars, including Bowden (.419) and Simpson (.352), are batting above .350. Setzer, a solid, but not earth-shaking player in his days at East Rowan High, suddenly has become one of the hottest hitters in America.

Setzer was tied for second in Division II with 30 hits when Wednesday’s game started. UNC Pembroke held him to a 2-for-4 (with one lineout), but the two-time South Atlantic Conference Player of the Week is batting .533.

Catawba began the game with six consecutive hits. There was Setzer’s homer, a single by Kyle Smith, a double by Zac Almond, Coble’s homer, and then singles by Bowden and Malachi Hanes.

“UNC Pembroke is always a good team, and we knew we’d have to really hit,” Bowden said. “Luke got us going again, and then everyone followed.”

“He kept telling us the lead wasn’t safe, that we needed to keep adding on,” Bowden said.  “It was a good thing we got a bunch early. They brought in some good arms from the bullpen.”

Catawba was up 10-2 in the bottom of the fourth, looking to add more runs, when Setzer lined into an inning-ending double play with runners at first and third. That swung momentum and triggered a comeback by UNC Pembroke (12-3).

Catawba starting pitcher Bryan Ketchie, a freshman lefty from West Rowan, cruised until the top of the fifth. Gantt wanted to give him every chance to earn a win by going five innings, but when he surrendered back-to-back homers, Catawba’s lead was down to 10-5.

“He threw a couple of fastballs, and they went out of the park,” Gantt said.

Ketchie (3-0) ended the fifth with a strikeout and did get the win.

UNC Pembroke had a long, five-run top of the seventh that got the Braves within 13-11.

Catawba had to go back to work in the bottom half of the inning, and with skies darkening to the west and rain on the way, Bryce Fowler singled home a run, and Simpson lifted a drive off the left-field wall for a run-scoring double and a 15-11 lead.

Catawba had the bases loaded with no outs when lightning flashed and play was halted. A downpour transpired not long after that.

Despite being stopped in the seventh, the teams combined for 34 hits, including seven homers and 11 doubles. Nick Debo hit two of UNCP’s four homers.

Catawba plays a SAC series at Lenoir-Rhyne this weekend.

Play stopped by lightning in bottom of the 7th inning.