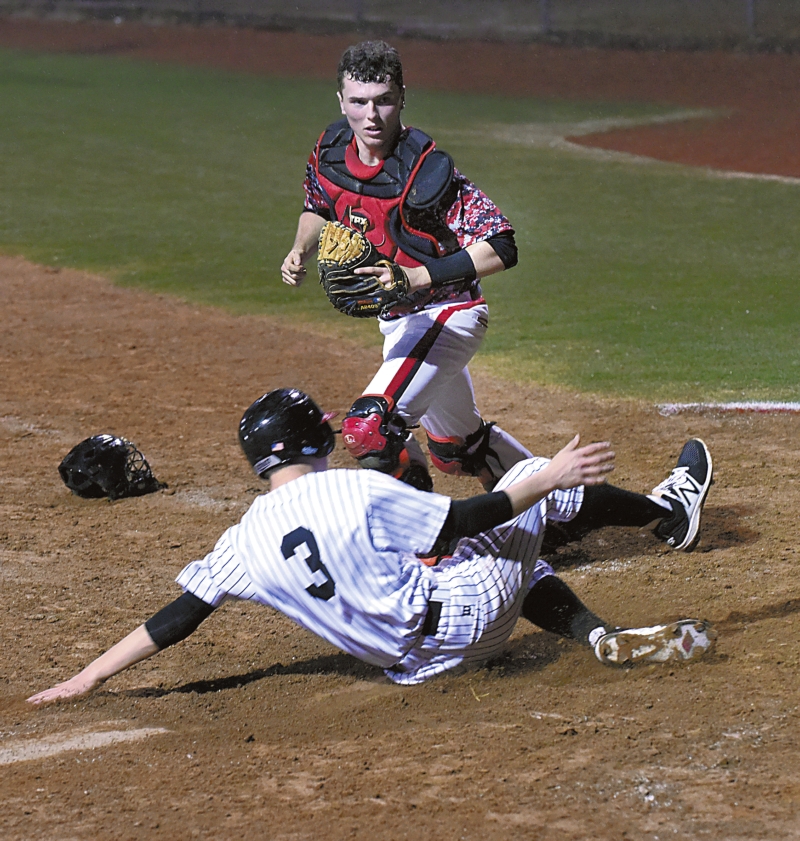 Myers (5-10, 170) is only a little bigger than he was in 2016,  but he’s a lot stronger, and the tag-team partner for added strength is always added confidence. The new, improved Myers had all three of his pitches working on Tuesday and carried the Hornets to a 2-1 opening night victory against South Rowan at Robertson Stadium.

“We evaluated things, and the thing that we needed the most was for our guys to get stronger,” Herndon said. “Griffin bought in. He’s spent a lot of time in the weight room. We made some mistakes in the field and on the bases tonight, and we didn’t hit a lot, but we pitched it very well. Griffin beat a good team.”

Myers allowed two hits and two walks and he hit a batter. He wasn’t expecting to go the distance on opening night, but there was never much reason to get the bullpen busy.

“I was just  hoping I could go five innings, but guys were making plays behind me and I ended up with a complete game,” Myers said. “I’m more confident this year. When you see that ball flying out of your harder than it used to, it does give you some confidence.”

The schools split last season, but it was an odd split. Salisbury beat South in March, 10-4, its first win against the Raiders in 16 years, but then South annihilated the Hornets in the Intimidators Easter Tournament, 19-4.

“They spanked us, spanked us good,” Myers said. “So I wanted to win this one bad.”

Myers had to battle the elements as well as the Raiders. The game was played in a steady drizzle. There was never any threat of a delay, but it was wet and uncomfortable.

“The rain didn’t really bother me, but I was having to put the ball under my arm pit to keep it dry,” Myers said.

“We did some good things,” Chrismon said. “We got down bunts, and we pitched it well enough. But we have to score more than one run. Our defensive mistakes led to both of their runs, and we can’t be striking out when we’ve got a runner at third with less than two outs.”

Myers pitched around a leadoff double down the left-field line by Hayden Wilson in the second inning to keep the game scoreless.

South got on top 1-0 in the fourth when Tyler Shepherd reached on an error, Wilson was hit by a pitch, Walker Joyce laid down a sac bunt, and Garrett Harrington punched a run-scoring groundout.

Salisbury got that run back in the bottom half of the inning when Bo Rusher singled and advanced on an error. Then Chandler Lippard, who had three straight hits, singled to right to drive in the tying run.

After Myers struck out No. 3 hitter Shepherd with two men on to end the top of the fifth, Salisbury came in and got the go-ahead run. Will Taylor’s bloop double to center drove it in. That hit, which came off Miller, barely eluded diving South center fielder Dawson Larrimore.

“I had two strikes on me, so I was just trying to put it in play,” Taylor said. “At first, I thought the ball was easily going to fall just over the infield, but the ball kept going, and then I saw him dive. He almost had it.”

Salisbury loaded the bases in the sixth, but Donohue escaped the jam when Shepherd, South’s new shortstop, made a good play coming in on a wet bouncer.

Myers took care of the seventh. The most challenging moment came when Hut Smith fielded a hopper to third and made a long throw that Lippard dug out at first base for the second out. Then Myers ended the game with a strikeout.

“That’s the best way you can end it,” Myers said.

NOTES: Coaching third, Chrismon was struck in the back by a line-shot foul off Shepherd’s bat. He said it didn’t hit him solidly, but he took a tumble on the wet grass trying to take evasive action.  … South travels to A.L. Brown today. Salisbury returns to action on Friday, at home against Trinity. … Two of the best athletes in uniform were in assistant coaching roles — former South star Andrew Morgan (UNC Wilmington) and former Davie County standout Carson Herndon (Liberty).