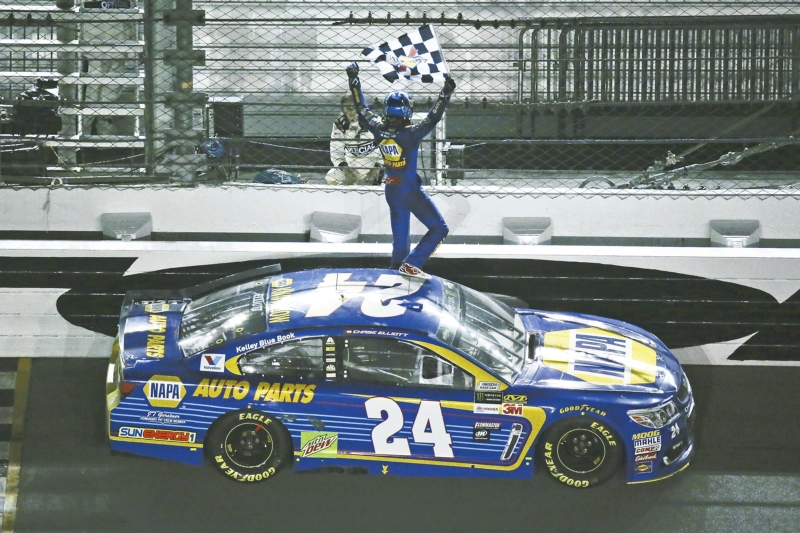 Hamlin charged past Dale Earnhardt Jr. with one lap remaining Thursday night to deny Earnhardt a victory a 150-mile qualifying race that Earnhardt dominated. Earnhardt led 53 of the 60 laps in the second qualifying Duel, but couldn’t hold off a Hamlin charge at the end.

Hamlin got a push from Chevrolet driver Austin Dillon to gather the momentum needed to get past Earnhardt. Typically, the Toyota drivers have teamed together to navigate through traffic in restrictor plate races.

Chase Elliott won the first qualifier, but he had already earned the top starting spot for Sunday’s race based on speed. He and Hendrick Motorsports teammate Earnhardt will start on the front row in “The Great American Race.”

In the qualifying race, Hamlin didn’t need his fellow Toyota drivers and even overcame a pit road penalty to get the win.

“I don’t know what I could have done differently to defend that,” Earnhardt said. “Denny is so smart, he knows what he’s doing out there. Any which way I went, I knew he was going to go the other way and probably get by me. If it’s the Daytona 500, it’s the same thing, ain’t nothing you can do about that.”

It was Earnhardt’s first race in his return from a concussion that caused him to miss the second half of last season. He faded to sixth.

Hamlin is the defending Daytona 500 winner and has won a Duel qualifying race three times in his career. The twin 150-mile races are used to set the field for Sunday’s season-opener, and Hamlin got this win on the same day he announced a contract extension with Joe Gibbs Racing and sponsor FedEx.

There were two open slots for the Daytona 500 and they were claimed by Corey LaJoie and Canadian driver D.J. Kennington.

LaJoie had the harder road to race into the Daytona 500.

He ran into the back of Reed Sorenson, one of the drivers he was racing for the slot in the 500. It caused Sorenson to wreck.

“I know it looked like I meant to do it but I didn’t,” LaJoie said on his radio. “I was running the middle and he came down on me.”

He said he would have preferred not to have wrecked Sorenson, but insisted it was unintentional and noted the race was his first time in a Cup car at a plate track. LaJoie had to politic through December to get this ride, but still asked Jimmie Johnson to put in a good word for him to help him get a chance to race in the Daytona 500.

So, he wasn’t going to let anything stand in his way of making Sunday’s race.

“I didn’t want to be sipping margaritas on the beach on Sunday. I wanted to be out there racing,” LaJoie said. “If that was my mom, I would probably spin her out to make the Daytona 500, too. That’s just frank. I’m sure I’m not going to be on Reed’s Christmas card list this year, but that’s all right.”

Sorenson was not pleased.

“I guess he felt like he did what he had to do to make the race,” Sorenson said. “I hope he’s proud of that part of it. There’s a lot of pressure going in to making this race. It’s a very big deal for a small team like ours.”

Elliott, meanwhile, was thrilled with his first Cup victory.

“I know this was just a Duel win, and doesn’t mean a lot for the playoffs, but it still means something to me,” said Elliott.

Indeed, this was technically just an exhibition race. But new rules for this season earned Elliott 10 points with the win. NASCAR’s new format this year including a provision that awards points on a 10-to-1 declining scale to the top-10 finishers in Thursday night’s races.

Points were not the goal for Elliott, though. His Hendrick Motorsports team instead wanted to test his Chevrolet to see how strong it will be in Sunday’s big event.

“We didn’t say one word about points before the race,” Elliott said. “We just kind of set out and wanted to race, not ride around.  I think sometimes you ride around and you don’t know what your car is like and if it’s going to be the way you want it for Sunday.

“We took chances and it worked out, so excited for Sunday.”