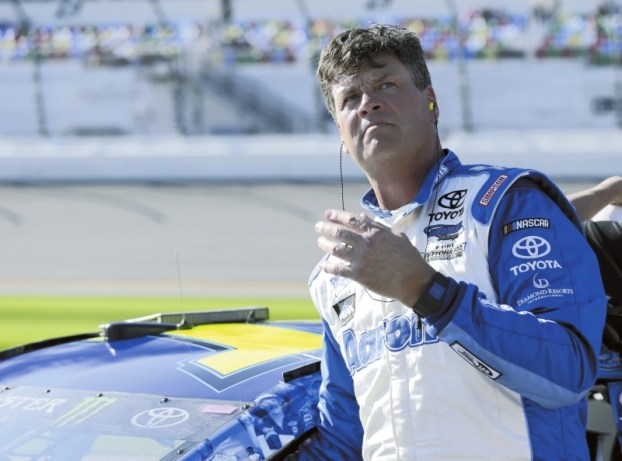 Michael Waltrip looks up at the leader board after his qualifying run for the NASCAR Daytona 500 auto race at Daytona International Speedway, Sunday, Feb. 19, 2017, in Daytona Beach, Fla. (AP Photo/Terry Renna)

DAYTONA BEACH, Fla. (AP) — Michael Waltrip tries not to get too nostalgic or reflective at Daytona International Speedway.

The two-time Daytona 500 winner will make his 30th and what he expects to be his final NASCAR start in “The Great American Race” on Sunday. Waltrip signed a one-race deal with Premium Motorsports, wanting to say goodbye at the track that has provided him triumph and tragedy. Waltrip won the Daytona 500 in 2001, the same day his car owner, Dale Earnhardt, was killed on the final lap, and again two years later in a rain-shortened race.

“I have faced a range of emotion that humans probably aren’t designed to face, and it all happened within 10 seconds,” Waltrip said. “So that’s hard to think about and it’s hard to figure out, but I love Daytona. I’ve been coming here since I was a kid, so every time we talk about coming to Daytona, I get a big smile on my face, which is crazy, but that’s racing.”

Waltrip has a lofty goal for his final race. He wants to run up front and finish in the top 10. If that happens, the 53-year-old driver would “walk away proud.”

One problem: He was 35th in pole qualifying Sunday, hardly the kind of speed needed at one of NASCAR’s fastest tracks.

“Unless our strategy is, ‘We’ve got them right where we want them; they don’t even know we’re here,’ then we might be in a little bit of trouble on this one,” Waltrip said. “But I’m looking forward to trying.”

Waltrip announced last month that this would be his career finale behind the wheel. He didn’t want to go out with last year’s Daytona 500 run, in which he got into a minor wreck and finished 30th.

“I just didn’t want to quit like that,” he said. “I went to Talladega (last year) and we got a 12th-place finish and I ran up front a little bit and then I decided we would just try to have one more competitive run down here this year. You’ve got to quit sometime.”

Daytona seemed like the perfect place to end his career. He won four times in 32 years around NASCAR, with two of them coming at its most famous track. That one of his wins came on one of the worst days in NASCAR history, he can’t do anything about that.

“It’s just what I live with,” Waltrip said. “I wouldn’t call it haunting. It’s just my life. … I think we have a number of days when we’re born that we’re going to live. Everybody has that number and that was Dale’s day, and me winning was the perfect person to win because I just wanted to give him the credit. I still honor him by giving him the credit.

“As I get older, as you think about your day coming up, it’s a pretty good day when you’re watching your two cars drive off to win the Daytona 500 and then you’re in heaven right after that. Obviously, I wish I could have got a hug from him and everything had have turned out different, but that’s just not the way it was meant to be.”

He actually got to celebrate the second one, although the 200-lap event was shortened to 109 by wet weather.

“I know I got the trophy and the check, and they didn’t shorten either one of those,” he said. “Obviously, I would rather the highlight of my Daytona 500 win be like (Denny Hamlin last year) when he makes that beautiful move and wins the race, but you know, that’s just not the way it is. I know on that day the fastest car won the Daytona 500.”

Earnhardt Jr. would ride into retirement if he wins title