UNC pulls away from Louisville in 2nd half 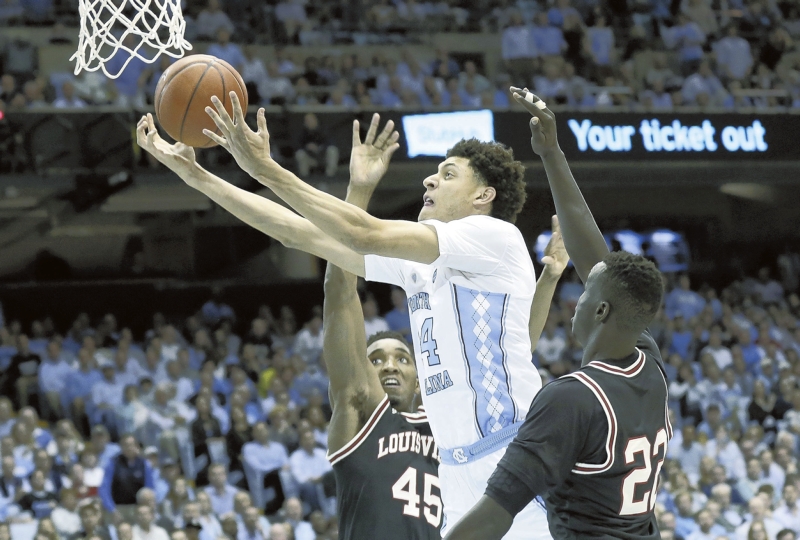 CHAPEL HILL (AP) — No. 8 North Carolina kept hitting the glass, making its free throws and hitting its outside shots.

The Tar Heels played tough enough, too, to push their way past No. 7 Louisville’s physical defense and strengthen their grip on the Atlantic Coast Conference lead.

Justin Jackson scored 21 points and the Tar Heels pulled away after halftime to beat the Cardinals 74-63 on Wednesday night, pushing to a two-game lead in the league standings with three games left.

Kennedy Meeks added 14 points and 10 rebounds for the Tar Heels (24-5, 12-3), who entered the day leading both Louisville and No. 10 Duke by a game. But the Blue Devils lost at Syracuse shortly before tipoff, then the Tar Heels took over with a 13-3 second-half run to break a 40-all tie and lead by as many as 17 points late.

“I feel good yes, that we’re on the top,” UNC coach Roy Williams said. “I’d rather be on the top than third or seventh or 15th, but there’s still a lot of work to do.”

North Carolina shot 37 percent, but made 7 of 18 3-pointers (39 percent) and 21 of 29 free throws. The Tar Heels also dominated the boards after halftime and finished with a 46-33 rebounding advantage, 16 on the offensive glass.

Donovan Mitchell scored 21 points for the Cardinals (22-6, 10-5), who didn’t shoot well after halftime and struggled to make much of anything outside the paint. Louisville made just 5 of 20 3-point attempts and 4 of 13 free throws.

The Tar Heels struggled to get into a rhythm for much of the first half against the Cardinals’ physical defense. But they did a much better job after halftime of getting the ball in the paint, while their outside shooting was solid all night behind Jackson — who finished 7 for 16 from the field and made 4 of 9 3-point attempts.

“Offense is not there every night. Defense is,” Mitchell said. “I think we relied too much on our offense tonight to help us win the game. That’s what Carolina does; they score. Especially at home, they’re used to this environment, and they’re going to score. We didn’t, and we didn’t get stops.”

Louisville: The Cardinals’ defense was good enough to fluster the Tar Heels, but their offense abandoned them. The outside shooting was particularly damaging, though the missed free throws — they started 0 for 6 — loomed large as the Tar Heels made their run.

UNC: The Tar Heels followed a weekend blowout of No. 18 Virginia with another home win against a ranked league team, continuing for a second straight regular-season crown — and maybe a No. 1 seed in the NCAA Tournament.

“Same thing coming into this game, we’re in control,” junior Theo Pinson said of the league standings. “Win games, you don’t have nothing to worry about.”

Pitino had a heated verbal exchange with a fan as he came off the court after halftime, with video posted on Twitter showing an animated Pitino shouting toward the seats before being led into the tunnel.

UNC team spokesman Matt Bowers said a fan was ejected after the incident. Both Pitino and Williams brought up the incident afterward, with Williams apologizing to Pitino in his postgame comments.

“He just got in my face and said something I didn’t like,” Pitino said of the fan. “But I take it from the students all the time. You expect it from students. But from an adult? And then turns his back on me like he’s a coward. And he is a coward.”

“But North Carolina is a classy place, and one person doesn’t speak for the rest of the people.”