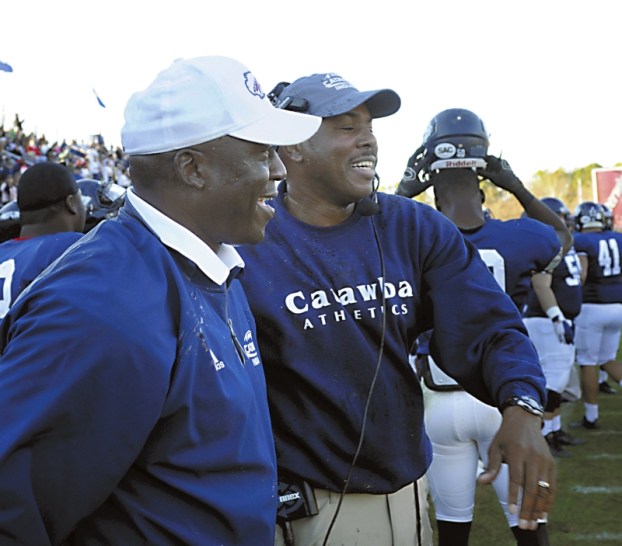 The hiring of Henry as running backs coach completes Lambert’s full-time staff for the 2017 season.

Henry leaves his alma mater, Catawba, after four seasons as assistant head coach on Curtis Walker’s staff. Prior to that, Henry spent 11 years at Wake Forest and six seasons at Ohio University, all under coach Jim Grobe.

In all, Henry has 25 years of college coaching experience.

“Keith brings a lot of experience to our program,” said Lambert. “Having coached on both sides of the ball, he brings an added dimension of a defensive perspective to our offense. We’re really glad he’s coming on board with us. He’s a North Carolina native who’s played in North Carolina and has recruited for many, many years in North and South Carolina. That will be a huge benefit to our program with the relationships he’s built over the years. He’s been very successful and been a part of winning football at Ohio, Wake Forest and Catawba.”

During his 11 years at Wake Forest, Henry served as special teams coordinator in 2011 and also coached the outside linebackers, defensive ends and defensive backs. He helped the Demon Deacons to five bowl games and a 2006 ACC Championship.

“Brad and I go back and had a relationship at Wake Forest,” said Henry. “He’s a great guy, a guy with integrity, good vision and I wanted to be a part of what he’s building down here. He’s got it off on the right track and now we need to keep it moving forward.

“My philosophy is to hold the guys responsible and to help them grow, help them learn, help them be better fathers one day and make them better citizens,” continued Henry. “There’s going to be down days, but I’ve always told my teams: ‘acknowledge it, learn from it and move on’. If we can do those three things, we’ll be successful. It takes steps and I’m willing to be there with them and help them take those steps.”

In addition to Catawba, Wake Forest and Ohio, Henry has coached at N.C. A&T, Charleston Southern and Gardner-Webb.

A 1989 graduate of Catawba with a degree in physical education, Henry was an all-America safety and four-time all-South Atlantic Conference selection. He graduated with a then-school record 398 career tackles and 20 interceptions.

Henry was a prep standout at Maiden High School and began his coaching career at Bandy’s High School after graduating from Catawba. He earned his master’s degree in athletic administration from North Carolina A&T in 1995. He did play professionally in the Arena Football League, spending one year with the Albany Firebirds (1990) and one with the Charlotte Rage (1991).

By David Shaw sports@salisburypost.com CHARLOTTE — The 2017 CIAA tournament has come and gone for Livingstone’s women’s basketball team. A season that never... read more