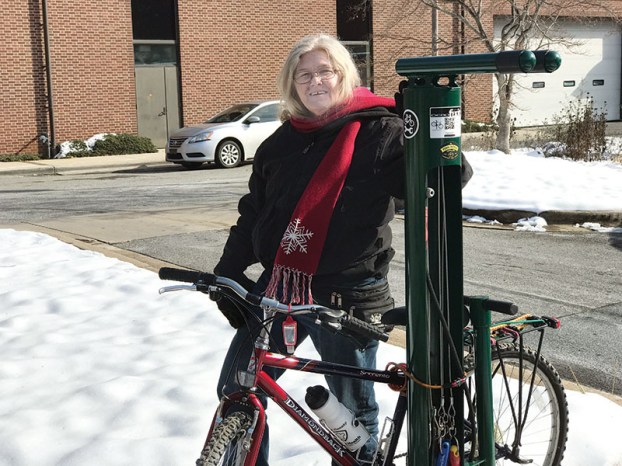 Cindy Williams with her "earn a bike" at the Rowan County Public Library in Salisbury. Photo by Mary Rosser.

Sometimes your bike just needs some air in the tires or maybe your seat height needs to be adjusted to make the ride more comfortable. Salisbury just became more bike friendly with the placement on Thursday of a second bike fix-it station, one of which is available 24 hours a day.

The Pedal Factory, a local non-profit founded in 2015, specializes in its “Earn a Bike” program, providing bikes to people who are willing to work for them. The Pedal Factory provides guidance, tools and repairable bikes for those who need them but only after required hands-on participation.

An extension of the “Earn a Bike” program is the placement of the first two bike fix-it stations. Rhonda and David Harrison, co-founders of the Pedal Factory, first saw the stations in use in Charlotte at the Common Market.

Rhonda said, “After we formed The Pedal Factory and gained some credibility with our downtown location, the most challenging part was educating folks on what a “Bike Fix-it Station” really was. After many rejections on other sites, the Rowan Public Library was open to the installation and we wanted someone who was equally receptive to the project. It was important to us that the site was well-lit and accessible at all hours. It took several months to work out the logistics due to historic and other details, but we finally got everyone’s blessing and were excited to have accomplished it.”

Each bike fix-it station is complete with a stand to hold the bike off the ground, allowing the bike wheels and pedals to spin freely to better make adjustments. A large manual air pump and the tools needed to make minor repairs and fix flats are attached. The tools are cabled to the station and pump is bolted to the actual bike stand. Tools include tire levers, allen wrenches, open-end wrenches and screwdrivers.

Rhonda Harrison said, “Each stand comes with a QR code which helps cyclists find them on a U.S. map of where the stations are located by using their cellphones. This puts Salisbury on yet another map. We’ve already seen people using it firsthand at the library and they indicate that the stand is being used often.”

Pam Bloom, library associate in Children’s Services, said, “The library is the hub of the community. What better place to have a bike repair station. It also serves as a reminder that you could be riding your bike to the library.” Bike rider and library associate for the Bookmobile Vickie Rufty added, “It is the perfect place to catch a drink of water in the library and air in your tires outside. I expect usage to increase even more as warm weather comes.”

Salisbury Community Park and Parks and Recreation got the second bike fix-it station last Thursday. Acceptance and red tape were easy this time around as Parks and Recreation Director Nick Aceves said, “We are excited to partner with The Pedal Factory to offer the residents of Salisbury and Rowan County an amenity that will enhance biking at the Salisbury Community Park. We encourage everyone to get outside and play.” The Pedal Factory Executive Director Mary Rosser and her husband, Todd, installed the station on a two-square-foot concrete pad.

Stephen Brown, Parks and Recreation maintenance director, helped with the set-up and said, “The is a great partnership with the Pedal Factory to install this station. Going forward, users of the mountain bike trails and other cyclists can do small repairs on site. The station makes the park more attractive and helps make Salisbury more recreation and bike friendly. It’s multi-use, also accessible for strollers and even the cyclecross events coming later in the year.” Future possible fixit station sites include City Park, the Greenways and the Civic Center.

Community partners so far include Central Piedmont Builders and the Salisbury Rowan Runners. Eric Phillips of Skinny Wheels bike shop has pledged to sponsor a future fixit station and is partnering with The Pedal Factory on upcoming projects and to create awareness of cycling opportunities in Salisbury and Rowan County.

Rosser also hopes to partner with Parks and Recreation to do events while raising funds to help support the parks. Talks are ongoing about a possible run, bike, run biathlon in the fall. The Pedal Factory has planned a bowling fundraiser set for Woodleaf Lanes on Feb. 18 from noon-2 p.m.

Already Rosser and the Pedal Factory are committed to install the third local bike fix-it station in March between the front door and the bike rack of the JF Hurley YMCA. Rosser said, “I think this will be another great location, speaking as a person who has come out of the gym to a flat bike tire before.”