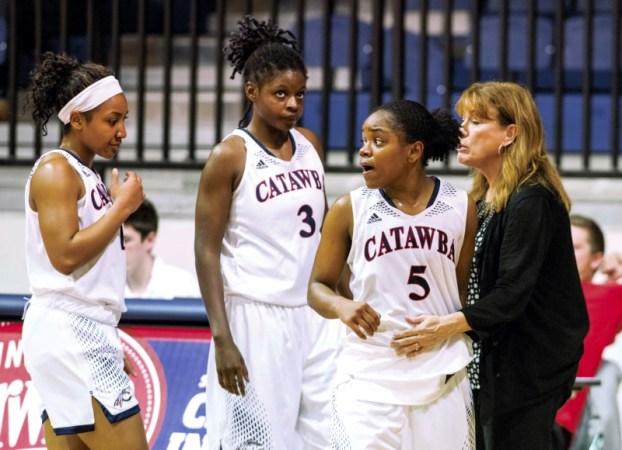 After winning seven of their first eight conference games this season, the Indians have hit the skids the past two weeks — a slide punctuated by their 61-41 loss to visiting Newberry last night.

That it came against Newberry (13-8, 9-8) — a team Catawba trounced on the road three weeks ago — made it all the more confounding.

“Sometimes when things go wrong, they just sort of multiply, like a snowball building up,” Morton tried to explain. “I think that’s what’s happening right now. It’s not a question of effort. They’ve been practicing hard. But we’ve got to get our confidence back.”

And their shooting eye. Catawba made only 15 of 59 field goal attempts and hit only six shots in the second half. Junior forward Terri Rogers (16 points, 11 rebounds) had a double-double, despite shooting 5-for-14 from the floor. Teammate Bri Johnson had a quiet game, finishing with nine points, two assists and no free throw attempts.

“Rogers had 16 but she had to work for them,” said winning coach Sean Page. “Last time … she had 25. We used a totally different defensive game plan tonight. We tried to provide a lot more inside help on Terri and lock up on Johnson. Ya know, let somebody else try to beat us.”

When nobody came forward, Newberry surged to a 28-22 halftime lead and extended it to eight points after three quarters. The fourth period was a train wreck in slow motion for Catawba — it hit only two field goals, the last when freshman Madi Hallman buried a 3-pointer with 5:31 remaining.

“I’m not sure when it started to go downhill for us,” said Rogers, the league’s second-leading scorer this winter. “But I know it can’t just be one or two people. We all have to contribute. It really hurts when we miss easy shots.”

Newberry was sparked by junior guard Nicola Handreck — the Australian native who provided 21 points, seven rebounds, four assists and three steals. She had 15 points at halftime and drained three 3-pointers in a brief, second-quarter sequence.

“They came into our gym and pretty much handed it to us,” Handreck said afterward. “That fueled us. Tonight, we were staying composed, taking the game as it came to us, not rushing shots. We used a lot of ball movement, a lot of passing, and it made them defend us for 20 or 25 seconds.”

Rogers picked up her third personal foul with 2:31 remaining in the first half and was forced to the Catawba bench. It also unleashed Newberry center Meg Essex — a 6-foot-3 sophomore who must be majoring in shot-blocking. She rejected five Catawba attempts and added 12 points and nine rebounds. “She’s a really good rim-protector,” said Page. “She covers up a lot of mistakes.”

“I wish I had an answer for you,” she said outside the Catawba locker room. “It’s frustrating. But I do know we’re not going to put our heads down. We’re gonna fight through this.”

NOTES: Next up on Catawba’s dance card is Saturday’s 2 p.m. game with visiting Anderson, a team the Indians outscored, 77-63, in mid-December. … Newberry has won two straight. Essex is the SAC’s shot-block leader and ranks fifth nationally.