College basketball: Morrison getting it done on and off the court 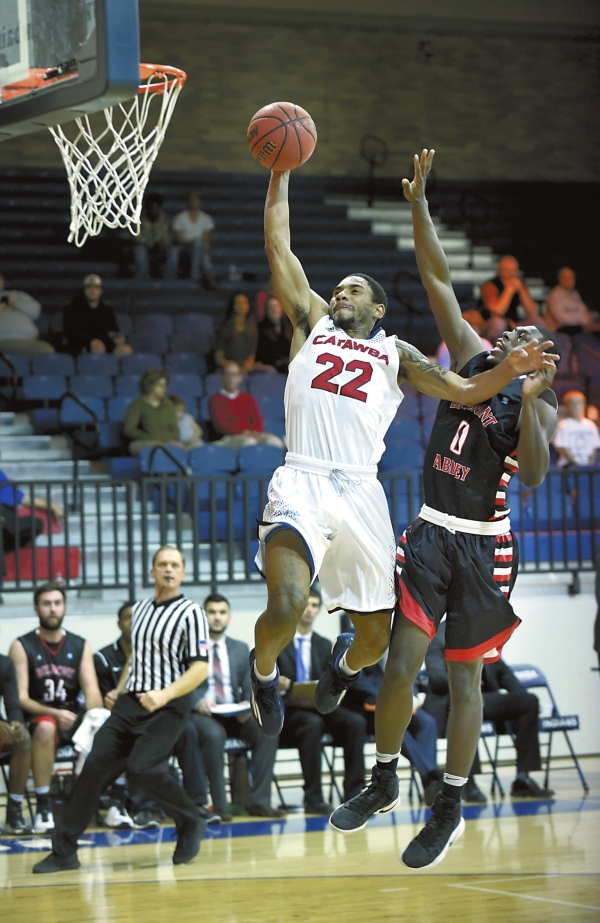 Wayne Hinshaw/for the Salisbury Post ... Catawba’s Jerrin Morrison (22) rises up for a dunk in a game against Belmont Abbey on Nov. 19. Morrison is already a 1,000-point scorer for his career — and he’s only a junior. He scored 17 points in this game, an 82-60 Catawba victory.

SALISBURY — Catawba junior Jerrin Morrison is a little different, on the basketball court and off.

“When Jerrin was here on his second recruiting visit, we were walking a few potential recruits through the Corriher Theater, just showing them around,” Catawba head coach Rob Perron said. “But Jerrin takes a little detour, walks up on the stage and says, ‘I’d like to declare that I’ll be going to Catawba College!’  That was pretty cool.”

Morrison has proven to be an awesome recruit for the Indians, already a 1,000-point scorer as a junior, and one of the more physically  gifted athletes in the South Atlantic Conference. He combines a powerful, 6-foot-3, 200-pound frame with breath-taking leaping ability and a solid  jump shot that he buries from mid-range or long-range.

Morrison, 21, is a success story, a Dean’s List student, as well as a marvelous basketball player who scored 28 points to lead Catawba to a huge road win at Lenoir-Rhyne on Wednesday. But he’s come through a lot of bumps to be where he is now.

He grew up in Charlotte. His parents had split up. He lived with his  mother, Janicea Chisolm, and visited  his father, William Morrison Jr., frequently.

“I grew up on Beatty Ford Road, and that’s considered one of the rougher areas in Charlotte,” Morrison said.

Morrison remembers being a skinny kid  with big ears in elementary school, but by the time he got to East Mecklenburg High, he was a strong, quick athlete. His biggest obstacle in those days was academics. His grades were so poor he was ineligible to play as a freshman.

As a sophomore football player, he made an impact as the  jayvee quarterback. Promoted to a winless varsity team at midseason, he led him team to a victory against Myers Park in his debut.

But it was in basketball that he was special, and he was on the radar for many schools by his junior season. He scored 1,500 points.

Brian Graves was Catawba’s top assistant then. The first decision Perron made after being hired to lead the Catawba program prior to the 2014-15 season was to retain Graves.

“One of the best decisions I ever made,” Perron said.

Catawba had a firm connection with East Mecklenburg, which had produced Antonio Houston, one of the great scorers in Catawba history. Graves headed there to check out the latest prodigy. Morrison and Graves hit it off immediately, but Morrison wasn’t looking to go to a Division II school. Catawba would have to wait a while.

“Jerrin had a disease that I have diagnosed as Division I-itis,” Perron said.

Morrison headed to a post-graduate prep school after finishing at East Meck. He  attended  Believe Prep in Rock Hill, S.C.  He was convinced that would be the springboard to Division I, but it turned out to be a challenging year.

“It was a tough time,” Morrison said. “My basketball skills hadn’t developed yet, and that year was unstable. There were 20 of us living in a house, guys from New York and Florida. Mostly I was hungry. They’d bring food in every Monday, and it would be gone on Tuesday.”

“I probably owe my life to Brian Graves,” Morrison said. “I also got good advice from my father. He told me to never tell Catawba no, and that door stayed open.”

After that year of prep school, Morrison was eager to sign with Catawba. That’s when he got up on stage and announced his intentions.

Then he took the SAC by storm as a freshman in the 2014-15 season, raining 3-pointers and posterizing defenders with  impossible dunks. He made it look easy for a while. He scored 39 points against  Newberry one night, the most by a Catawba freshman in nearly 50 years. He was the SAC Freshman of the Year, averaged 15.5 points per game and led the Indians in steals and blocks.

“I played with a chip on my shoulder that whole season,” Morrison said. “I was a dog on the court.”

His numbers weren’t as spectacular as a sophomore.

“Coaches in this league know their stuff,” Perron said. “They scouted Jerrin, kept him from getting to the spots he wanted to get to.”

An injury robbed him of his unique explosiveness.  He averaged 12.4 points for the season and lost a little of his mojo.

“There were a lot of things going on personally, and I let that sophomore slump get to me,” Morrison said. “The basketball court has always been that place where I could be myself, but I didn’t feel like myself. I wasn’t at my best all season.”

As a  junior, some of that freshman swagger  has returned and the Indians have benefited. Catawba has three outstanding scorers now, with senior K.J. Arrington and junior Jameel Taylor joining Morrison.

Morrison is averaging 15.2 points per game and leading the Indians with 7.2 rebounds per game, which is extraordinary for a 6-3 guy. He’s third on the team in blocks, second in steals. This is the best Catawba team Morrison has played on. The Indians have bonded, they’ve won five straight, and they’ll take a 15-6 record into Saturday’s SAC home game against Carson-Newman.

“We’ve challenged Jerrin to become a more complete player,” Perron said. “If you work on doing the non-scoring things better than  your offense also improves. We’ve asked him to be a more efficient scorer, to rebound more, to limit his turnovers, and he’s having a very productive season. You can’t win in this league with one-dimensional guys, and he’s not a one-dimensional guy.”

Off the court, things are going smoothly for Morrison. He’s passionate about the Freedom School Partners program in Charlotte that encourages reading and achievement. He was part of that program as a youngster. That’s where he read his first books, and he now works as an intern with the Freedom program.

“Books were like vegetables for me,” Morrison said. “Good for you, but I avoided them for a long time.”

Morrison’s father had some doubts that he’d excel in college classrooms.

“He told me that I couldn’t just turn the switch on and suddenly do well academically in college,” Morrison said. “He made me a bet that if  I made all A’s and B’s he’d let me bring a car to school. I made a 3.0 the first semester, and I’ve improved. Now I’m shooting for 4.0.”

An integrated marketing and communications major, Morrison has been asked to give speeches on behalf of the Freedom School Partners, and he’s handled that task as easily as he dunks on a fast break.

“I’ve had opportunities to stand up and meet Corporate America and to ask millionaires and entrepreneurs for donations,” Morrison said.  “I’ve  been blessed with opportunities few college students get, and I’ve made contacts.”

His family remains the driving force behind his success.

His father works for UPS, so he can’t make the Wednesday games, but Jerrin hears his voice in the crowd every Saturday, telling him to either pick it up or calm things down.

His mother works a lot and doesn’t make many games, but Jerrin said she’s planning to come on Saturday.

“She’s only made it to one game this year, and that was only for the second half,” Morrison said. “But I was still  ecstatic to see her here. There was so much emotion overtaking me that I was crying.”

Morrison said he’s come to realize how much the Indians  are a family.

“Coach Perron has stuck with me through everything,” Morrison said. “When my mother had a stroke, he went to see her in the hospital. He’s always been there.”

Morrison teammates once were awed by his gifts. Now they simply appreciate the team player and leader he’s become.

“He still shocks us sometimes,” Taylor said. “But he’s dribbling less, and he’s knocking down more shots. At Lenoir-Rhyne on Wednesday, the hot sign was definitely on for him. He was great. He was making everything.”

Asked about Morrison’s game on Wednesday, Perron shook his head and offered one word — “unbelievable.”

“Jerrin respects the game, treats it right,” Perron said. “And when you do that, basketball will  give you back even more than you gave it.”