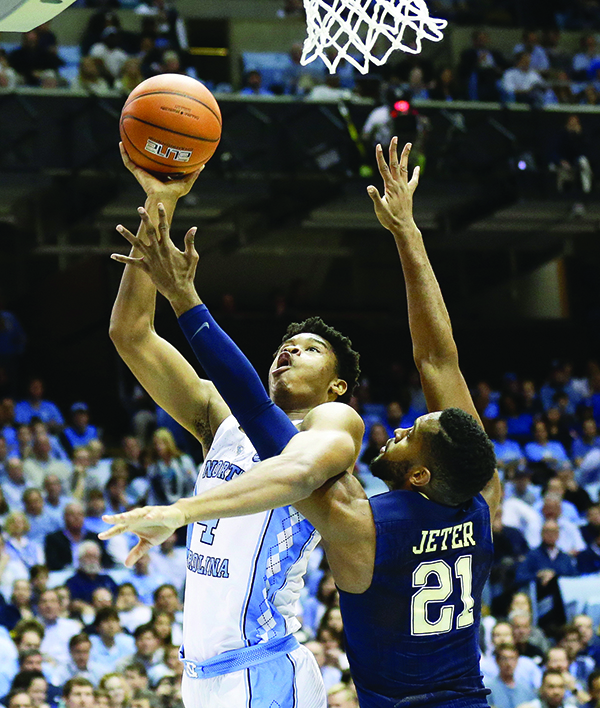 CHAPEL HILL  — No. 12 North Carolina found itself in an unexpected fight down the stretch against the Atlantic Coast Conference’s last-place team.

Coach Roy Williams and the Tar Heels didn’t panic. Instead they embraced the situation, and it led to a gritty victory that might not impress very many people beyond their locker room.

North Carolina held on to beat Pittsburgh 80-78 on Tuesday night behind 20 points from Justin Jackson.

Joel Berry II had 19 points, Hicks added 18 and Kennedy Meeks finished with 10 for the Tar Heels (20-4, 8-2). The league leaders never trailed but also never got comfortable against the Panthers.

Cameron Johnson matched a career high with 24 points and hit a career-best six 3-pointers, Michael Young finished with 19 points and 10 rebounds and Jamel Artis had 17 points for Pitt (12-10, 1-8), which lost its seventh straight but kept this one tight throughout by shooting nearly 56 percent.

The Panthers had a chance to win it at the buzzer after Artis took an inbounds pass with 4.8 seconds to play and hurried down the right side before uncorking an off-balance 3-pointer that caromed harmlessly off the glass.

Coach Kevin Stallings said he told his team with about a minute remaining that “we’re going to have a chance to win this game, and … dang if we didn’t.

“It wasn’t a great shot, but if you had given me a shot to win the game at the start of the night … I’d have signed with a Sharpie,” Stallings added.

That came after Artis made it 79-78 by hitting two free throws with 5.4 seconds left. The Panthers fouled Hicks, who hit 1 of 2 free throws to make it a two-point game and set up the Panthers’ final shot.

Chris Jones finished with 12 points, and his contested 3 with 13.5 seconds left pulled the Panthers to 78-76.

Pittsburgh: This clearly wasn’t the same Pitt team that was routed at home by Miami and No. 6 Louisville. Stallings can build off the way his Panthers went toe-to-toe with the ACC-leading Tar Heels on their home court.

“We’ve had some bad performances, and we’ve had some unfortunate things happen to us, but I’m hopeful they can derive some confidence” from it, Stallings said. “Let’s not take any comfort in the fact that we played well and almost this or almost that. We lost, and until you win, you lose.”

North Carolina: The Tar Heels didn’t answer many questions in this one, especially on the defensive side. Three days after Miami’s rout in Coral Gables, North Carolina had serious trouble stopping the Panthers, and UNC has allowed two of its last three opponents to shoot at least 51 percent.

“Don’t know what I’m going to do, but some way, somehow, got to do a better job of coaching them on the defensive end of the floor,” Williams said.

The Tar Heels played their second straight game without swingman Theo Pinson, who rolled his right ankle last week. Williams says the 6-foot-6 Pinson’s presence would have helped in defending the 6-7 Artis — instead of Nate Britt, who’s 6-1 — and would have made things happen in the middle of the Panthers’ zone that frustrated UNC. Williams says he doesn’t have a timetable for Pinson’s return.

“They’re the best last-place team in the country” — Jackson, on the Panthers.

Berry was coming off a miserable performance at Miami in which he finished with two points and missed all eight of his shots and all four 3s he tried. Berry said he hit the practice court after the team got home Saturday night and took 500 shots, then came back the next day and put up 600 more. “That was one of my lows, and it made me refocus,” Berry said. “It’s not a bad thing, but at the time it was.”

Pittsburgh at Duke on Saturday.

North Carolina: The Tar Heels wrap up a two-game home stand Saturday night with a visit from No. 21 Notre Dame.