One from the heart: Henderson Lentz places defibrillator at North Rowan High 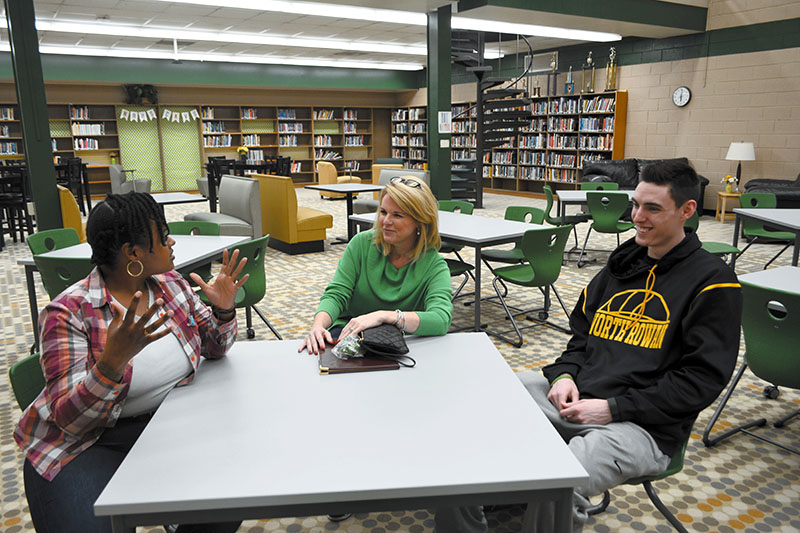 Renoda Burns talks with Jill and Henderson Lentz about the role she played in saving his life. Susan Shinn/for the Salisbury Post

SPENCER — Unless they give or receive a valentine, the fact that February is Heart Month is likely lost on most teenagers.

On June 16, 2015, Henderson collapsed during a basketball camp at Catawba College. He was unresponsive for 12 minutes — dead, really — until a team of people who were all in the right place at the right time helped revive him.

To honor “Hendo’s Heroes,” as he calls them, Henderson has purchased a defibrillator for North Rowan High School, where he is a senior this year — a four-year member of the basketball and baseball teams. The 6-foot, 4-inch shooting guard is having a great season.

Barely a month after he went into sudden cardiac arrest, Henderson began speaking about his experience. He has appeared at churches, basketball camps and Fellowship of Christian Athletes meetings.

Henderson is the son of Greg and Jill Lentz. His dad is an evangelist, and Henderson has been a longtime FCA member.

As a homebound student, he worked with Lydia Adkins, a member of the North Rowan High faculty.

“At first, I was a little concerned about his heart,” Adkins said. “So I got CPR certification just in case. He did as much as he could. He didn’t get behind. He was willing to do whatever it took. He was very much on track with everything. His other teachers sent lessons, and we got together once a week.”

Henderson says he’s not 100 percent sure where he will go to college, but he does want to study exercise science and injury prevention training.

In the meantime, he wants to make sure his classmates, faculty and staff at North Rowan are safe. That’s why he purchased another defibrillator for the school. The existing device is located outside the gym. The second one will be placed in the school’s new addition, several minutes’ walk from the gym.

“It’s a big campus,” Henderson says, “and the gym is so far away from that end of campus.”

The idea came to him while he was hospitalized, he said. “We were at the hospital, meditating on what we should do to make the school environment not only safer for me but other students when I graduate.”

A plaque with a photo of Hendo’s Heroes will be placed with the second defibrillator. Henderson hosted several fundraisers, including “Hendo’s Hope,” a heart-healthy fair in 2016, to raise the $1,500 needed to purchase the unit.

The members of Hendo’s Heroes include Renoda Burns, an off-duty EMT who just happened to be at Catawba that day; head coach Andrew Mitchell, along with assistants Bubba Morris, Bill Kesler and Pastor Tim Bates; Maxine Lentz, Henderson’s grandmother, a retired respiratory therapist; and Brenda Paider, who interned as a Catawba trainer.

“Every time I see any of them, I try to be as nice as I possibly can,” said Henderson, smiling again.

He even read scripture at Morris’ wedding.

“I went off-script, and I also spoke about how important Bubba was to me,” he said.

Henderson admits that he was surprised how expensive defibrillators are. “I guess you can’t really put a price on saving a life.”

The device has been ordered and should arrive sometime in February, Jill Lentz said. Until Henderson’s incident, she admits she didn’t even know what one was. That’s why she and Henderson want to promote both the importance of knowing CPR and having a defibrillator nearby.

Jill Lentz is interested in supporting legislation that would require all students to graduate with CPR certification. But Henderson decided the best way to honor his heroes was with the placement of the defibrillator. Henderson also carries one in his car now.

“Not necessarily for him,” Jill Lentz said, “but he’s gonna end up being somewhere he may need it.”

“I was helpless,” Jill Lentz said. “If it had been just Henderson and me at home, we would not have had the same results. It was divine the way it occurred.”

Although Henderson had an internal cardioverter defibrillator for a while, it had to be removed because of infection. He was cleared to return to the basketball court in December 2015, and he’s had no other problems since.

“It’s just made me have a whole new outlook about how blessed I am to have every day,” Henderson says. “Every heartbeat I have is a gift from God. You’re not promised tomorrow. You don’t really understand how quick things can happen. I had no warning. I felt perfectly fine the whole time. I had no pain. This has strengthened my faith and made me realize how precious life really is.”

The Sunday before, Henderson says, the sermon was about being broken for God. “I went to the altar and asked for a testimony to reach my friends and teammates. On Tuesday, I had cardiac arrest. It’s been one of the best things that’s happened to me, because it’s opened doors for me to go speak at schools and share Jesus with others.”

“If you come with an open heart,” his mother says, “God will use you.”

Henderson’s larger goal, he says, is to grow the foundation that he and his family started, to sponsor defibrillator placement and CPR education for AAU teams.

“Teams play in all of these small gyms, and there’s no equipment there,” he said.