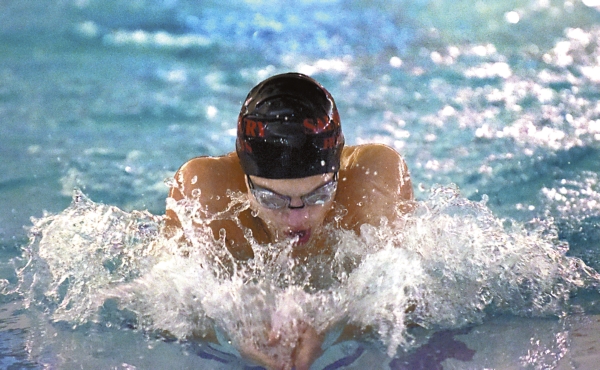 Wayne Hinshaw/for the Salisbury Post ... Salisbury’s Ethan Knorr, shown winning the 200-yard individual medley on Thursday at Hurley YMCA, led his school to its first Rowan County swim championship since 1998. He set school and county records in this event (2:01.44) and in the 500 freestyle (4:49.78).

SALISBURY — The conversation between Salisbury boys coach Ryan Starrett and girls coach Sallie Pittman before the Rowan County Swim Championships went something like this:

“I think you’re going to win it,” Pittman said.

Now Pittman is letting the “I-told-you-sos” fly.  Starrett says he’s more than OK with that.

South had won every county meet that had been contested since 2003. There were two years when no meet was held.

Salisbury has elite swimmers in Ethan Knorr, Roarke Burton and Keegan Dillon, but the county meet scored 12 places and three entries were permitted per school in each event. Starrett was skeptical that the Hornets were going to have the necessary numbers to make the math work.

“You can get those first places, but it’s also important to fill every position, and we were fortunate to have three swimmers in all but a few events,” Starrett said. “We have only 21 swimmers (that’s boys and girls combined), and that  means all our swimmers have to be diverse and swim in a lot of events.”

Knorr, a junior who already has been Rowan County Swimmer of the Year twice, was the shining star. He broke school and county records in both of his individual events — clocking 4:49.78 in the 500 freestyle after his 2:01.44 in the 200 individual medley.

“The county meet  is always tough, but it’s also fun,” Knorr said. “You can hear the crowd, and I was trying my best to go fast I did OK.”

Knorr swam even faster than he did on Tuesday when he led the Hornets to the Central Carolina Conference championship by a wide margin.

Knorr’s partners in the 200 medley and 400 frestyle relays — Dillon, Burton and Joe Steinman — helped Knorr go 4-for-4 on the day and  helped the Hornets pile up points. Points are doubled for the relay events.

Burton seized control in both the sprints — the 50 and 100 freestyle races — while Dillon won the 100 breaststroke and added a runner-up finish in the 50 freestyle.

“In the 100, Burton won by seven seconds, so he was having to push himself,” Starrett said. “But I guess that’s a good problem to have.”

The Hornets also unveiled a secret weapon — Roshen Amin. He had no posted seed time, but he won the 100 butterfly.

Amin was  a mystery man because he’s a freshman and because a broken arm kept  him out of competition until recently Amin, Steinman and Adam Drye went 1-2-3 in the butterfly.

Steinman and Amin finished behind Knorr in the 200 IM for another Salisbury 1-2-3 sweep, and that was tough to overcome.

South’s second-place finish for new coach Jarrod Smith was fueled by Blaise Bumgardner, who won the 200 freestyle and teamed with John Fulton, Noah Severt and Cameron Hurd to take the 200 free relay. Bumgardner placed second behind Knorr in the 500 free.

South’s Christian Reynolds was second in the 100 backstroke.

Connor Kuehl’s win in  the 100 backstroke was a highlight for third-place Carson. So was the effort of Andrew Hastings, who swims with an artificial limb. Hastings, a swimmer since age 10, helped Carson take second  place in the 200 free relay.