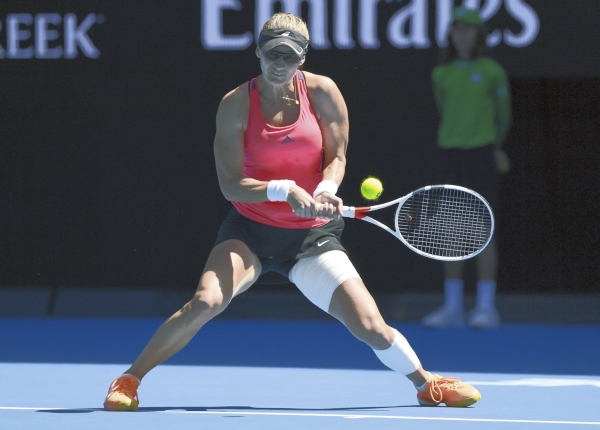 Lucic-Baroni back in Grand Slam semifinals after 18 years

MELBOURNE, Australia (AP) — Mirjana Lucic-Baroni is back in the semifinals of a Grand Slam after a nearly 18-year wait, beating fifth-seeded Karolina Pliskova 6-4, 3-6, 6-4 to advance to the last four at the Australian Open.

The 79th-ranked Croatian collapsed to her knees after serving it out and broke into tears in a post-match interview on Rod Laver Arena.

Lucic-Baroni swept to the semifinals of Wimbledon in 1999 at the age of 17, but she was never able to build on that early success. Within years, she was out of the sport completely and wouldn’t play another Grand Slam match until 2010.

“One day I will say a long, big story about the things that happened to me,” the 34-year-old Lucic-Baroni said after the match, her voice cracking. “I never could dream about being here again.”

The pair combined for 14 service breaks in an up-and-down match before Lucic-Baroni, whose left leg was heavily taped, left the court midway through the third set for a medical timeout.

When she returned, she won eight straight points to hold and get the final break of the match and then put a rosary around her neck to serve the match out.

Lucic-Baroni next faces either Serena Williams or Johanna Konta, who played later Wednesday in the last women’s quarterfinal.

If Williams wins the quarterfinal match, it would be the second time Lucic-Baroni has faced a player with 22 majors in the semifinals of a Grand Slam. She lost to Steffi Graf in her 1999 Wimbledon semifinal match before the German player fell short in her bid to win her 23rd major title against Lindsay Davenport.

Williams, who is currently tied with Graf with 22 majors, is trying to reach her 10th consecutive Grand Slam semifinal, a streak that began at the 2014 U.S. Open.

Rest for Patriots as they begin Super Bowl prep for Falcons