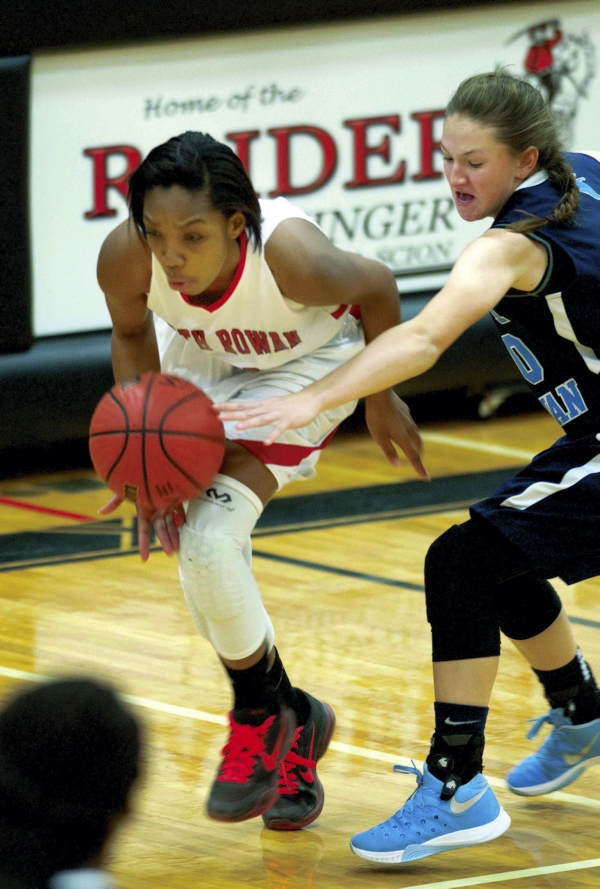 MT. ULLA — In a game of extreme peaks and valleys, West Rowan’s Mary Sobataka made sure her team finished on top of the mountain.

The sophomore guard scored a game-high 21 points, hit a clutch 3-pointer to send the game into overtime, then nailed the foul shots at the end to preserve a tense, 86-83 win over county rival South Rowan Friday night.

The victory kept the Falcons in the top half of the standings in the South Piedmont Conference, just a couple of games out of second place.

Sobataka’s biggest contribution, however, had to be her defensive success against South Rowan super sophomore Janiya Downs in the second half. Downs scored a career high 38 points in the game, including 31 in the first half alone, but cooled down in the second half when West went to a box-and-one with Sobataka shadowing her every step.

“We knew we had to shut her down somehow,” Sobataka said of Downs,” because she was their biggest factor. She was hard to deny because she is so big and quick but that’s what we had to do.”

The true turning point came early in the fourth quarter when Downs picked up two fouls in rapid succession to disqualify her from the game.  West (11-4, 6-3 SPC) trailed by 10 at the time with 6:24 left, but surged into a 64-64 tie after that.

The Raiders regained their offensive footing behind speedy guard Tazah Hardin, who gave her team a 71-68 lead with just 5.5 seconds left in regulation. But with the clock clicking down, Sobataka raced the other way and pulled up for a jumper from about five feet outside the three-point line at the top of the key. The ball swished cleanly through as the buzzer sounded to tie the game, 71-71.

“Mary played that great box-and-one on Downs then had enough left to to hit that three at the end and it was a long one,” winning coach Ashley Poole stated. “It was a great comeback effort for our team.”

In the extra period, West went ahead for good, 77-76, on a three-point play by forward Egypt Alexander — who finished with 20, including 17 in the second half. Freshman center Abigail Wilson then capped a 13-point, 14-rebound game with back to back buckets to expand the lead to 83-78.  South cut the margin to 83-81 on a 3-pointer by Hardin but Sobataka iced the outcome by nailing 3-of-4 free throws in the final 30 seconds.

“We had our chances to salt it away in regulation with our free throws but then Mary hit that clutch three at the buzzer,” said Raider coach John Davis. “But I give my girls credit for battling and fighting back. I think we gave the crowd tonight their money’s worth.”

The roller coaster nature of the game featured a red hot 11-0 start by the Falcons right out of the gate. Then Downs got hot and pushed her team ahead, 23-20, after the first quarter. She then closed the first half with 10 straight points to put South ahead, 39-30, at the break.

The third quarter was even more impressive for South as it exploded to a 19-point lead, 57-38, with under a minute left in the period. But West started their comeback with eight straight points behind  Alexander to close within 11.

“We weren’t trying to think about the score so much,” said Alexander who came alive in the second half offensively after managing a mere three free throws in the first half. “We just kept pushing the ball. I just could not get in the groove in the first half so I decided to go up strong, hoping I could get the foul.”

West ended up getting plenty of fouls as they went to the line 35 times, connecting on 25, while three South starters fouled out, including Downs. The Raiders hit 13-of-19 from the foul line.

Behind Sobataka, Alexander and Wilson, Miyanah Pruitt was also in double figures with 10. Downs dominated the Raider’s scoring with her 38 while Hardin added 18 and guard Riley Corriher had 12.

The two teams have a rematch looming at South next Wednesday but it will be hard to top the dramatics of this first meeting.