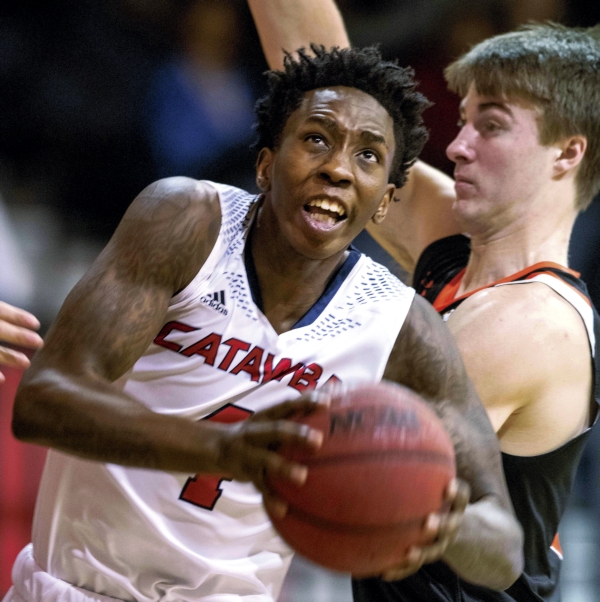 SALISBURY — It was hard to find words to describe a six-minute, second-half lull that could have proved disastrous for Catawba’s men’s basketball team.

“It was like we made four straight double bogeys,” said coach Rob Perron, opting to use a golf reference.

Fortunately, Catawba made some birdies in the first half and took care of  Tusculum, 84-71, on Saturday at Goodman Gym.

The victory lifted Catawba (12-6, 6-6) back to break-even in the South Atlantic Conference.  K.J Arrington poured in 26 points for  the Indians, who got 16 from Jameel Taylor, 13 from Andrew Ingram and 11 from Rock Brown.

Catawba almost ignored the 3-point line, making only four 3s in the game and zero in the second half. But the Indians finished drives and smashed the Pioneers on the boards. Catawba outscored Tusculum in the paint, 50-30.

“Catawba is a team that beat Newberry on the road on Wednesday (100-99), and they’re a very talented club that is starting to play together,” Tusculum coach Michael Jones said. “Everyone’s going through the league for the second time now, and Catawba has so many experienced guys that they know how to handle that. Catawba is peaking. I wish I could say that about my own team. We’re not playing well.”

Catawba’s first half was stout on both ends of the floor. Catawba shot 53 percent while making just two turnovers. Tusculum missed 21 of 30 field-goal attempts, and those misses frequently resulted in transition buckets for the Indians. Taylor, Arrington and Brown were soaring and soaring. Catawba led 48-31 at halftime.

“They were driving the ball right at us,”  Jones said. “Anytime you go to the locker room down 17, you’ve done yourself a disservice. We played quite a bit better in the second half, but that first half put us in a hole. It cost us the game.”

When Gilbert McGregor swished  a 15-foot jump shot with 15:37 remaining, Catawba led 58-39 and appeared on the verge of securing a breezy victory, but then the Indians went cold.

“We stopped doing Catawba things,” Perron said. “I don’t think we got giddy, but we weren’t as aggressive. And give Tusculum credit. They did a good job of fighting back.”

“We started making a few shots,” Jones said.  “That cut down on Catawba’s transition game, and we were getting some stops if we could set our  defense. They weren’t just going straight to the rim on us.”

The drought continued for the Indians, and two free throws by quick Tusculum point guard Kendall Patterson (18 points) and  a layup by Caleb Hodnett off a dish by Patterson sliced Catawba’s lead to 58-53 with 9:54 left. The crowd was getting nervous.

Jerrin Morrison didn’t have a huge scoring game (nine points) for the Indians, but he made the biggest shot. With 9:34 remaining, and with Catawba’s dry spell six minutes old, Morrison jump-stopped in the lane, elevated and swished a short jumper to restore the lead to seven points.

“Guys did a good job of clearing a gap for me and I drove and made that little 8-foot floater,” Morrison said.  “We just needed a bucket. We got complacent after we built that big lead and we stopped attacking.”

Tusculum got within five again, but this time Ingram answered with a driving shot.

Tusculum had the ball, down six, with 3:32 remaining, when Catawba got the game’s key defensive stop, Again it was Morrison. Tusculum got the ball to 6-foot-5 veteran Cory Fagan on the right baseline, isolated against the 6-3 Morrison. Morrison was ready. He’d been watching film of Fagan for two days.

“Fagan is a great player, but I’d studied him and I  knew his tendencies,” Morrison said. “When he gets the ball there, he’s coming over his left shoulder with a baby hook. I was able to  contest the shot, and it came up way short.”

Taylor rebounded  that miss, started a fastbreak, and Arrington glided in for a layup. Catawba led by eight.

The Indians took care of things from there. Some stops and deadly foul shooting pushed the lead back to double digits.

But things were getting scary when Morrison finally ended that long string of futile possessions.

Catawba played without Malik Constantine, who has had no luck with injuries. He sprained an ankle at Newberry. He’ll miss about three weeks.

“He came down on someone’s foot at Newberry,” Perron said. “It’s unfortunate, but we hope to have him back for the stretch run.”