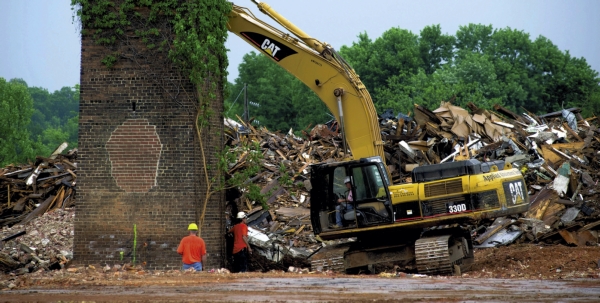 Demolition crews prepare to take down the smokestack at the former Cannon Plant 7, once known as Kesler Mill, in Salisbury in this 2009 photo. Photo by Jon C. Lakey, Salisbury Post.

SALISBURY – The City Council heard an update on the work of the Environmental Protection Agency Brownfields Assessment grant during the meeting on Tuesday.

The city was awarded the $400,000 three-year grant in 2014. The program funds are used for environmental analysis of former industrial and commercial sites. It is a tool to spur interest in revitalizing vacant or underutilized properties where contamination or the potential presence of contamination has discouraged interest, according to meeting documents.

The funds were evenly divided between hazardous substances and petroleum funding. Potential developers can receive liability protections and property tax exclusions on improvements made to the property over a five-year period for completing the terms of a brownfields agreement with the program, according to meeting documents.

An environmental assessment was done in December 2015 on the Kesler/Cannon Mill site. They found localized areas of soil contamination, but the biggest problem was the asbestos found in large debris piles on the site.

The company is developing ways to address site cleanup, which would include community input. A community visioning session has been tentatively scheduled for March 2.

The second site was the Empire Hotel. Morici said low level contamination of the groundwater soil was found, but that should not stop the redevelopment of the site.

“The bigger problem with the Empire Hotel is the asbestos-contained materials within the building,” Morici said.

Morici said the developers of the hotel, Historic Preservation Partners Holdings LLC, who announced signing a purchase agreement for the property in August, already know about the asbestos and are working to resolve the issue.

An underground storage tank was found at the Schaefer Iron Works site. Morici said his company identified where the tank was and helped the developers with redevelopment plans that took the tank into account.

Asbestos-containing materials were also found in the Duncan/Monroe Street School site, but only in two small areas.

“It appears that the school probably was – or the asbestos in the school was probably remediated at some point in its history,” Morici said.

There are lead-based paint concerns, and an underground storage tank and neighboring gas station might also present some issues.

Morici said he will work with a group out of the West End to come up with redevelopment plans and what would be needed to clean up the site.

The groundwater contamination at Newsome Road did stop progress on the proposed extension and improvement project. Morici said his company helped the developers get liability protection and other documents through the North Carolina Brownfields program and the project is now moving forward.

A total of 18 environmental assessments have been completed, with 20 acres assessed and about eight of those acres ready for reuse.

The current grant will end on Sept. 30, 2017, and Morici expects that all grant funds will be used before that date. The city has already applied for another assessment grant for $300,000 to extend the program for another three years.

Morici said though the process is even more competitive for entities that have already been given grants, he is optimistic that Salisbury’s success with the grant will “be considered favorably.”