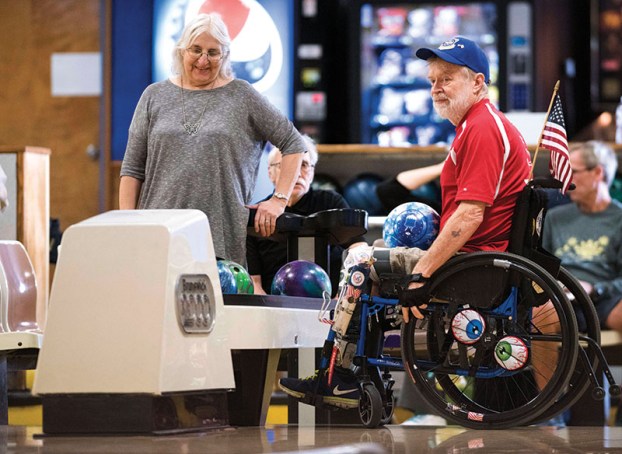 Veterans go bowling with league of their own

Woodleaf Lanes has had all kinds of bowling leagues over the years. But there has never been a league that focuses on veterans. Until now, that is.

Chuck Powers, sales director, said, “My dad was a World War II veteran and bowling was very popular when they came home. I have been involved in bowling for 42 years and thought it was time to do something to honor these incredible men and women.”

Powers and Woodleaf Lanes have set a Jan. 23 starting date for the veterans’ league. An organizational meeting will be held at 5:30 p.m. and bowling will start at 6 p.m.

Powers added, “We want to get the new league off the ground. There is room for 30-40 participants who will be on four- or five-person teams. We are currently taking registrations. The league will run for 16 straight Mondays.”

A free bowling session was held this past Friday at Woodleaf Lanes. About 15 veterans have already signed up and Powers offered them a chance to practice among their peers. Buck Keziah, a disabled Air Force veteran, exhibited his ability to bowl from a wheelchair. He has participated in the National Veterans Wheelchair Games three times and has returned with a silver and two bronze medals over those three competitions.

Although Keziah has only been bowling since 2014, he credits it and other activities as life changing for him.

“I lost my leg to diabetes and spent way too much time sitting and using a remote,” Keziah said. “My kids will tell you that dad is having way too much fun since he lost his leg. My vision is poor and I have to line up my wheelchair as I prepare to bowl.”

But bowl he does and consistently scores high with his practiced release once the chair is in the proper place.

Keziah’s “very significant other,” Navy veteran Barbara Brown, is also set to bowl in the league. She said, “Buck is the nicest man you have ever met and bowling is the best thing that has happened to him. We met while working out at the VA hospital. He has since moved across the street from the VA so that he can work out more.”

Keziah works with Mrs. Mallory in a program called Adaptive Sports and is looking for an outside wheelchair more suited to those sports. Brown has her own plans to participate in the Golden Age Games in Biloxi, Miss., this coming May.

“Our goal is to get these men and women together. We have been trying to get the league started for two years,” Reynolds said. “Often veterans will talk more to each other than they might to others. If they need help, then this will be step one of the process.”

Reynolds is a Marine Corps veteran who was disabled in a 1982 minefield explosion in Cuba. He served his country from 1972 to 1986. Reynolds, an avid bowler, started his veterans outreach ministry six years ago. He and fellow ministers, Richard and Sheila Gould, will all bowl in the league.

Woodleaf Lanes will offer special arrangements, including reduced fees, for the veterans who want to participate.

Richard Gould said, “We aren’t veterans but both our fathers and our son are. We know that people are happy when they are bowling and we can see the veterans here are already enjoying themselves. My wife and I realize that often the best thing that we can do is listen.”

He knows bowling, having started setting pins manually about 61 years ago. He has been bowling since the 1970s.

The league isn’t just about bowling.

“People can come out and watch, support the veterans and honor them,” Sheila Gould said. “We need to thank them as often as possible.”

She is getting back into bowling again after a long layoff.

Lene’t Adams is heading an effort to find sponsors for the league and for trophies and a banquet upon completion. She also is working to send athletes to the National Veterans Wheelchair Games. About 20 athletes from the VA attended last year at an estimated cost of $1,800 each. Lodging, flights and transportation of equipment are costly. Adams can be reached at 305-788-9965 or LIAdams@laneconstruct.com.

Marine Corps Vietnam veteran Dwight Floyd, known as “The Old Man,” has been bowling for over 60 years. He’ll be bowling in the new league and says, “This is going to be all about a three-letter word. Fun!”

‘We need to start eating this elephant:’ School board looks at capital needs

By Rebecca Rider rebecca.rider@salisburypost.com SALISBURY — While some things are looking up for local schools, the Rowan-Salisbury Board of Education... read more