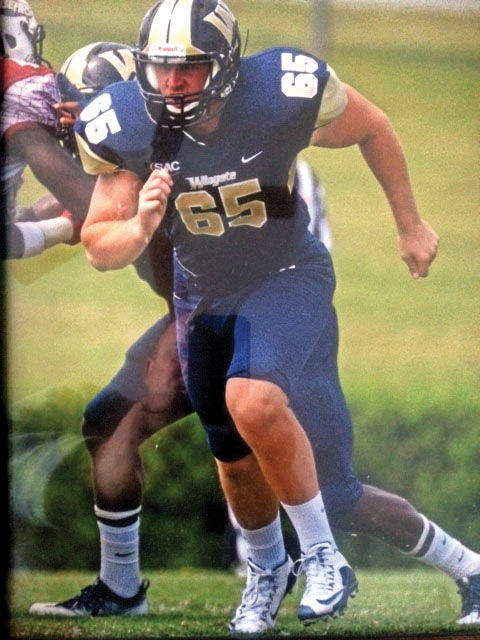 WINGATE — All the players involved have pro football aspirations, hopes — and dreams —  but the Dream Bowl in Virginia Beach, Va., actually gets its name because it is played annually near the Martin Luther King Jr. holiday.

King delivered the “I Have a Dream” speech during the March on Washington for Jobs and Freedom on Aug. 28, 1963, and those words, more than 50 years later, are familiar to every American fifth-grader.

Rowan County will have a representative in the Dream Bowl, a college all-star showcase for FCS, Division II and Division III players. He wasn’t a star in high school at Carson, and chances are good you never heard of him during his four years as a starter at Wingate University. But he’s quite good — maybe even pro good — at a specific skill. He’s 6-foot-3, 240-pound long snapper Timothy “T.J.” Bell.

“I got an e-mail informing me I’d been selected for the game,” Bell said. “We had two Wingate guys compete in the Dream Bowl last year, so I’d heard about the Dream Bowl. Then I read up on it. Then I contacted one of  the Wingate guys who had played in the game — Mathu Gibson. He said he had a great experience. He recommended that I pursue it.”

Gibson is a poster child for Dream Bowl success. A 6-foot-6 offensive lineman, his performance in the 2016 Dream Bowl helped him get an invitation to the New York Jets rookie mini-camp. He didn’t make it with the Jets, but that exposure got his foot in the door. Last August, he was signed by the Denver Broncos.

Registration for the Dream Bowl cost Bell $650, but it seems like a reasonable investment in his future. That fee includes four nights worth of meals and lodging, transportation and the banquet for players and families.

At the very least, Bell is going to come away with memories for a lifetime, plus an official Dream Bowl game jersey and hoodie. At best, well, there’s a lot of potential upside. There will be combine on Jan. 12 run by pros, which means there will be certified reports and evaluations on Bell. That’s no small thing for a Division II long snapper.

“When I was in high school, I never really believed I’d have this kind of opportunity,” Bell said.

He was mostly an undersized offensive lineman, although he also had some senior success as a defensive end. The best game of his life came at defensive end when he had double-digit tackles and helped Carson (4-8) win against West Iredell.

“I just picked it up because it was an area where our team was lacking,” Bell said. “My uncle (West Rowan AD Todd Bell) is the one who helped me get started with it. He taught me the basics. He showed me how to set up.”

As a high school senior, Bell weighed 180 pounds, so college football didn’t look like a realistic option. But college teams need long snappers, and Bell was getting proficient at that skill and learning to love that role.

NFL long snappers are able to fire a spiral to the punter 15 yards away in a span of 0.7 and 0.8 seconds. On field goals and PATs, the distance is 7 or 8 yards.

A long snapper stands with his feet wider than his shoulders, with one hand on the laces of the football as if he’s going to throw a pass between his legs. The other hand guides the ball.

“It’s a job most people don’t want,” Bell said. “You only get noticed when you mess up. That snap has to be fast and it has to be on point.”

And once the long snapper has gotten the ball to the punter, his next job is to sprint downfield in punt coverage.

“That’s the fun part of it,” Bell said. “You might get to hit someone.”

Bell remembers driving to Wingate with his family to talk to coaches about the possibility of long-snapping for the Bulldogs.

“They needed a long snapper, and they told me to come out for the team so they could take a look,” Bell said.

He was the backup long snapper for about two weeks in his first camp. But then he was named the starter.

“We had Hunter Haffly long-snapping, but Hunter also was a receiver and a holder, so we decided to take a look at our freshmen candidates,” Wingate coach Joe Reich said. “You’re never sure about a freshman, but T.J. was really performing well in practice, and we just said, ‘OK, T.J. is our guy.’ ”

He was still undersized for Division II football. Wingate defensive coordinator Rashaan Jordan told Bell he had a choice. Get bigger or get trampled.

Bell didn’t get trampled and he proved reliable and durable beyond anyone’s expectations. Reich didn’t have to worry about long-snapping accidents for four seasons. During his career, Bell made efficient snaps on critical punts, go-ahead field goals and game-winning extra points.

“I was always nervous, every game, until that first snap,” Bell said. “Once that first snap was behind me, everything was fine. The biggest games for me were the Catawba games, especially when we played at Catawba. All my family would be there and I was playing against one of my workout partners and best friends — (former Carson offensive lineman) C.J. Cain.”

Bell grew every year, both is skill and size. Wingate’s strenuous workout schedule didn’t leave him much choice.

Lifting weights, along with natural maturity, gradually transformed Bell into a different person. Now he’s 60 pounds tougher and stronger than when he started at Wingate.

Since the season ended, Bell has been snapping three or four times each week to stay sharp. Teammates and friends have been glad to assist him.

He will finish work on a degree in criminal justice in the spring, but for now, his mind is still on football. He’ll head to Virginia Beach on Wednesday to get settled in. The scouting combine is Thursday. The Dream Bowl will be played on Saturday.

Unlike some all-star games, the Dream Bowl has no limitations on play-calling, blitzes and coverages. So it will be real football. The squads have been split into “Patriots” and “Crusaders.” Bell will wear the No. 59 jersey for the Crusaders.

He hopes to impress scouts this week. His dream since childhood has been to become a state trooper, but he won’t mind if football delays that dream.

From staff and wire reports CHARLOTTESVILLE, Va.  — London Perrantes is a point guard first, and when that meant he... read more