Local stores sold out of sleds 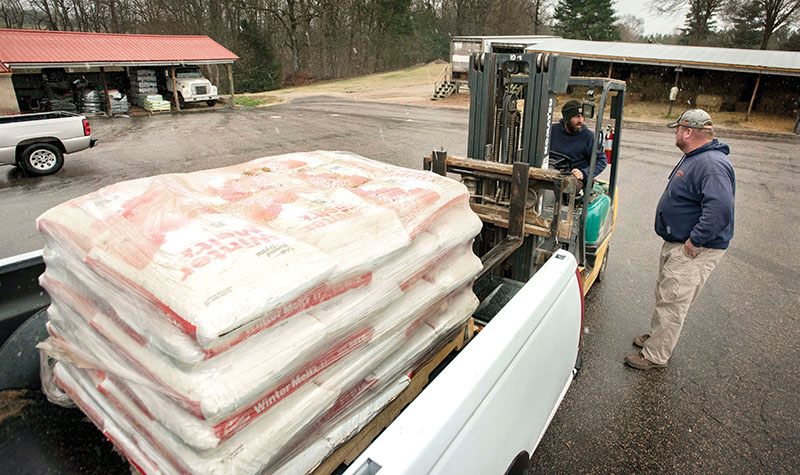 JON C. LAKEY / SALISBURY POST Ben Watts loads a pallet of ice melt on the back of Randall Beaver’s truck at L.L. Goodnight & Sons in China Grove on Friday in preparation for the upcoming snowstorm.

CHINA GROVE – The demand for snow sleds on Friday left many stores sled-less.

Stores around Salisbury either do not sell sleds or ran out relatively quickly, but L.L. Goodnight & Sons at 605 Saw Road still had plastic sleds Friday afternoon.

Hilda Goodnight said people had been calling all day asking if the store had sleds in stock. By afternoon, there were only 30 sleds left – 16 of the longer, rectangular shape and 14 circular – and Goodnight said families were buying them about five at a time.

The warehouse where the company usually buys its sleds had run out by Friday.

The store did have wooden sleds, but they did not sell as well because they are more expensive.

“Those are the good kind,” Hilda Goodnight said.

Karen Arnette and Mitchell Hundley bought two plastic sleds for Arnette’s 7-year-old niece, 10-year-old nephew and 26-year-old daughter. It was Arnette’s daughter who asked her to pick up a couple of sleds. She called four or five places before finding them at Goodnight & Sons.

“Everybody wants to get enough so they don’t have to leave home,” he said.

Randall Beaver, owner of Beaver Boy’s Lawncare, drove up to Goodnight & Sons to pick up more ice melt as the first of the wintry mix started to fall. Beaver’s truck had a snowplow attached to the front. He said he had been pretreating areas all day. Beaver mainly works from China Grove to Concord and has contracts with businesses including Pizza Hut and DaVita, a dialysis service center.

Beaver said his wife had already bought their grandchildren sleds for the snowy weekend.