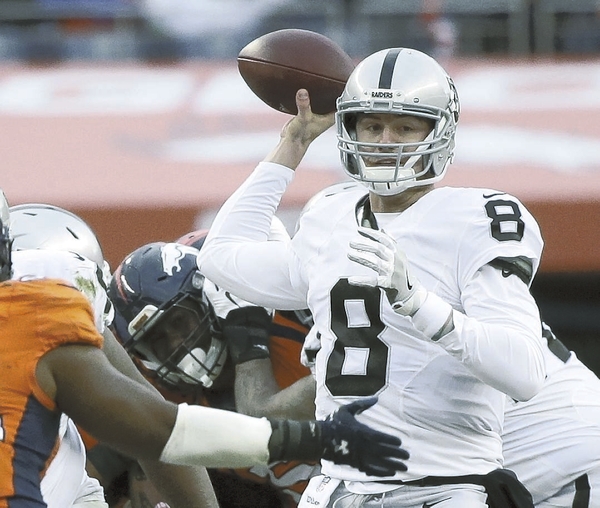 AP Photo/Jack Dempsey, File ... In this photo from last Sunday, Oakland Raiders quarterback Connor Cook passes against the Denver Broncos in the first half their NFL game in Denver. The Raiders play the Houston Texans in a Wild Card game today at 4:35. Cook is the first rookie to have his first start come in a playoff game.

Wildcard round gets going as Super Bowl drive begins today

NEW YORK (AP) — The drive to the Super Bowl begins this weekend as the NFL postseason gets going.

A dozen teams still have hopes to play for the Lombardi Trophy in Houston on Feb. 5.

On Saturday, the playoffs open as Oakland travels to Houston and Detroit heads to Seattle.

This is the fourth time the Texans have opened the playoffs as the early game on Saturday. And the Raiders have returned to the postseason after a lengthy absence, but are starting a rookie at quarterback.

Despite making the postseason for the second time in three seasons, Detroit is looking for its first playoff win since 1992. And the Seahawks are in the playoffs for the fifth straight season.

And the wild-card round finishes with Pittsburgh playing at home against Miami and Green Bay hosting the New York Giants.

The Steelers enter the playoffs on a seven-game winning streak and are the heaviest favorite of the weekend against the Dolphins, who are also short-handed at QB.

And the Giants’ top-10 defense will face a significant test at Lambeau Field against Aaron Rodgers and the surging Packers.

The Patriots, Chiefs, Cowboys and Falcons all earned first-round byes and will watch and see whom they play in the divisional round.

Largely considered to be the most underwhelming of the wild-card games because of the matchup at quarterback. Because of injuries, rookie Connor Cook will start for the Raiders, becoming the first QB in NFL history to make his first start in a playoff game. And he will face the league’s top-ranked defense.

Brock Osweiler, who struggled for Houston after signing a $72 million contract, will start with Tom Savage out with a concussion. Houston looks to win a playoff game for the first time since 2012 season.

Both teams enter the playoffs in a slump.

Detroit lost its final three games of the regular season to miss out on the NFC North title and the chance to host a playoff game. Detroit hasn’t won a road playoff game since 1957.

Before that last-season slide, the Lions made the key plays when it mattered as they won an NFL-record eight times when trailing in the fourth quarter or overtime.

Seattle split its final six games to close the regular season and its Week 16 loss to Arizona cost it a first-round bye. Seattle is 5-0 in the playoffs at home since 2010 and has won at least one game in each postseason appearance under coach Pete Carroll. Since 2012, the Seahawks are 7-3 in the playoffs.

With the game-time forecast of around 20 degrees, the Dolphins put footballs used by the team’s place-kicker and punter in a freezer before practice to simulate conditions for Sunday’s game.

Ajayi is one of four players in NFL history with three games of at least 200 rushing yards in a single season.

The Steelers are 34-23 in the postseason, tied with Dallas (34) for the most total playoff wins all time.

The Steelers’ offense led by quarterback Ben Roethlisberger, running back Le’Veon Bell and wide receiver Antonio Brown will be in the lineup for the first time in a playoff game.

The teams have a rich playoff history going against each other. The Packers have a 4-3 edge in playoff games. The Giants won the first one and the NFL title in 1938, beating the Packers 23-17. The Packers won the next four games and NFL championships in 1939, ‘44, 61 and ‘62.

And the teams have met twice in the past decade in the postseason. Both games were at Lambeau Field and both times the Giants won en route to taking the Super Bowl after the 2007 and 2011 seasons. Temperatures are forecast in the mid-to-low teens for this matchup.

The Giants are back in the playoffs for the first time since that 2011 run under first-year head coach Ben McAdoo, who replaced Tom Coughlin. McAdoo was a Packers assistant under Green Bay’s Mike McCarthy from 2006-13.

The Packers enter the postseason on a roll. Green Bay finished 6-0 in the regular season and clinched the NFC North title.

Aaron Rodgers led the way as he completed 71 percent of his passes with 15 touchdown passes and no interceptions.

“Inside the pocket he can shred you, he can make all the throws,” Giants linebacker Jonathan Casillas said.

“To think that such a good passer, you would think they’d get him out of the pocket, damper him, or put some type of uneasiness about him — but no, he’s very comfortable outside the pocket.”

1995: This Duke not those Blue Devils