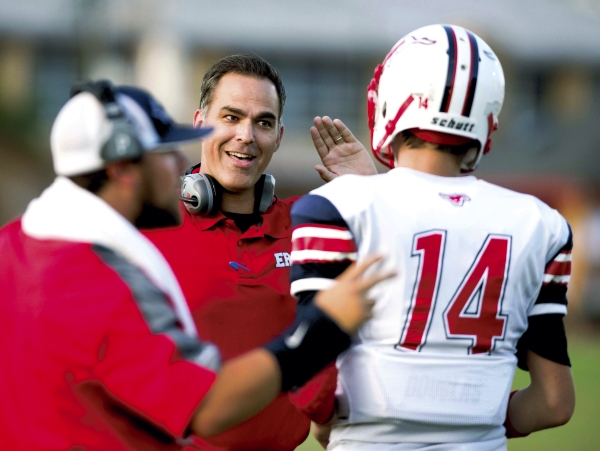 That was the final score on a cold, mid-November night in Morganton in 2014. It was a victory by an underdog team that went on the road with a 5-6 record. It came at the expense of an undefeated club that was a No. 2 seed and seventh-ranked in 3A.

It was a shock-the-world sort of triumph that went a long way toward making Kenneth McClamrock, a rookie head coach, the Rowan County Coach of the Year in a county that included some of the best coaches the county has ever seen.

East went 7-7 in 2014, but with a lopsided romp against West Rowan, two road  victories in the playoffs and a fight-to-the-end loss in the third round of the playoffs at South Point, it was a pretty glorious 7-7.

At that point, McClamrock seemed a good bet to be East’s coach forever, but it wasn’t to be. McClamrock resigned this week. The reason is family.

“Family” takes in a  wide range of things, but it’s accurate in this case. There’s a tendency to think the worst whenever a coach unexpectedly steps down, but there  hasn’t been any misconduct of any sort.

“Coach McClamrock hasn’t done anything wrong,” athletic director Chad Mitchell said. “We accept his resignation with regret. He’s been a great influence on our football program and an excellent role model for our student-athletes. He has a family situation that requires his full attention, and we respect  his decision to prioritize the needs of his family. We were fortunate to have a coach of his caliber, and we wish him and his family the best.”

McClamrock informed Mitchell and East principal Julia Erdie of his resignation decision on Tuesday. They read a statement from McClamrock to the team on Wednesday.

McClamrock is currently on leave from East. It’s a leave of absence likely to last  into the spring.

“I talk faith, family and football, in that order, a lot,” McClamrock said. “I know that sounds like a cliche, but it’s the truth. Resigning as East’s head coach is the hardest decision I’ve ever had to make, but it had to be made. Family is the priority right now, and I have family matters going on that merit my full attention. The next few months are crucial for this football program, and I won’t have the time to give the football team the attention that it deserves.”

McClamrock was hired in March, 2014. It was, at the time, a surprising, even controversial hiring, as East had popular in-house options available who were known quantities. McClamrock was an experienced assistant coach, 12 years at North Mecklenburg and Concord as a disciple of Glen Padgett, but he’d never run his own program.

It turned out to be a solid hire. McClamrock quickly put his stamp on the football program and the school, not only as a dynamic coach, but as a social studies teacher. He won over players, parents and fans, even the ones who had wanted  East’s administration to go in a different direction.

“I’ll forever be grateful that East’s administration hired me, and I can’t say enough positive things about East, the school, the staff and the kids,” McClamrock said. “Our football players bought in. They gave me everything they had. I just wish their effort had translated into a few more wins.”

After that 7-7 debut, East was 3-8 and 4-8 the last two seasons for a 14-23 mark in McClamrock’s three seasons. The Mustangs were better than it sounds, but the South Piedmont Conference is a tough place to carve out gaudy records.

“Obviously, we had special guys that gave me moments I’ll never forget,” McClamrock said. “But I’ll remember every kid who played his heart out for me. Hopefully, they’ll still call me 10 or 15 years from now when they have a wedding or have a kid.”

It goes without saying that it’s not all about wins and losses. The head football coach might be the most important person a school has, after the principal. Athletics keep kids in school.  Football teaches all sorts of positive lessons about teamwork, discipline and responsibility that last long after the Friday night cheers have subsided.

“We took steps in the right direction,” McClamrock said. “I think East is a better football place today than it was when I came here. Our football players did things in the classroom and the community  people never expected them to do. We got some kids thinking about college that hadn’t thought about college.”

Jake Boltz,  a hard-nosed linebacker who was one of the  standouts on the 2014 team, is now a student at East Carolina. He said his experience playing for McClamrock was wonderful, even though he was moved from carrying the ball to tackling people.

“It’s just really a blessing that I got to play under him, even if it was just one year,” Boltz said. “He always put the player first and made sure that every single one of us were successful on the field, in the classroom, and in  our future beyond high school. My senior year was the most unforgettable football season I’d ever played thanks to all the work and time he put in to make us all better. We progressed from game to game.”

Boltz was  part of two teams that made long  bus rides to Freedom, the one that lost in the first round in 2013 and the one that proved just about anything can happen in a high school football game in 2014.

McClamrock’s message to the team before that 2014 game at Freedom is worth remembering.

“All week long, we talked about if it’s a one-touchdown game with four minutes to go, we’re going to win the football game,” he said. “We wanted to see what we were made out of.”

The Mustangs found out they were made of the right stuff.