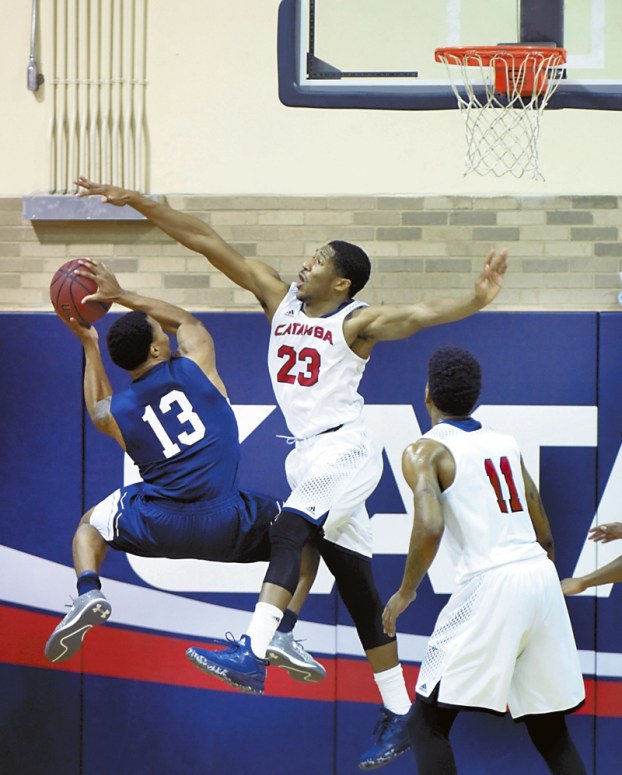 “Chances,” moaned Catawba coach Rob Perron after the South Atlantic Conference defeat. “We had our chances.”

“We were ready for them, and it was disappointing not to get this win,” Catawba senior K.J. Arrington said. “It wasn’t anything that Queens did. This one is on us. We let it get away.”

Jameel Taylor led the Indians with 24 points and nine rebounds. Arrington scored 17. Jerrin Morrison, who was banished after a fracas in the final seconds, had 11 points and eight rebounds.

Jared Hendryx scored 23 to pace five Royals in double figures.
Perron believed the key stat in the game was going to be turnovers and told his team that a positive turnover differential of five would win the ballgame. As it turned out, Catawba won the turnover battle, 21-13, but still lost on the scoreboard.

“We played really hard,” Perron said. “Our guys were excited to play, but we played a little hyper. We were throwing some 100 mph fastballs to each other on fastbreaks. We made too many hyperactive mistakes, and they cost us.”

Queens won the struggle on the glass and also out-shot the Indians to take a 38-32 halftime lead. The Royals controlled the half, but Arrington or Morrison made a big shot whenever it appeared  the Royals were going to achieve separation.

Queens pushed ahead by 11 points early in the second half, but 3-pointers by Arrington and Jordan Barber sliced the deficit back to five points, and Catawba doggedly stayed within striking distance.

When Taylor attacked the rim and made two free throws with 10:02 remaining, Catawba finally owned its first lead and had momentum.

Todd Withers, a 6-foot-8 forward, was the key guy as Queens withstood Catawba’s  surge. Scoreless in the first half, he nailed three  3-pointers with the game up for grabs. His second one right after a media timeout gave Queens a 61-57 lead and his final one put the Royals ahead, 66-59, with 6:11 remaining.

“I believe Withers is going to be a pro, with the size he has,  the range he has, and the quick release he has,” Perron said. “We knew we had to make him bounce it. We couldn’t let him catch and shoot.”

Arrington short-armed a point-black chance in the lane  a minute left that would’ve gotten the Indians within two points, but Queens, long and athletic, altered shots all night and blocked six.

Taylor’s driving layup with 20 seconds left on the clock got the Indians within 78-75, but a free throw by Jalin Alexander gave Queens a four-point cushion with nine seconds left.

“We didn’t capitalize on so many chances and didn’t execute on some things in our scouting report,” Taylor said. “We missed eight free throws and we missed  so many layups.”

Morrison missed on a 3-pointer from the top of the circle with four seconds left and was certain he’d been fouled on the attempt. Then emotions boiled over after Hendryx secured the defensive rebound for Queens.

Barber tried to tie Hendryx up and was called for a foul with two seconds left. When Queens guard Mike Davis got involved, he was hit with a technical foul, and there was pushing and shoving. Morrison was called for a flagrant foul as things got physical.

“Queens is one of the best teams in the country, but we feel like we are too,” Arrington said. “That’s who we are now, and I believe  that’s why we got frustrated at the end. We know we let it slip away.”

NOTES: Perron said Constantine aggravated an earlier foot injury, but his absence is expected to be short term, hopefully only a game or two. … Catawba hosts Brevard on Saturday.