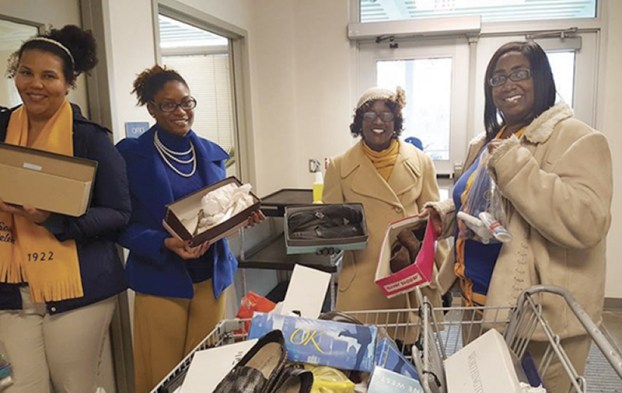 Soles for Little Souls is a signature program of the Sigma Public Education and Research (SPEAR), a 501(c)3 affiliate of Sigma Gamma Rho Sorority Inc. The local chapter donated more than 150 pairs of shoes in support of this annual event.

The children toured the firetruck under the firemen’s supervision and were given school supplies after answering questions from the attendees.

She passed out ornaments made by the cadets and answered questions and discussed crime safety. Officer Cooper  encouraged the audience to support children interested in the police cadet program.

Local Sweet Frogs danced with the children and took photos.

Post Auxiliary members Tonya Clodfelter and Terry Love, along with Post legionnaires, served hot dogs, chicken, drinks and cookies. Fruit, candy, toothpaste and toothbrush bags were given to all the children as they left.

The children played games and danced to the music by Comrade Baig. Each child was given a chance to sit on Santa’s lap (thanks to Harold Broadway Jr.) and hace their photo taken. Each child received gift wrapped, age appropriate presents donated by the Post and local merchants.

Special recognition was given to the following for their donations and /or financial support to the program: 5 Below, Steppin out Social Club, McDonalds, (Forest Organization,) Tracy Heweitt, The Eloganze Club, Gail and Chanaka Yatawara.

During the annual American Legion Convention last year, Post 107 won the community and children and youth awards for meritorious service.

When most people think about Christmas, the majority consider it to be all about the children. When preschool teacher Lori Mason considered a Christmas service project for her class, several options came to mind.

There was preparing an Operation Christmas Child box, filling and sending a goody bag to a child affected by Hurricane Matthew, or gifting a local veteran with little or no family. After much prayer and advice from W.E.E. Center director Jessica Casey, the decision to keep this project local was made.

Mrs. Mason, whose preschool class consists of 14 three-year-olds, sent letters to each family with information regarding the veteran she had chosen. His name is Chuck Steele, a Vietnam War veteran, sci-fi fanatic,and avid NASCAR fan.

Mrs. Mason says when the idea first came up, she had hoped the class would donate enough to be able to purchase gifts such as a warm blanket, hat, gloves, a scarf and a smidge of candy. She was pleasantly surprised when her class donated upwards of $150. With such a big donation, the above items were purchased but also included a new jacket, pants, flannel shirt, a stocking full of toiletries and a teddy bear.

Mrs. Mason brought all the items to class along with boxes and wrapping paper and had a wrapping party with the kids. They loved it!

Items were delivered to Mr. Steele as the State Veteran’s Home on December 21.

There will also be the installation of officers, followed by a pizza party. All seniors 50+ welcome. Free. For information contact 704-216-7714.

Two stories about Bert make one smile: Bert was born in Savannah, Ga., and her mother’s name was Hannah; a beautiful woman, barely five feet tall.

But when Johnny Mercer — also from Savannah — wrote his famous song “Hard-Hearted Hannah,” legend has it he was inspired by her! She must have been a remarkable woman.

The very first “bash” was created and held in honor and in memory of Bert by Rachel, and at that event, Foster Owen played “Hard-Hearted Hannah” on his banjo, to the delight of everyone.

Later, when Bert rode the Queen Mary to Europe, Clark Gable was also a passenger — and guess who got to dance with him?!

The classic annual fundraiser is scheduled for Saturday, Jan. 7, beginning at 6:30 p.m. in Hedrick Auditorium at Catawba College.

By Deirdre Parker Smith deirdre.smith@salisburypost.com Time for the annual best books list. The past year was tumultuous, on all fronts,... read more